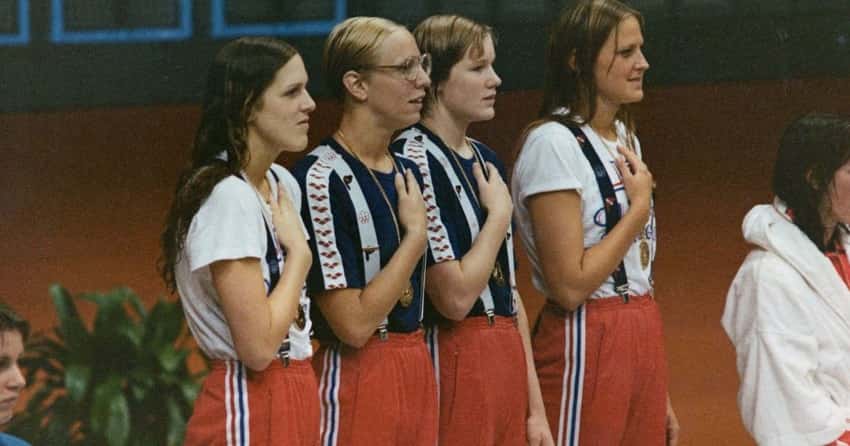 How do you swim when you are lined up against a much faster swimmer in practice?

What’s your mindset like when standing on the block about to race an invincible opponent?

How do you perform when the swimmers in the next lane, and the country they represent, have been so dominant during the Olympics that they completely swept the podium in an event? Went 1-2 in another six races? Won the medley relay by almost seven seconds?

In this kind of blowout situation a lot of us would find ourselves sitting on the edge of the pool, feet dangling in the water, that blank, defeated thousand-yard stare splashed across our face. So much for this.

Crushing defeats happen to us all. Those moments where we are a body length lead behind on the start. You take your first breath and the swimmer next to you is waving goodbye with their ankles. Shortly to be followed by thoughts of, “Why do I do this sport, again?”

Some swimmers throw in their soggy towel when faced against a competitor that is head and shoulders above them.

But the women on the US swim team at the 1976 Olympics didn’t do that.

No one would have faulted them if they had. The East Germans had been thoroughly stampeding the best the world had to offer that week in Montreal.

On the final night of swimming events, the Americans were still without a gold medal. The last event on the program was the 4x100m freestyle relay, an event that on paper had all the markings of another East German beat-down.

Leading off would be Kornelia Ender, the “wundermädchen” (Wonder Girl) of the East German gold medal winning machine. Earlier in the meet she’d broken her own world record in the 100m freestyle for the tenth time.

When you compared personal best times, there was no way the Americans could threaten for gold. In the medley relay they had been thoroughly trounced, losing by several body lengths.

And yet, that’s just what happened.

Competing Against a Superior Opponent

The dominance of the East Germans that week at the Montreal Olympics is hard to overstate.

In one example, the winner of the 400m individual medley, Ulrike Tauber, had slashed almost ten seconds off the world record since the previous year. Her winning time, 4:42.77, would have easily won the men’s race eight years earlier at the Tokyo Olympics.

Although there was suspicion that the East Germans were cheating, among the swimmers there was little doubt. The gong-show performances were simply too good to be true. In just a year the GDR program had gone from middle-of-the-pack contender to veritable superpower/smothering the podiums.

Four years earlier at the Munich Olympics the GDR women had collected just three individual medals. The following year, 1973, at the first FINA World Championships in Yugoslavia, they took home a staggering 28 medals.

The domination continued three years on in Montreal, where the East German women won 16 individual medals, seeing gold in every individual event except the 200 breaststroke. The dramatic rise was limited to the East German women, and not their male counterparts, making the GDR claims of revolutionary and advanced training techniques dubious.

“It was pretty well accepted among the swimmers that, yes, they were using steroids,” said Lauri Siering, an American breaststroker who swam on the medley relay in Montreal. “The East German swimmers came out of the locker room and they were so big, they looked like wrestlers,” added her teammate Shirley Babashoff [1].

Although it may have been obvious to those on the pool deck and in the locker rooms, governing bodies hesitated to point fingers. Developing overnight superpower status—on just one half of the swimming program—wasn’t enough. There had been no positive tests to use as evidence of malfeasance.

The GDR’s state sponsored doping system, managed by the state secret police, was a well-oiled machine, described as the Manhattan Project of athletic performance and doping. Athletes were tested before they were sent out for competition to make sure performance-enhancing substances were sufficiently masked and flushed.

Anyone who tested positive was pulled from international competition, a press release swiftly justifying the withdrawal because of a “training injury.”

“We knew it for years; we weren’t stupid,” said Sherm Chavoor, one of the leading US coaches of 1970s. He coached Mark Spitz and Mike Bottom among other Olympic legends. [2]

The tension manifested into some testy exchanges through the media. When public criticism noted the East Germans deep voices, an East German official replied, “We came here to swim, not to sing.”

Speaking up incurred you the label of being a sore sport. When Shirley Babashoff said that “at least we look like women” the media branded her Surly Shirley. [3] Time Magazine ran a picture of her and branded it “Loser.”

Babashoff was likely the swimmer who lost out the most that summer in Montreal.

A generational talent, the 19-year old was as versatile as she was outspoken. At the US Olympic Trials she ran the table in the freestyle races with American records in the 100, 200 and 400m events. She took down the 800 freestyle world record and won the 400m individual medley.

But her performance in Montreal was silver. Four times, in fact. All behind East Germans.

On the last night competition Babashoff would have a final chance to win gold.

All it would take is a miracle.

The East German strategy in the freestyle relay was simple. Eliminate any pretense that there was a race for gold by leading off with the world record holder, Ender. Extend the lead with Petra Priemer on the second leg, who’d placed second in the individual event.

Establish dominance with an early lead and don’t look back.

As the race got underway, Ender swam as expected, leading off with a 55.79, just a tenth off her world record. The Americans were already over a second back.

The second American swimmer, Wendy Boglioli, clawed back four tenths on Priemer, splitting a blistering 55.81. The Americans were now just half a body length behind.

Off her flip turn Jill Sterkel’s high speed stroke rate burst the Americans out to the lead. The rising anticipation of an upset spread through the 10,000 in attendance at the Montreal Olympic Pool. It had been a long week of total domination by the East German women, and now there was a chance, just a chance, that the streak could be shattered.

Sterkel charged for the wall, splitting a monster 55.78, putting the Americans into a half second lead.

On the block, waiting to dive into the water to swim the anchor leg, was Babashoff.

Claudia Hempel of the GDR next to her.

Babashoff flew off the block and charged down the length of the pool, the crowd on her back, Hempel at her hip.

That’s as close as it would get.

Breathing every three strokes, Babashoff stormed to a 56.28.

When she reached for the touch-pad she didn’t need to turn her head to see if she had touched first.

The week had been dominated by the East Germans, crushing the world in one race after another.

But for one moment, one race, the world had stood firm.

The Takeaways for Swimmers

The relay of 1976 is an extreme example of swimmers who are forced to compete against athletes in an unfair situation. But it’s not a big stretch to take that same sense of “this is unfair” and apply it to the experiences we all swim across from time to time in the water.

There are moments in the sport that are flat-out unfair. That’s just part of the deal. For as much as I preach about the importance and benefits of hard work there are going to be times where we get into the water with a swimmer who doesn’t work hard who also kicks our butt.

For Shirley Babashoff, her best was all she could do. She went best times that week in Montreal. Even though her criticism of the East Germans has been vindicated after the fall of the Berlin Wall, she did swim on one of the greatest relays of all time, swimming her best in the face of an invincible opponent.

And maybe that’s how history will remember her.

Perhaps not as a swimmer who was cheated by cheaters, but as someone who persevered in the face of unfairness, a swimmer who faced an impossible opponent and worked their butt off anyway.

Success is felt by the level of adversity we face.

By this metric, Babashoff and the relay team of ’76 achieved one of the greatest victories in the history of our sport.