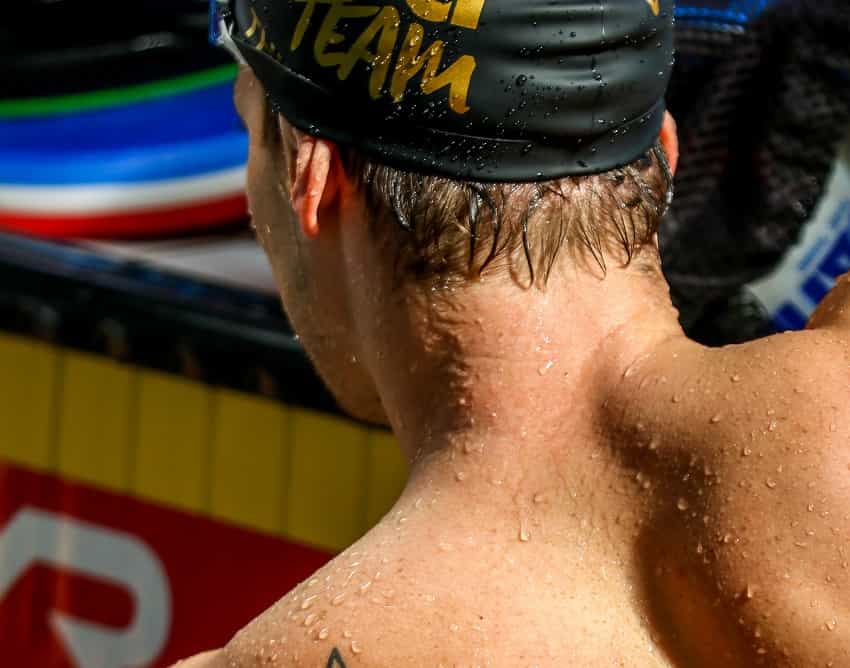 Got a perfectly reasonable email from a swimmer recently: 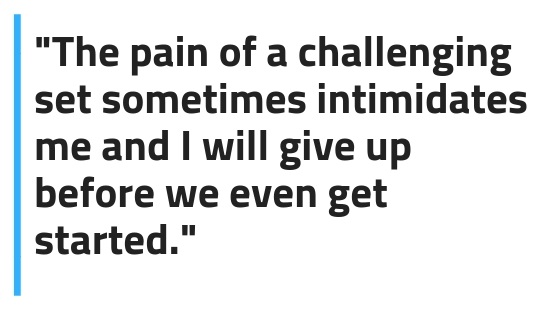 Oh, buddy—I doubt there is a swimmer out there who hasn’t experienced the shock and aww heck no that happens when coach writes up some preposterous main set up on the board.

The agony, the ouchies, the out-of-breath’ing… All of it. Three rounds through. Butterfly.

There are a few different reasons why that big grease-ball of a set intimidates you, including pure, unadulterated laziness.

But I’m gonna assume that you aren’t lazy, and that you are simply not putting that pain into proper perspective.

Can you take the set or practice one lap at a time?

When that smelly pile of a main set makes you feel wee and intimidated, it’s typically because you are thinking about the sum total of the effort and pain required to complete the whole set or practice.

Instead of looking at the set as a series of individual laps and reps, you are mentally tallying up the pain and effort of every rep stacked one on top of each other.

It’s no surprise that when you think about sets and workouts this way you’re gonna experience some heavy-duty reluctance and a deep feeling of being overwhelmed.

The trick to this is simple, but not always easy. It’s using something called “to the wall” thinking. (TM pending!)

The key is taking it one step, one rep, one lap at a time. This concept isn’t new—you’ve likely been told to focus on one thing at a time before, right?

Think about just this lap, this stroke cycle, this repetition.

“To the wall” thinking requires you to take a much narrower point of view with your swimming and dial things down to the present lap or rep. Not the last one or even the next one.

This one and this one only.

Here’s an example to illustrate what I’m talking about.

If I was to write up a set that was just one lap with awesome technique as fast as you can, what’s your reaction? No sweat, totally doable.

Right? How about two laps? Three? Okay, starting to stretch it a little…

How about a hundred? Erm, ouchies.

Notice how you went from yeah, I got this to I already can’t feel my legs?

This is the mindset you gotta take with you during those tough sets.

The funny thing about exclusively focusing on this rep or lap is that you will feel less anxious when tough sets come up.

You will also swim faster.

Your brain is constantly evaluating and judging how much effort to spend.

When you think about having to do a 10,000m for time and your brain runs the math at how much effort that will require it’s no wonder that your mindset takes the 14a exit for Screwthisville.

The brain, as smart as it can be, doesn’t instinctively understand the difference between managing the pain of one rep versus trying to slam it down all at once like a milkshake.

And as a result, will subconsciously slow you down. Not by much, but just enough. Just some light brake-tapping.

Thinking to the wall will benefit you far beyond just dealing with those difficult sets in practice—you will also get the seriously sweet side-benefit of being more mentally prepared for the stress and anxiety of competition.

Now, for the second thing…

Sometimes it isn’t the physical pain you are actually fearful of.

That big set, that big scary workout—it’s not always the pain that it includes that has got ya feeling a little apprehensive. It’s the idea that you are going to work your tail off and not be successful.

Let’s say that coach has ya doing ten 50s from a dive, the goal being best average. That’s a tough set—going all out from the blocks over and over again is sure to result in some serious lactate and some heavy panting.

You are more worried about not swimming as fast as you hope and think you should be swimming, which in some brain-fart kind of way is scarier than the pain you will experience along the way. (Which, by the way, passes within moments of the set being completed…)

What if I push myself to the point that there is an 8/10 chance I am going to hurl into the pool gutter, and I still don’t swim as fast as I think should have?

The physical pain of a hard set is quite fleeting—exertion pain passes within moments as you lay out-stretched on the cold pool deck. A minute, maybe two and your breathing is relatively normal again, and your heart rate quickly descends.

But that fear of failing?

Well, that stings for far longer.

Giving your all on a set and not swimming as fast as you think you should have—I would argue—is more fearful and agonizing than the exertion pain from working hard.

We worry about wasting all that effort for a disappointing result. We worry that if we don’t perform as well as we think we should, that somehow our big, end goal is also now at risk.

Of course, if you step back and logically think this through, the flaws quickly become apparent.

If you do pursue your swimming to the point of failure you will never experience the outer limits of your talent and ability. Failure in practice shouldn’t be feared.

It’s precisely the place where you should be chasing it, in fact.

When that main set looks epic and gnarly, focus on performing the first lap or rep to the best of your ability. Once that is done, focus on the next lap. And so on. Avoid the urge to jump ahead mentally.

Failing in practice is okay. Training is where you are battling with your limits, constantly poking and prodding what you think is capable. Those tough sets are simply opportunities to redefine what you think is possible.

How to Prepare for the Moments That Really Hurt in the Pool. We all experience it at one point or another in training and competition: the moment where our shoulders and legs lock up and we die. Here’s how to be mentally prepared to conquer that moment.

Mental Toughness for Swimmers: You are Far Tougher Than You Think. Want to become mentally tougher? What if I told you that you already are mentally tough?