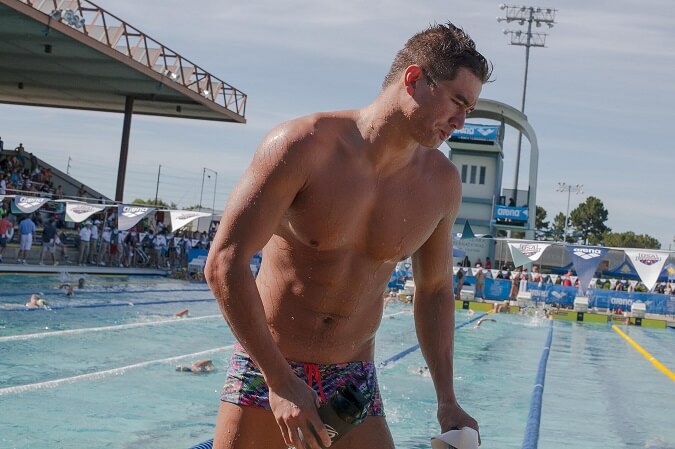 With another round of the Olympics coming our way later this year, many of us in the swimming community are starting to field some thoughts and questions from the non-swimmers in our lives.

What does IM stand for?

Is that Phelps guy going to be there?

How do you keep a straight face when saying “breaststroke”?

After dutifully answering these questions, the non-swimmer acquaintance will shrug, wave dismissively and seek to remind me, “Yeah, but swimming’s not a sport anyway, so who cares, right?”

Well, let’s see about that.

Here is why swimming might not be considered a sport:

You take swimmers out of the water and what do you get? Some lean, wannabe athletes.

It’s not like Michael Phelps can box squat 300+ pounds for 20 reps at a time. Or that Nathan Adrian casually bench presses 160lb dumbbells (two of them). Or that Cullen Jones can box-jump over 50 inches.

Swimmers are weak, unathletic, and that’s that.

The races are super short (so they are super easy).

It’s not like a football game, or a baseball game, or a hockey game. You don’t compete for two hours straight like those athletes do, so how much of a sport can it be?

You hop into a chilly pool, splash your arms around for a minute, maybe two, maaaybe 4 or 5, and then off to the hot tub.

It doesn’t matter that just about every muscle in your body is being utilized in order to propel you through water, which is a measly 800 times denser than air. Or that you have to throw down this kind of effort a dozen times over the course of the weekend. NBD.

How can it be a real sport if there is no punching? No ramming into another human being at full speed wearing a helmet designed by NASA engineers? There isn’t even anyone getting choked out.

On this point alone swimming cannot be legitimately considered a real sport.

Dislocating your finger getting it jammed in the lane-rope? Doesn’t count. Someone jumping on your head during meet warm-up? Nope. Or getting a sweeping breaststroke kick to the eye-socket? That’s sissy stuff!

Like my grandpappy used to say, “If there isn’t at least four concussions by the end of the weekend it’s not a good Thanksgiving weekend.”

What he said, and I am paraphrasing here, was: “What were we talking about again?”

Anybody can do it.

Yeah, anybody can do that! The kicking, arm thrashing and cannon-balling into a pool. Piece of cake!

Never mind the 20+ hours a week, the countless number of hours staring at the black line, the thousands and thousands of flip turns, the early mornings, the late nights, the full weekends

Anybody without a will of iron and a commitment that veers into partial insanity could absolutely do it.

And just like how anybody who can run can out-sprint Usain Bolt, anybody who has had taken a swim lesson can totally beat Michael Phelps!

So in sum: Swimming is absolutely, totally, completely not a sport.

(This article was brought to you by the word “sarcasm.” Please don’t throw your digital kickboards at my head.)