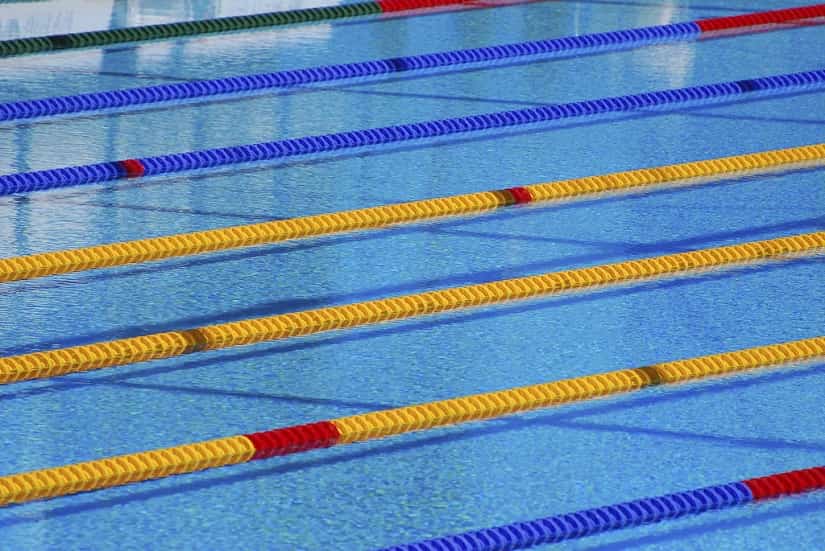 Grit, mental toughness, fortitude—whatever we’re calling it this week, is essential to your swimming success. Here’s why resilience is the difference maker you’ve been looking for in the pool.

Imagine for a moment you are the greatest swimmer in the history of our sport.

At your first big meet since the Games, the sport is being rocked left and right with new world records (43 in total) from swimmers wearing head-to-toe rubber suits.

That you aren’t wearing.

The night before, your rival in the 100m butterfly, who you’d controversially out-touched in Beijing, broke your world record in the semi-final.

Now imagine that while warming up for the final, just an hour before you are going to go race, that you swim head-first into another swimmer in a crash so vicious that it cracked your goggles and left you with blurred vision.

This was the situation that Michael Phelps faced on an August night in Rome in 2009 at the FINA World Championships.

Some swimmers would have buckled.

Instead, Phelps got up on the block, and became the first man to break the :50 second mark in the 100m butterfly, taking gold and reclaiming his world record.

Phelps, despite what was happening around him, was able to rock out and swim at an other-worldly level.

That night in Rome, Phelps showed what it was like to have world-class resilience.

Here’s how you can get yourself some of that sweet, sweet stuff, too.

Resilience: The Ability to Use Tough Moments to Excel

One of the common characteristics of champions is that they are resilient. Like anyone, they’ve experienced significant adversity and challenges on their quest to making the most of their natural talents and genetic gifts, and thrived because of it.

Would Phelps had performed as well as he did had there not been sizable adversity? I’m not so sure—adversity, and the resilience that develops as a result, brings the best out of high-level athletes.

Essentially, adversity has a way of pushing elite-minded athletes to perform better, not worse.

You hear these stories all the time:

These moments of brilliance are born from adversity.

Commonly, swimmers will view adversity or a painful setback as proof that they aren’t deserving. Or it will make them realize that things won’t be nearly as they anticipated, shattering the image of how they thought things would go down.

It sounds simple, even cliché, but it’s true: what doesn’t break you, makes you better.

It’s not that elite swimmers don’t feel the same disappointment and frustration that comes when things fall apart: it’s the way they redirect their anger and focus that makes the difference.

Where one swimmer will use adversity as an explanation for why they will never succeed, another will use it as fuel to work harder than ever.

How to Develop a Mindset of Epic Resilience

The mindset of a swimmer who is mentally tough in trying and challenging situations is part genetic and part process/environment. Some swimmers simply “have it” while others spend their whole careers trying to develop that killer mindset.

Here are a couple ideas.

1. Take moments of adversity as opportunities to develop a competitive edge.

The attitude you bring with you on the pool deck has a way of epitomizing your potential for success.

If you approach that impossible test set or workout with an outlook of—“I bet my competition isn’t doing this set”—you are building yourself a competitive edge that compounds every time you show up for that extra workout, or stay late, or go above and beyond in training.

One of the pillar training beliefs of Michael Phelps and his coach Bob Bowman was a simple commitment to do what no one else was willing to do. This meant training every day for five consecutive years before the Beijing Games. It meant training on holidays, including Christmas and his birthday. The confidence that comes from this kind of “all in” approach is impossible to fake.

In a study of a dozen Olympic champions, one of the common thoughts they had was that moments of intense stress in training provided them with a “psychological and competitive edge.”

The way that they approached the really hard stuff in training was with the mindset that it would make them tougher, faster, and harder to beat.

What will you do that the competition simply won’t? This doesn’t have to be a straight-up contest of who is doing the most meters: think of all the competitive advantages you can accrue outside of total yardage: getting more sleep, eating better, working on your mental training, swimming with more focus, and so on.

It’s when things go south on us where we need to show up with a six-pack of resilience. It’s not enough to read this article, realize how important it is, and declare: “I am now the resilientist!”

You need to practice. You need to take your licks in training and stand back up. You need to approach the setbacks and stressors: both anticipated, a really hard set, as well as the unanticipated: a sudden injury or illness, with the same attitude and asking the same question, “How can I make this the best thing to happen to my swimming?”

Another study of championship athletes looked to figure out the difference between those that graced the top of the podium and those who came up short, the “almosts.” 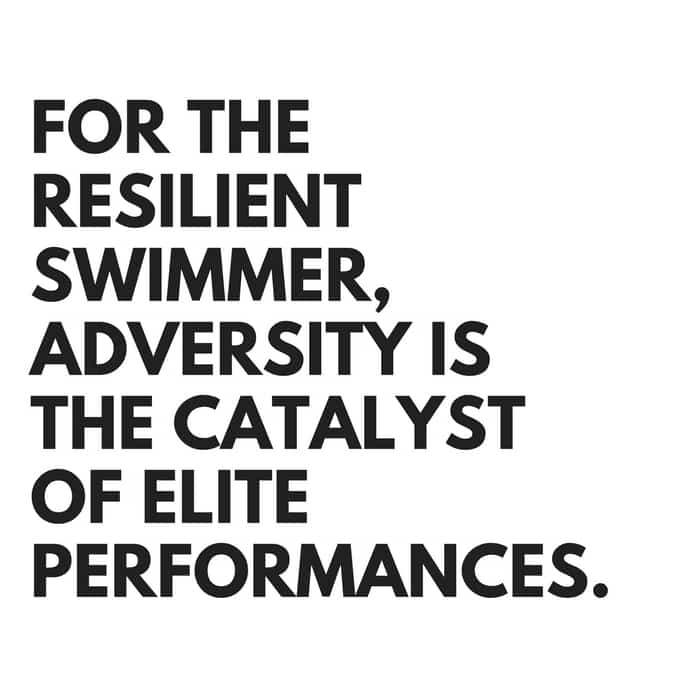 One particular thing that all the champs possessed was a willingness to face and overcome challenges. No matter what was in front of them, they would tackle it with everything they had.

“I always felt that there’s no chance, nobody or anybody that could train more than I did,” said one of the super champions.

What are the moments in training that you’ve been gun-shy about dominating? It could be something as simple as pumping the brakes too early on your effort in a main set, not committing to doing your underwaters, or getting up for early morning practices. No matter what happens to you and your swimming, resolve to approach each challenge with a mindset of: “I will make this the best thing to ever happen to my swimming.”

3. Use small moments of aggravation to strengthen your resiliency muscles.

We always want more resiliency when the big things pop up: when we blow a shoulder, our coach gives us a ridiculous workout, or we are trounced in competition. We want it for the big moments because we know that mental toughness is critical to our success.

But resiliency isn’t something you use once in a while. It’s a skill—something you sharpen each day in training and in life.

Resiliency is necessary for a wide range of events and stressors: from the day to day annoyances (having to share a 25-yard lane with nine other swimmers, getting cut off in traffic) to the life-rattling moments (loss of a loved one, serious injury).

One of the things I always tell athletes when they ask what my favorite “hack” is for mental toughness is simple: How you react to the little things is a preview of how you are going to react when things really turn on you.

Train your resilience with the mini-frustrations you experience in the pool. How do you react to the small annoyances and challenges—you forget a piece of swim equipment, you slap hands with a passing swimmer, you feel like garbage in the water during the opening sets? Use these little moments as resiliency training and building for the really big stressors down the road.

Resiliency is in your thoughts.

Viewing setbacks as opportunities is one thing. And you will benefit so greatly with this approach that frankly, it’s flat-out nasty.

But for elite swimmers, this is one part of the resiliency equation. The other is the ability to understand that resiliency is a decision they ultimately have control over. Not the other swimmers in the pool. Not the coach. Not your parents. Not the turd-muffin who swam head-first into you in the warm-up pool.

How resilient you are is on you. Not the environment.

For example, if you show up to finals, and the swimmer who you’re going head to head with later is swimming like a greased-up tech suit during the warm-up, your thinking could go a familiar route:

“What the Fartlek, he is swimming so fast. I’ve got to compete against that later tonight? This is gonna be impossible…”

Wide-eyed and with your heart in your throat, this could be the moment where the mindset of our example swimmer tanks. A prime set-up for some world-class choking.

The resilient swimmer, acknowledging that the competition—being part of the environment which they have no control over—has nothing to do with them. Instead of focusing on the competition, they focus on their own thoughts:

“Whoa, whoa, let’s relax here. Remember the last meet when I swam so powerfully and smoothly en route to crushing my PB?”

Resiliency comes from your thoughts—not the people around you. It comes from focusing on the things you have control over: this is ultimate power.

You can benefit greatly from your struggles—if you choose to do so.

The Olympic champion, and the victories they amass, always appears cleanly. We don’t see the struggles, the frustrations, the defeats and the injuries. All we see is an epic performance that comes together perfectly at the right time.

As a result, we can mistakenly assume that their path to the pinnacle of the swimming world was straight-forward. But this is never the case.

Behind the smiles, the world records and the medals is a history of overcoming defeats. Of facing painful setbacks. Of countless moments of doubt and grueling sets that bend their confidence to the point of snapping.

But buried in those painful setbacks and moments of frustration are the seeds of what they will often credit for shaping them into champions.

The Olympic champions surveyed acknowledged that if were not for the moments of high stress; the nearly career-ending injury, parental divorce, serious injury and being passed over for other athletes, they would never have achieved the success they eventually did.

The defeat can beat you down.

The injury can leave you feeling like it’s a lost cause.

But you are mentally tougher than you give yourself credit for.

This New Mental Training Book Will Help You Swim Like a Rock Star This Season. Ready to take your swimming to the next level? Learn more about our awesome mental training book that will help you rock out with your socks out, whether it’s in practice or competition.

10 Things That Have Nothing to Do with Talent. Much is made about having lots of talent. But talent alone doesn’t make champion swimmers. And it’s something you also don’t control. Here’s what to focus on instead.