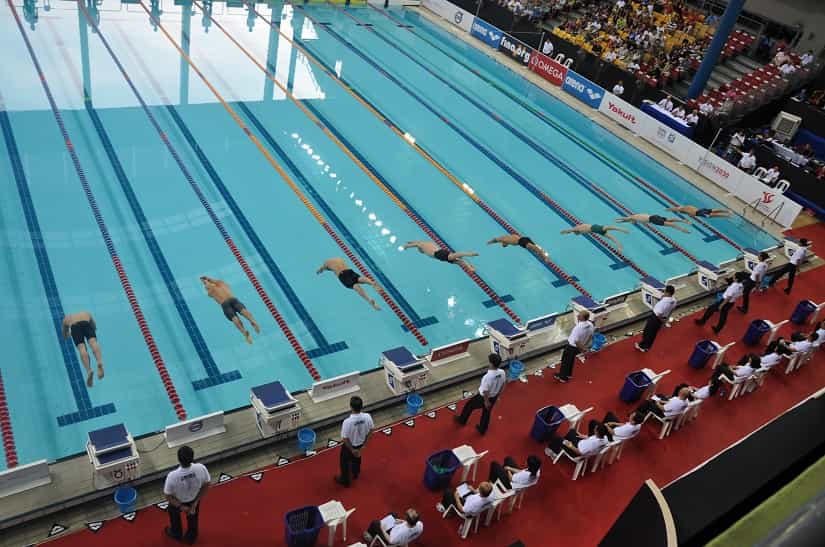 Being an elite-level swimmer means you should be ready to race at any time, even in practice.

Over the course of nearly a decade Russia’s Alexander Popov dominated the 50m and 100m freestyles.

During that span he raced a lot. And I mean a lot.

The guy averaged around 100 races a year. Perhaps more impressively, he could swim insanely fast during training.

Dave Salo, head coach of the USC Trojans and one of the best coaches on the planet reflected on a swim workout he watched Popov swim at the Olympic Training Center in 2000 while preparing for the Sydney Olympics.

In the middle of a grueling session—at altitude, no less—Popov’s coach Gennadi Touretski pulled him out of the water and put him on the blocks to blast a 50m freestyle.

Popov swam a time that was 0.10 under the world record.

(The timing was done on stopwatches, so clearly not official, and even if the stopwatches were off by a few tenths of a second it’s still a stupid-fast time.)

This was not a rare occurrence during the sprint Tsar’s training.

Touretski frequently had Popov (as well as his training mate and 100m freestyle world record holder Michael Klim) get up on the blocks during practice, after practice, as practice was starting, and belt out full blast efforts.

The goal was to be as close to possible as race pace under all sorts of circumstances, which would help the athlete feel confidant in their ability to be able to swim well no matter what the situation.

As Salo says, this kind of ability demonstrates a mindset that differs from the majority of swimmers:

There is a difference between training to make it through practice and training to race. That specificity of training, as well as developing a racing mind-set, makes all the difference in the world.

For most swimmers, they are under the impression that they have to “save up” their great swimming for competition. That they can’t be mentally prepared to swim a really fast race when they are neck deep in training.

See Also: Practice is Everything: The Mindset Behind Superhero Workouts

Now, I am not saying you need to be swimming best times every day in practice, because, well, that’s just kinda crazy. (Although it does happen from time to time…)

But you should be able to bang off close-to-race pace efforts while in training.

After all, swimming fast in practice will help you:

Be better prepared to swim even faster in competition.

It seems obvious, but how many swimmers ever reach that kind of intensity in practice? Consistently training at 60-70% of full intensity and velocity won’t give you the kind of improvement you are looking for. Especially if you are trying to gain blinding-speed.

Tighten the technical elements in your swimming.

One of the key things that happens when you swim your fastest in practice is that the “little” things—your race-speed flip turns, breakouts, and breathing patterns get some much-needed attention and TLC.

After all, the way you do those little things while swimming through a low intensity aerobic set is vastly different from the way you perform them during your events.

The speed you approach the wall is different. The wave you turn your head and try to breathe over is much larger. And the tempo you dolphin kick off the walls with is going to be different as well.

Getting race pace efforts in at practice means you are better prepared for meet-time when those walls and flip-turns come hurtling at you faster than you’ve ever experienced before.

Toughens you up mentally.

Ever met the “Perfect Conditions” racer? They are the swimmer that needs everything to be absolutely perfect in order to feel prepared to swim fast…

The warm-up needs to be done to a tee. They need to execute their stretching routine. They must have had 8 exact hours of sleep the night before.

Any deviation from their perfect conditions and here come the excuses—

Oh, I wasn’t really feeling that race. My technique didn’t feel right. I didn’t have a good warm-up.

Now, I’m not saying that those things aren’t important. They are. But you should be able to swim like a demon even when conditions are far from ideal.

Racing fast in practice proves to you that you can swim fast in a tough environment. It will show you that even after a long week of training, at the end of a 5,000m practice, that you can still bang out some seriously fast swimming.

You won’t need everything to be perfect because you already know that things don’t have to be ideal for you to swim like a chlorinated gangster.

We’ve said it more than a few times around these parts—train the way you want to race, and race the way you train.

Randomly add some full blast efforts over the course of your training so that you don’t need to get ready to be ready.