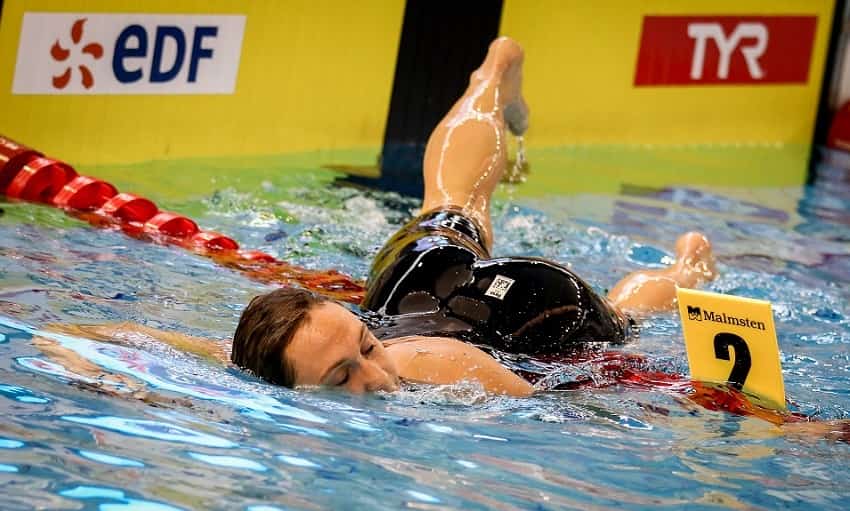 Got an email recently from a collegiate swimmer who is going through something every swimmer experiences at some point over their career:

For the second time this season, I have been dealing with a shoulder injury, and to be honest, it’s been a struggle mentally. I worry that I will be far behind my teammates when I rejoin training, and there is this nagging feeling this is going to become a chronic problem.

You might think it’s personal, but the stats are clear: Given enough time you are going to get injured.

A five-year survey of NCAA swimmers found that they got injured between 3.8 to 4 times per 1,000 hours of training.

When the US Olympic swim team was surveyed on their history of injuries, over 65% of them had missed training due to shoulder pain, and 38% were experiencing shoulder pain when they were surveyed.

So, at least you are in good company!

All jokes aside, while it is frustrating, it’s not all doom and gloom.

Here’s how to keep your head straight when you are injured.

Start by getting properly diagnosed, which includes figuring out the root cause of your injury.

Injuries hurt, but not properly understanding the root cause is aggravating and causes extra anxiety. Not knowing what is wrong is the worst.

Get to the bottom of your injury, and not just obsess over dealing with the symptoms. There’s a difference between, “I’m gonna take an Advil because I have a headache” and asking, “Why do I have the headache in the first place?”

When I was 16 and 17 years of age I was experiencing streaks of workout-ending shoulder pain. After seeing a couple physios, I was eventually referred to the top sports therapist in the area. He had been on the staff for a couple Olympics squads and worked with the national team.

I was pumped: “If anyone is gonna know, it’s this guy!”

My arm and shoulder got pulled, twisted and yanked. I winced a whole bunch on the treatment table, and he threw a bunch of sciencey-sounding words at me.

Gave me the usual banded internal/external exercises and tried to send me on my way.

When I pressed him on the root cause of the shoulder pain, he offered nothing but an increased dosage of ice.

I left with the hopes of my swimming career in the bottom of my shoes.

The sense I got was that this was something I would have to deal with permanently if I wanted to keep swimming. I knew there was something broken somewhere, but it wasn’t obvious to me what it was.

It wasn’t until the next fall, when after yet another bout of agonizing shoulder pain, I was sent to my university’s sports therapy clinic. I shuffled in and was told to sit on a waist-high bench.

A grad student walked in, took one look at me and said, “Well, your posture is awful.”

Wait… bad posture can cause shoulder problems? The grad student stared at me, slowly smiled. Yup, she said.

Walking out of the clinic that day I was bubbling with confidence and motivation.

I felt in control of the injury, at long last.

Sweet chlorinated relief. This was the difference in treating the symptoms versus treating the overlying cause.

Be ruthless about getting to the root of the problem. Otherwise, like it was in my case, you are going to spend two years banging your head against the wall.

Ownership of this process combined with a proper diagnosis will give you a sense of confidence and calm.

A sense of bouncing forward, and more importantly, it will provide you with some new goals for treatment and prevention of recurring injury.

Worrying about being behind your teammates.

Okay, so while you are piecing together the backstory on your injury (or maybe you already have—in that case, giddyup!), there is that very real worry that you are losing out on making progress in the water.

That every moment, every lap, every swim practice you miss are opportunities lost forever.

Worse, you might even think that the time missed is making you a slower swimmer. You fear that your technique and conditioning are literally withering away before your eyes while your teammates crank out laps at a faster and faster clip.

The good news is that this fear is normal.

We all get it.

The good-er news is detraining happens at a far slower rate than you might think.

One of my favorite examples is the story of Aussie sprinting ace James Magnussen.

A few weeks out of the 2011 World Championships, Magnussen’s preparation is going smoothly—until he catches pneumonia. Not a case of the sneezes, or a head cold, but full-blown, bed-ridden pneumonia.

For nine days he is out of the water. He heals in time to travel with the team to Shanghai for the meet, where he wins the 100m freestyle world title in a personal best time of 47.63.

At that point, this is also the fastest anyone has ever swum the 100-meter freestyle in a textile suit.

During that time, Dressel didn’t swim a single lap. Not one. When he did get back into the pool the beginning of his freshman year at university, seven months later he was winning titles at NCAA championships.

The most extreme example I can think of is Anthony Ervin.

Ervin took a decade off from the sport, and within two years of his comeback was swimming fast enough to place fifth at the London Olympics in a time that was faster than his gold medal winning performance at the Sydney Olympics twelve years earlier.

Being away from the pool for a short or even long duration won’t make or break your swimming career.

You aren’t going to suddenly un-remember the skills you’ve developed.

(That said, this isn’t a get out of jail free card to eat like a donkey while out of the water: “Oh yeah, how about if I take two weeks off eating nothing but extra cheese pizzas and six-packs of Dr. Pepper?”)

Especially when you consider that this fear leads many athletes into abandoning their rehab program altogether. The thinking goes: I’ll never be as good as I was, so what’s the point?

Your rehab plan gives you things to focus on. Even though you can’t train at 100%, there are still things you can do.

Can’t train at all? Clean up your diet. Fix your sleeping habits. Spend more time exercising your gratitude muscle.

Just because you can’t get better at one aspect of your swimming doesn’t mean you cannot improve elsewhere.

Is being injured going to be the new normal?

Third, there is the very realistic worry that the injury is going to be chronic, something you will have to deal with repeatedly over the rest over your swim career.

Ideally, you’ve sat down with a specialist and had your injury properly diagnosed.

Out of this should come a pre-hab plan for the future; the exercises you do regularly to “injury-proof” whatever it was that got hurt in the first place.

Now, a lot of swimmers will get diagnosed, be given a plan to injury-proof themselves, and will promptly throw it away the moment they feel like they are 100%. After all, pre-hab or rehab protocols are often seen as boring, tedious, and once healthy, a waste of time.

I’ve seen it happen a hundred times, and I’m not too proud to admit that I’ve been guilty of this as well.

Clearly there was something, somewhere in your preparation that led to the injury. It’s your job to fully address it.

(Which is good news: This is something you have control over.)

Schedule your pre-hab so that you don’t miss it or skip it, especially once you’ve recovered. Put it right at the top of your priority list like plugging in your smartphone overnight or eating dinner.

Take the plan and stick to it, especially when you think that you don’t need it anymore.

When the curse is a blessing.

Like any other kind of setback, the injury or illness you are suffering is showing that there is something, somewhere in your training or lifestyle that needs fixin’.

Constantly falling ill? There’s something lacking in your diet and lifestyle. Maybe you aren’t managing the daily stress of your life and are more prone to falling ill. Perhaps you aren’t getting enough sleep at night and are getting sick more often as a result.

There is something in your diet that isn’t agreeing with you, and instead of paying attention to it, you are performing at a sub-maximal level.

Fixing this thing—whatever it is—will make you a healthier person overall. 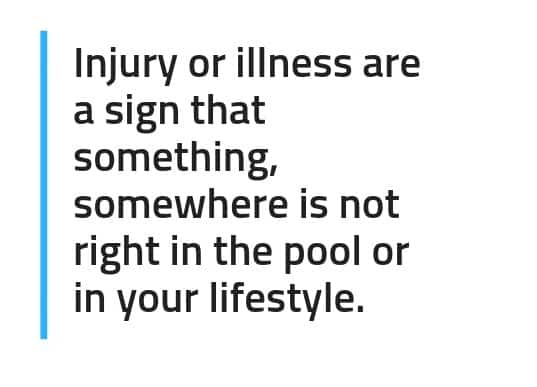 Fixing the underlying issue won’t just stop you from getting hurt again, but having better muscle balance, better posture and better technique will make you a far faster swimmer over the long run.

While some freak injuries (slipping and falling on ice, for instance) are a one-off occurrence, the injury or illness you are experiencing is a symptom that something is broken somewhere.

Fixing it won’t just bring you back to where you were but will push you forward much faster than if you were to ignore it.

The biggest downside to injury isn’t usually the injury itself.

It’s the frustration and catastrophizing that comes along with it.

These things often lead swimmers to the worst thing that can happen when you are injured—withdrawal.

Withdrawing from the team. From doing your rehab protocol. From doing the things you can do while you can’t go to practice. From staying focused on the goals of the rehab process and focusing on the worst-case scenarios.

While you may not be able to do everything you usually could do, you can do something, and ultimately, that’s better than nothing.

How to Finally Fix and Prevent Swimmer’s Shoulder. Fed up with being sidelined by swimmer’s shoulder? Here’s your ultimate guide to fixing and preventing shoulder injuries from swimming.