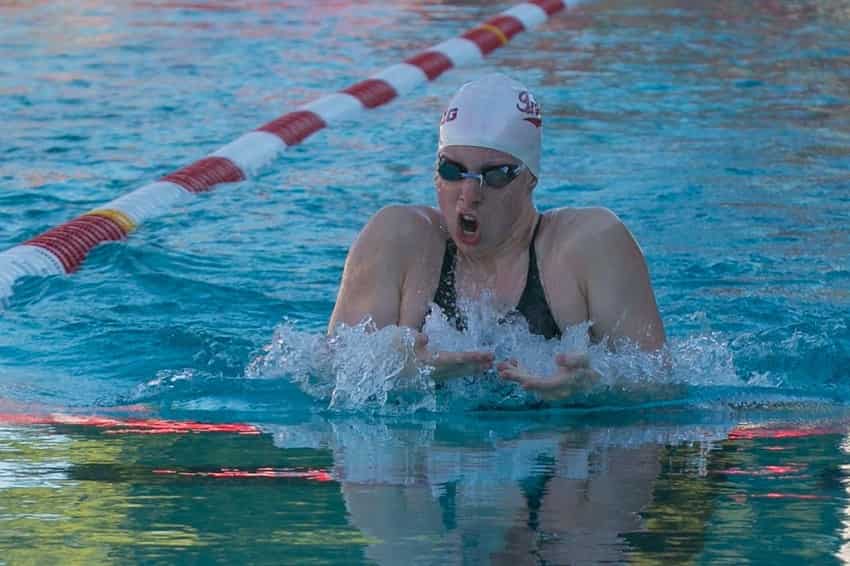 Learn how to push through lactate and use it as fuel with this burner of a swim practice from the sprint group at Indiana University.

There’s a lot of hype and misconceptions around lactate and how it impacts performance in the water.

This post isn’t going to get into the science of lactate, but instead, detail a set that the Indiana Hoosiers University and pro swimmers did in 2019 under the legendary Jonty Skinner.

The goal of the workout?

To teach your body to learn how to swim through a heavy dose of lactate.

That same delightful feeling on the final 25 of your races when your legs feel like cement and you struggle to maintain technique, speed, and dignity!

“The pain is gonna be real,” says Cody Miller, Olympic gold medalist who featured the swim practice in one of his recent vlogs.

As a swimmer, Skinner was no slouch in the water—he smashed the world record in the 100m freestyle in 1976, swimming a time that was almost half a second faster than the gold medal-winning time at the Montreal Olympics a month earlier.

Skinner turned to coaching following his swim career, with stints at the University of Alabama Indiana University, and six years as USA Swimming’s resident team coach.

With this practice, Skinner’s goal for his swimmers was simple: Sprint until your body is depleted of phosphate so that your body will learn to use lactate as fuel.

The lactate will build in your body over the course of the set, and without the benefit of any active recovery between efforts, the lactate will continue to build and build, with your body (hopefully) learning to swim through it.

One ticket to Ouchie-town, please!

The main set was written up by Skinner, with Indiana assistant coach Cory Chitwood providing the warm-up, pre-set, and the facilitation set following the lactate ouchie-ouchie main set.

The way the set is constructed is as follows:

There is no warm down or activity to be done between reps and rounds.

The 25s will chip away at your phosphate levels—one study with 400m runners, whose races last around the same time as a 100m freestyle—found phosphate was down 25% by 100m, and then 90% depleted by 400m.

The 100s are an exercise in focusing on pushing through the fatigue and pain. 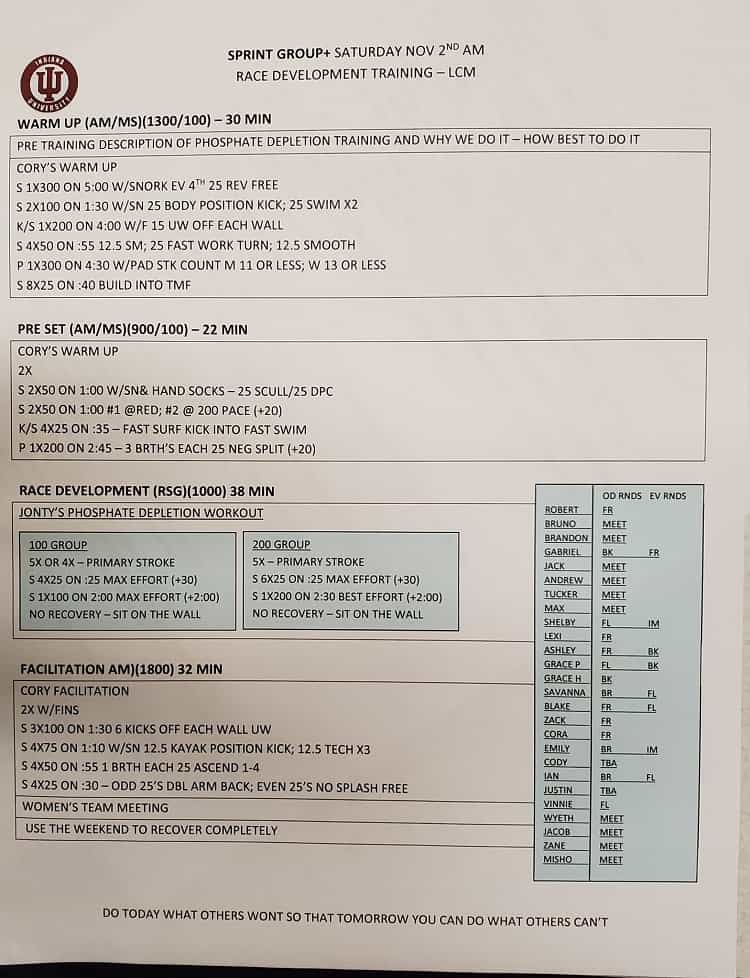 Here is how a few of Indiana’s star swimmers performed on the 100s, which were in yards and were suited:

Here’s Cody’s vlog on the workout:

I had a chance to try the set myself a few weeks after Cody posted the vlog, and I can confirm the set hurts!

By the end of the workout, I could basically taste the lactate in my mouth.

Capitalize on your gains by properly warming down

The active recovery portion of the workout—which Indiana prefers to call “Facilitation”—is almost as long as the main set itself.

1,800 meters and over half an hour in duration. This isn’t an accident.

Studies with athletes have found that active recovery following super high intensity exercise helps teach your body to get better at removing lactate.

In other words, warming down properly after those brutal main sets will help you recover faster over the long term. As the authors note, the post-set active recovery is “possibly just as important as the prescription of the training itself.”

A big thank you to Jonty Skinner for posting the workout and results, as well as Cody for the behind-the-scenes look at the set.

This is How Fast Sarah Sjostrom Swim in Practice. You don’t become the fastest 100m butterflyer in history without doing some super fast swimming in practice. Here is a look at some of Sarah Sjostrom’s practices and training.

Train Your Ability to Sustain High-End Speed with this Set from Olympic Coach David Marsh. This set for sprinters is one of the workouts David Marsh used while at Auburn to turn them into a sprinting powerhouse.