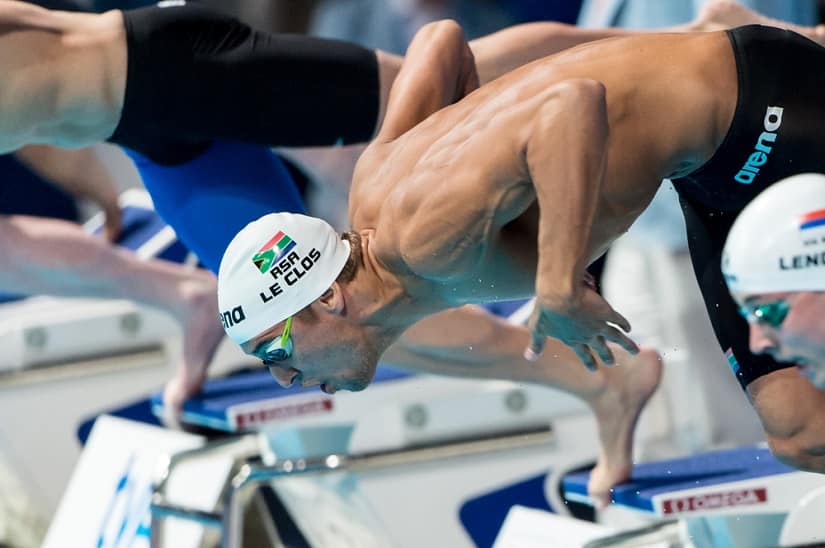 The block. The start. The dive.

It’s the first thing we do in competition, and yet, it’s often the thing we spend the least amount of time on in swim practice.

For many swimmers, it’s an after-thought.

Swimmers like Caeleb Dressel, who could make a good case for having the best start in the world right now, understand the value of refining and improving their swim start.

A faster, more explosive start can throw you out to an early lead, demoralize the competition, and of course, power you to faster times.

How to Get More Distance Off the Blocks

Having a fast start is more than just being able to react quickly to the starter’s gun.

As Dressel showed at the 2017 FINA World Championships, having the fastest reaction time isn’t necessary to dominating the competition—it’s the height, distance, velocity and angle of entry that affect how much speed you carry into the water and through the breakout.

Vertical jump training—squat jumps, box jumps, and so on—are pillars of the dryland programs for most swimmers. And with good reason: improving your vertical gives you a greater ability to improve start performance (and this has been reflected in a couple different studies, here and here).

But vertical jump training ignores one important aspect that is critical to improving the swim start: we need to be able to achieve horizontal velocity too.

Researchers [1] took a group of 10 competitive swimmers and had them undergo a 9-week plyometric program that focused on long jumping. During the twoish months that followed, our test group didn’t do any supplemental start training, either.

The training was straight-forward: For the first couple weeks the swimmers did 8×2 horizontal long jumps twice a week. For the remainder of the program, they did 15×2, with a rest period of two minutes between each set. The long jumps were performed off a platform that was constructed at the same angle of a starting block.

This is a crazy amount of improvement in power and speed, especially when you consider the relatively small amount of training time involved in making these gains happen.

Because of the specificity of the movement—the long jump more closely replicates a swim start than a straight vertical jump—the researchers surmise that this type of training is far more effective than the more traditional performed vertical jump training.

Faster starts, with a minimal amount of time? Giddyup.

Runners: A Simple Drill for Better Swim Starts. Races are won and lost off the start. Here is a simple drill you can use to work on bodyline and hitting the water with max speed.

Bill Pilczuk on How to Develop an Explosive Start. American Bill Pilczuk stunned the world, and the greatest sprint freestyler in history, Alexander Popov, on his way to winning the 1998 World Championships in the 50m freestyle with a start that leveled the entire field. Here is his favorite advice for swimmers wanting to improve their start.