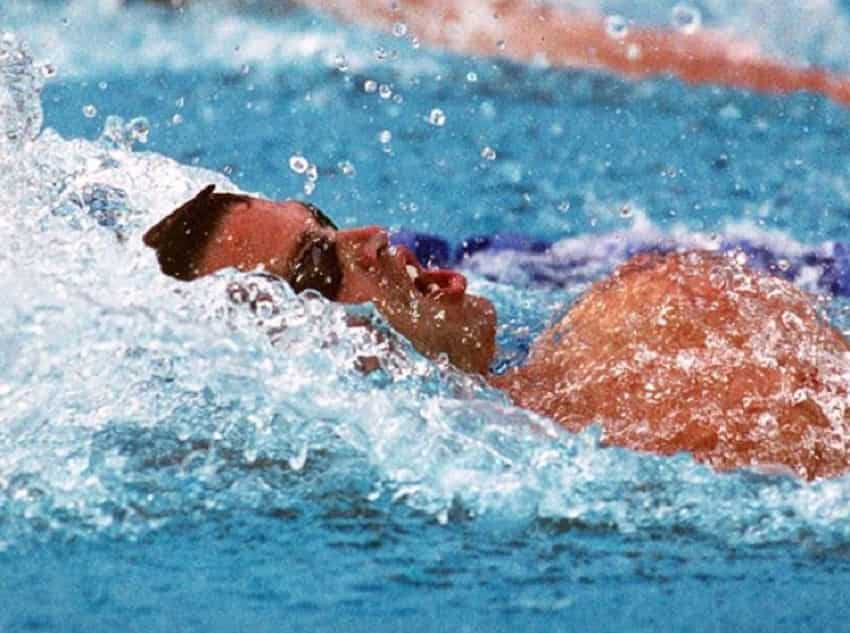 When Mark Tewksbury lunged backwards into the touch pad at the 1991 FINA world championships and looked up at the scoreboard, he felt a sharp blast of satisfaction.

Even though Tewksbury had placed second in a time of 55.29, he was just 0.06 behind the winner, Jeff Rouse of the United States. The silver medal was a validation that the training was working, the commitment was paying off, and that he was inching closer and closer to his ultimate goal of being the fastest 100m backstroker in the world.

Olympic gold two years later in Barcelona was so close he could taste it.

The trajectory had been in the works for a while. At the Seoul Olympics two years earlier, Tewksbury had placed fifth in the 100 backstroke and collected a bronze medal in the medley relay with the late Victor Davis.

At the Pan Pacific Championships, held in Edmonton in the summer of 1991, Tewksbury and Rouse again met in the final for the 100m backstroke. Given that Tewksbury was still working hard in practice, and that he’d been so close the last time they’d raced, Tewksbury figured he had a serious shot of unseating the world-leading Rouse.

Tewksbury was never in the race, with Rouse using his superior start and underwater dolphin kick to drop a blistering 53.93, wrecking the world record by over half a second.

This time, when Tewksbury looked at the scoreboard and saw second place there wasn’t joy or satisfaction. There was the sickening feeling of his world having been shaken, turned upside down and thrown across the room. Rouse’s time surpassed what Tewksbury thought was humanly possible in the event.

“In my wildest dreams I thought it might be possible for me to swim a time of 54.50,” Tewksbury recalled in his auto-biography, Visions of Excellence (Amazon). “That was an outrageous, wild dream that I kept in my head.”

Tewksbury would have to drop 1.2 seconds to be competitive with the time Rouse swam. This was the same amount of time Tewksbury had dropped in the previous seven years, and now he had only one year to match that improvement.

He left the pool that day winded, his dream of Olympic gold evaporating into the chlorinated air.

Visualize the Success You Want to Experience

The year of the Barcelona Olympics started on a better note.

In February, Tewksbury and his teammates from the University of Calgary set the world record for the 4x100m medley relay in short course meters, with Tewksbury leading off in a blistering world best of 52.50.

(Side note: Watching this race from the pool deck was one of the highlights of my age group swimming days. I get chills just thinking about how electrified the building was that night.)

The next month Tewksbury traveled to Barcelona to see the pool where the swimming events were going to be held. He had been using visualization regularly to picture that perfect gold-medal winning performance, but in his mind every time he swam his goal race he came fifth, like he had in Seoul.

To “rewrite” the visualizations he traveled to the still unfinished Piscines Bernat Picornell. Construction workers milled about the site, but Tewksbury could see the finished pool in his mind.

I tried to imagine where the sun would be in the evening for the final and made a mental note. The picture in my mind was becoming a little clearer.

I stood up in the stands looking at the pool for a long time. Eventually I went down and stood on the deck. I walked from where I thought the ready room would be out to lane four and I waved to the imaginary crowd.

I then walked back to the ready room and went through the same procedure to lane five.

Tewksbury soaked it all up, remembering the random features of the pool so that he could enrich his daily visualizations.

I pictured winning in this pool. I imagined the feeling I would have when I looked up at the scoreboard and my name had the number one beside it. It was so exhilarating I had goosebumps just thinking about it.

The trip went a long way in boosting Tewksbury’s confidence that he could bring his absolute best performance later that summer.

Six One Hundredths in Barcelona

On July 30, 1992, the finalists of the 100m backstroke were paraded out at the Barcelona Olympics. The sky was overcast—great for backstrokin’ as this meant the sun wouldn’t be in their eyes.

Tewksbury felt calm and relaxed. An hour earlier he had been in the midst of his final preparations. “I visualized the race over and over again, always winning,” he said.

When the starter’s gun finally went off Rouse took off to a quick half body length lead, dolphin kicking nearly all the way to 15m. By the 50m mark, Tewksbury had largely caught up, only to get soundly beaten on the second underwater.

The gap was half a body length.

Yet again, an unrelenting Tewksbury had to charge back, slowly coming back on Rouse. With 10m remaining Rouse was still clutching the lead, but it was shrinking with every stroke. With five meters to go Tewksbury pulled even. Stroke for stroke they went under the flags, and with a final hurl of the arm both swimmers hit the wall.

The scoreboard lagged for an endless second before it spat out the results.

Tewksbury erupted, pushing off the wall, throwing his fist into the sky, sitting on the lane rope, hands clasped on his hand, struggling with the realization that he’d achieved his ultimate goal.

Ironic—he’d won in a time of 53.98, an Olympic record, out-touching Rouse by the exact same margin that Rouse had beaten him with two years earlier.

Just six one hundredths of a second. 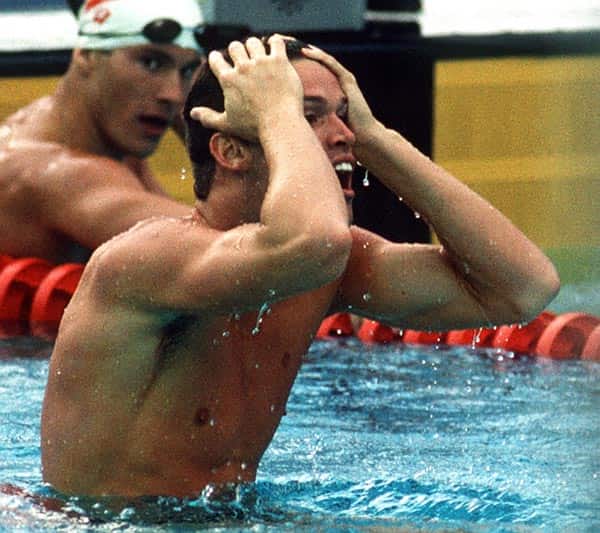 Great swimmers see the swim they want before they swim it

While Tewksbury’s exuberance may have suggested he was surprised by the result, he’d rehearsed that exact race so many times in his mind that the physical performance was just another rep.

Elite-minded swimmers experience the race they want—the smell of the chlorine, the coldness of the pool, the pain of that third 25—long before the starter’s gun, so that when it’s race time all they have to do is clear their mind and let their body take the wheel.

Effective visualization works because our brains have difficulty telling the difference between real and imagined events.

Here are some quick ways you can incorporate this mental skill for better swim practices and races:

Use visualization to picture yourself conquering adversity.

Do you go to competitions expecting that everything will go perfectly from beginning to end? Come on, it’s okay to admit it if you do—we all do to some extent. When we expect things to go perfectly it leaves us unprepared for the moment that things do not go our way—when the inevitable adversity hits us it rocks us.

Visualize your meet warm-up not going perfectly, or your competition blowing out to an early lead—and then imagine yourself handling the adversity with poise. It will lay the groundwork for smarter reactions when adversity does happen (and it will).

Use it in practice to boost performance.

Visualization is a more powerful performance tool than your old-school psych-up talk. When track athletes were instructed to visualize their ideal performance or lean on motivational self-talk, the visualization group ran significantly faster. Before you push off for that big set or all-out rep, take a handful of seconds to visualize yourself swimming the way you want to swim.

Use physical cues to anchor your visualizations.

When Tewksbury visited the Barcelona pool he was doing exactly this: giving his visualization a deeper level of detail, which made it more real.

You don’t need to fly halfway across the world in preparation for your next meet, but you can add things like: the smell of chlorine, the cold pool deck below your feet, the texture of the starting block, and the initial shock of cold water rushing past your body.

The richer and more detail-oriented the visualization, the deeper it will anchor.

Treat it as another part of your training.

Most of the time when I talk to athletes about using visualization it’s because they are scrambling to do something, anything, in a last ditch effort to prepare for an upcoming competition. The power of visualization shows when you make it part of your regular training. Each night set yourself a goal of doing 5 reps of your goal race.

Just like lifting in the gym, or swimming laps in the pool, developing effective mental skills is a game of putting in the reps.