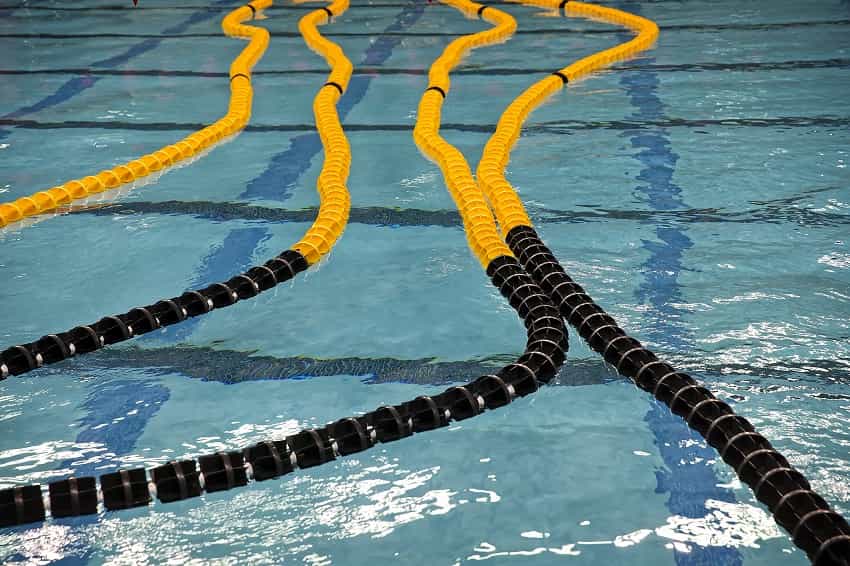 Competitive swimming has its own language. For the newcomer, it can feel overwhelming trying to crack the code.

Below is a breakdown of the most common swimming lingo you can expect to hear at swim meets, at swim practice, and on the pool deck.

Swim meets can be long, soggy affairs. It can also be a little baffling for the new swim parent and newbie swimmer. Heat sheets? Marshalling area? Final results? Henh?

Here is a glossary of swim meet terms that you are likely to hear on the pool deck and in the stands at your local swim meet. 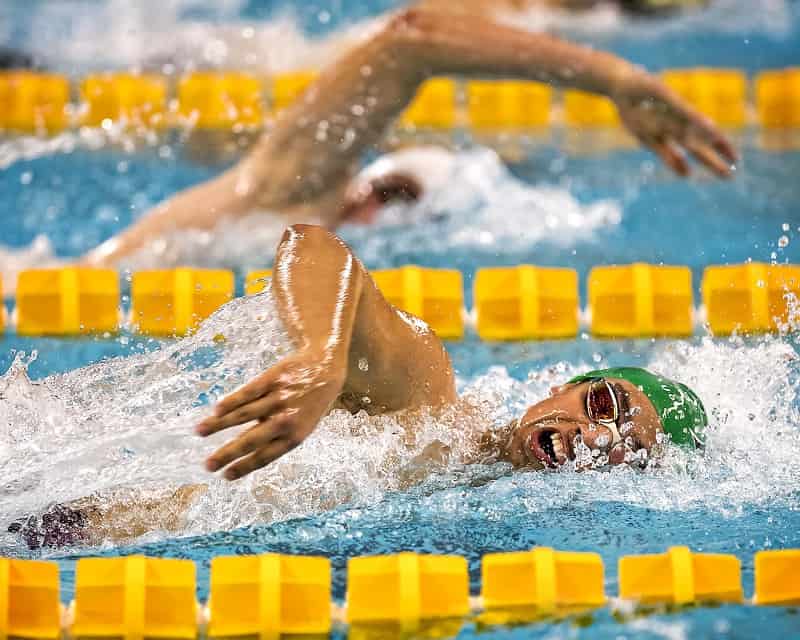 In-season meet: In-season meets are important for a few different reasons. They are a form of training, giving swimmers a break from regular practices, giving them a chance to “practice” racing, and encouraging them to compete when they aren’t fully rested.

Dual meet: A competition that is set-up between two swim clubs. Both teams compete for points. Most prevalent in high school and collegiate swimming.

Age groups: Swimmers are organized by age in competition. 8 and under swimmers compete against each other. Same goes for 9-10 year olds, 11-12 years olds, 13-14 year olds, and 15-18 year olds. “Senior” is often 17/18 and over. (Age groups vary by swimming organization, but these are the most common.)

Seed time (or entry time): The time that a swimmer is entered into an event with. This time, usually the swimmer’s personal best time in the event, is used to seed the swimmers into heats. For example, if a swimmer has a best time of :30 in the 50-yard butterfly, they will be entered with this time, and meet organizers will seed the swimmer alongside other swimmers in the same age group with a similar time.

Proof of time: Some meets require proof that an entry time has been legally completed.

Heat: One flight of swimmers doing an event. For example, in an 8-lane pool, it would be eight swimmers doing the same race. An event of race can have a few or many heats. Slower swimmers race in the first heats, with the swimmers with the fastest seed or entry times swimming in the final heats.

Heat sheet/Psych sheet: A list of the day’s events, usually paper-bound, that lists the participants in each lane, their seed time, lane, and the heat they are in. Races are arranged by event number. Swimmers can be “circle seeded” or seeded slowest to fastest.

Alternates: When a swimmer places 9th or 10th, placing just outside of the top 8 competitors who advance to the final, they are designated as alternates in the event that one of the finalists decide to scratch their race.

Anchor: The fourth and final swimmer on a relay team. A position of prestige, often reserved for the fastest swimmer on the relay, as they are competing for a better finishing position and a fair chunk of glory.

Prelims: The morning or preliminary session of a swim meet. This is where the finalists and consolation finalists are decided for the evening or “finals” session.

Finals: Held at night, they are the championship heats of the events that were held in the morning. Some meets will have a final and consolation heat.

Championship Final: The fastest top eight swimmers from the morning or preliminary session. These swimmers are competing for medals and points.

Consolation Final: Usually, these are the 9th to 16th fastest swimmers from the morning or preliminary sessions. Even if a swimmers from this heat posts a time faster than the winner of the championship final, the best they can do is place ninth overall.

Ready room: Ready rooms are used mostly at more senior meets. Swimmers “check-in” here around 20 to 30 minutes before their race.

Marshalling area: The area on the pool deck where swimmers are “marshaled” prior to the race. Sometimes, rows of chairs will be set-up, with swimmers being assigned to a particular row along with the other swimmers in their heat. This is more typical of swim meets with younger swimmers.

Final results: After a race has been completed, and there have been no disqualifications, results are said to be “final.”

Bell lap: When a swimmer has two lengths of the pool remaining, an official will ring a bell at the end of their lane. Used for longer races, 500-yard freestyle and up.

False start: When a swimmer leaves the blocks early. A false start can include a swimmer trying to jump the start or rolling forward before the starter’s pistol has sounded.

False start rope (recall rope): A rope that is dangled at the 15m mark to stop swimmers in the event of a false start. Not fun to swim into, for the record.

DQ (disqualification): Not to be confused with the ice cream/fast food chain, DQ’s happen when a swimmer has violated one of the rules. Touching with one hand during breaststroke, or dolphin kicking past 15m, false starting, etc.

Qualifying Times (Cuts): Time standards for competitions. For example, a AAA cut of :58.44 for the 100m freestyle would be the minimum requirement to attend a AAA meet. Most junior meets and all senior meets have qualifying times (cuts).

Timer: A volunteer, usually a swim parent, who times the swimmer in their assigned lane with a stopwatch. Usually there are 2-3 timers per lane.

Starting block: The mounted platform a swimmer uses to dive into the water. When a coach says to “get behind the blocks,” this means the swimmer should get behind their respective starting block in anticipation of their heat.

Touchpad. The yellow electronic pad that is affixed underneath the starting block. The clock stops when a swimmer touches it at the end of their race. Although there are 2-3 timers behind the block, this is usually the official time.

For the new swimmer, looking at the white-board of a swim practice makes no sense. Just a whole bunch of numbers and short-hand. Here is a breakdown of the more common swim practice terminology. 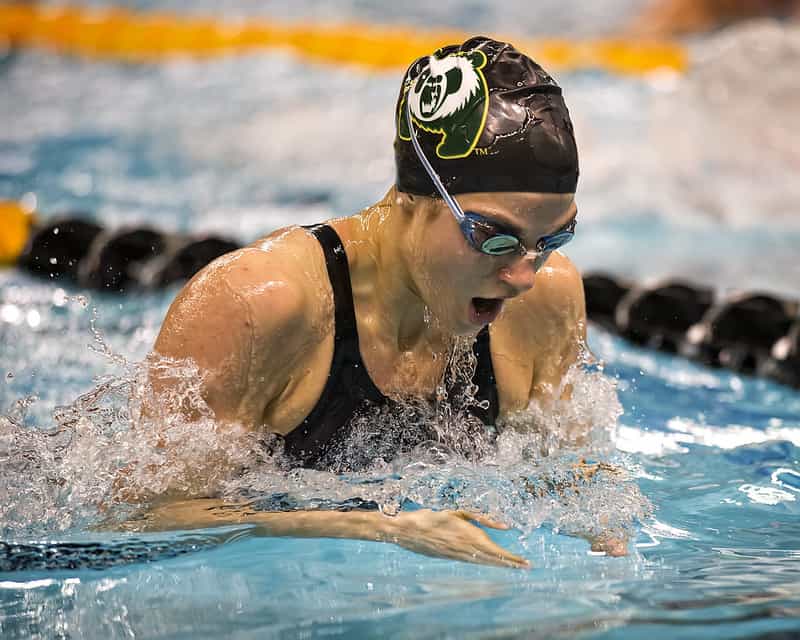 First, let’s start by taking a look at how a typical set is written up:

Intervals: The time that a designated rep is supposed to be completed within. For example, if a swimmer is doing 10x50m on a 1:00 interval, for the ten repetitions they would push off the wall for the next rep after :60 has expired.

On the red top! Most pace clocks are the old-school analog type that has four hands. Many swim coaches designate the red hand as the one to use. “On the top” means at the top of the minute—in this case, at :60/0:00. Variations include “On the bottom!” and from the coach who enjoys confusing the chlorine out of his swimmers, “On the blue fifteen!”

Tapering: A period of up to three weeks before a swim-meet where a swimmer’s training is steadily decreasing. This is a fine-tuning period for swimmers as they prepare for competition. How much a swimmer tapers depends on age, muscle mass, events, and whether they are doing a full taper or just resting a little bit (common for mid-season and non-championship meets).

DPS: Distance per stroke. How far you are able to go with each stroke or stroke cycle. One of my favorite all-time freestyle drills is Mini-Maxi, where you try to take the minimum number of strokes at the fastest possible speed (add both to get the lowest score you can).

Stroke count: The number of strokes you take per lap or length. This is a common measurement of efficiency in the water.

Drill: Variations of regular swimming that are designed to over-emphasize a particular element of the stroke. For example, butterfly arms with flutter kick drill is designed to help swimmers improve the aggressiveness of the arm recovery.

Kick: Using only your legs for propulsion. This can include using a kick-board, kicking in a streamline with a snorkel, doing vertical kicking, and many other variations.

Pull: Using only your arms for propulsion by putting a pull buoy between your legs to keep your legs from kicking. Swimmers will often use paddles while doing pull for power work.

Best stroke: When the coach gives swimmers the option to do a set or rep with their best stroke or specialty.

Dryland: This is a catch-all term for training that is done outside of the water. Stretching, yoga, weight training, dodgeball—if it’s “dry” training, it’s referred to as dryland.

Get-out swim: When a swimmer is given the opportunity to get up and swim an event at practice, and if done under a mutually agreed time, the whole squad gets out of completing the rest of the practice. (“If Bobby goes under a minute for 100-breaststroke, practice is over!”)

40 Ultimate Workouts for Competitive Swimmers. Here are 40 swimming workouts for sprinters, distance swimmers, butterfliers, IM’ers, and everyone in between courtesy of some of the top programs, swimmers and coaches in the world.

How to Be an Awesome Swim Parent. The swim parent is a soggy and thankless job. Here are some ideas and suggestions for making the most of your time involved in this amazing sport.