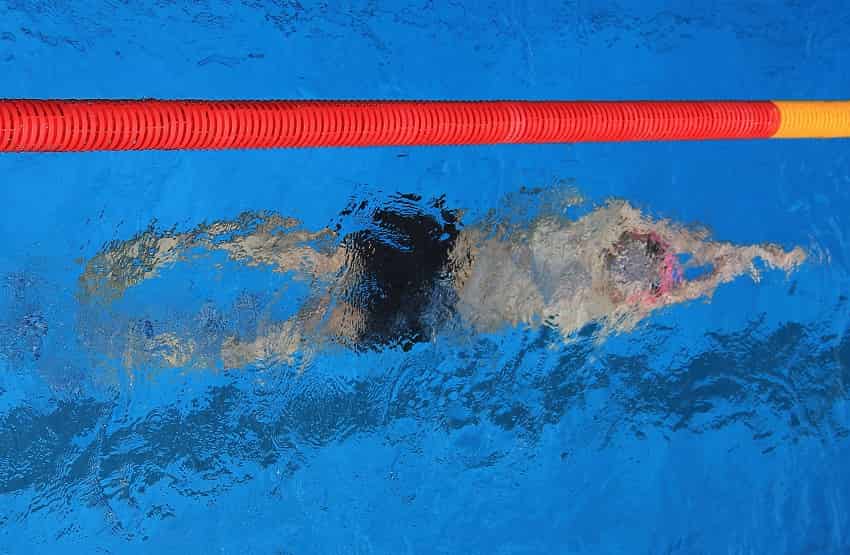 Give your underwater dolphin kick a swift kick to the speed with this simple and proven training set.

The underwater dolphin kick, aka the fifth stroke, is one of the essential tools for competitive swimmers.

Being a chlorinated gangster with your underwater dolphin kick means you are **potentially** going faster than you can on the surface of the water.

Excellent underwaters and breakouts also help you to maintain some of the peak speed you generate off the start and push-offs.

And frankly, a fast underwater dolphin kick is simply a lot of fun!

While we all crave and want that silent-but-deadly speed, there are often a lot of questions when it comes to the best ways to improve the dolphin kick.

Fortunately, some research with experienced competitive swimmers yields a simple protocol that swimmers and coaches can use to level up their dolphin kicking game.

Each swimmer kicked out to 15m underwater as fast as they could twice, establishing a baseline for later testing.

Over the next four months, the swimmers, 32 collegiate swimmers, all of whom had swum at the national level, added the following set to their training:

This little add-on set was done just two to four times per week over the stretch of four months.

When they were tested again, the researchers found some significant improvements in a couple of key areas: 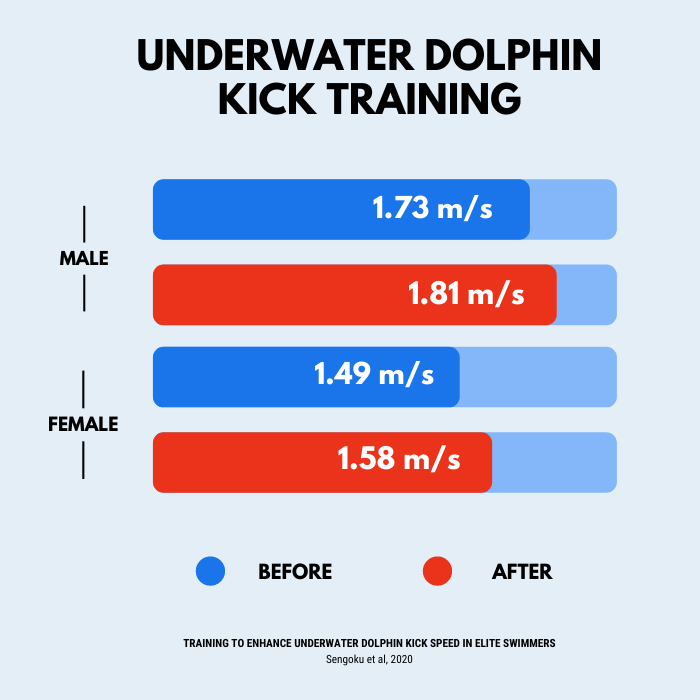 Taking the next step with your dolphin kicking

I think the most significant part of these findings is that the intervention was performed on a group of highly developed swimmers. They were already national-level, elite swimmers, who have a smaller range of improvement compared to age group swimmers.

A 200m kick and a few minutes leashed up to a resistance tube, done two to four times per week.

This goes to show that your dolphin kick is something that can be improved at any age and can be done with a small amount of deliberate and targeted training.

I’ve written about it more than a few times on this blog. Here are a couple of other guides and articles that you can arm yourself with for mastering the fifth stroke.

How to Develop an Awesome Underwater Dolphin Kick. In this comprehensive guide to improving the dolphin kick, Olympic gold medalists, biomechanists, and even a space scientist stop by to share their favorite tips for awesome dolphin kicking.

Fish Kicks: How to Develop a More Balanced Underwater Fly Kick. Most swimmers completely neglect the up-kick phase of their dolphin kick. Here is a set and drill to help you develop a fuller and more balanced dolphin kick.

5 Dryland Exercises for Faster Underwater Dolphin Kicking. For the swimmer who is without water, or who wants to upgrade their strength and power in the water, here is a collection of the best exercises for stronger and faster underwater dolphin kicking.

How Far Underwater Should You Be Kicking? While the speed of dolphin kicking is legit, there is a point of diminishing returns.

The Boring “Secret” to Improving Your Dolphin Kick. Champion kickers are made in practice, and this starts by adding just one dolphin kick to each of your walls.