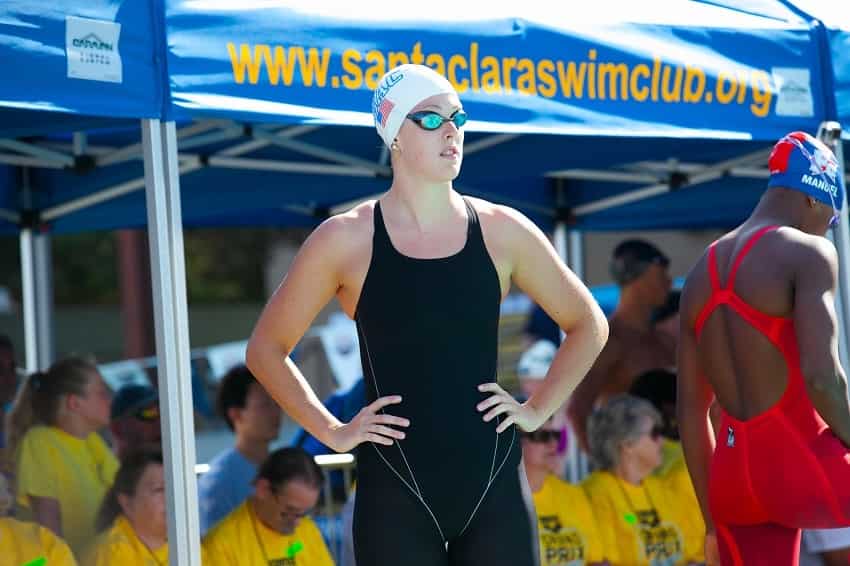 In November of 2016 one of the more powerful swimming organizations within USA Swimming—Southern California Swimming—released a policy where young age group swimmers would not be allowed to compete in SoCal Swimming sanctioned competitions while wearing a tech suit.

The policy was directed towards swimmers between the ages of 5-10 years old, who would not be permitted to wear the more expensive tech suits on the market. Other age groups are also not allowed at age group invitationals and dual/tri/intrasquad meets.

The rule, taking effect on January 1, 2017, is in response to concerns from parents and coaches that the suits were detracting from the overall experience.

After all, tech suits can:

Although swimming looks like a cheap sport, it isn’t.

Beyond meet fees, practice fees, volunteering dues, travel, and on and on, the sport begins to spiral out of control with costs.

For families who have more than one swimmer in the water as my parents did with myself and two sisters, the sport is not cheap. Having to purchase multiple $400-600 tech suits, whether it’s your child’s favorite kneeskin or jammer–per year is just another swift kick to the groin of the purse strings for parents.

This added expense isn’t good for the long term growth and health of the sport–one of the reasons that swimmers quitting swimming is because of the prohibitive costs.

Tech suits have been touted as game-changers for swimmers, a residue of the rubber suit maelstrom that took place in 2008-2009 (particularly at the world championships in 2009 where 43 world records were shattered—most notably by Peter Biedermann of Germany who dropped 4 seconds off his best time in the 200m freestyle to swim an unearthly 1:42.00).

That period of time left a deep impression on the swimming consciousness that has lasted to this day about what tech suits can do for swimmers in the water. While the effect of the suits is there, it’s not nearly as potent as it once was. Particularly when you consider that the suits that were worn then (the full body suits), don’t compare to the coverage that today’s swim jammers provide.

The swim suit manufacturers design these suits for older age group swimmers and up.

At a recent age group meet I was at, a couple 8 and unders were wearing tech suits, clearly the smallest sizes available, and they didn’t fit properly. I can only hope that the parents who dished out $500 for their swimmer’s kneeskin were quietly hoping, “She’ll grow into it…right?”

Detracts from the fundamentals.

Tech suits should be used as the veritable cherry on top of your training—it’s the last thing you should be worried about, and you shouldn’t be placing a single iota of faith in it to increase your performance.

Only you can do that. Not the suit. We are past the days where suits can make or break a swimmer.

Confuses the source of improvement.

One aspect to tech suits that doesn’t get enough attention is that it confuses swimmers and parents as to the source of improvement.

At the age of 8, 9, even 12 years of age, swimmers are dropping time like crazy. Just by the fact that these young swimmers are growing at a rapid rate, while also accruing the quick gains that come with the early stages of mastery of skill, best times are gonna happen regardless of what kind of suit they are wearing.

When a young swimmer puts on a tech suit and drops a couple seconds, it cheapens the hard work they did to get there as they almost certainly would have gone a PB anyway.

Save the tech suit for later, when your skills and conditioning begin to mature, and that tiny, fractional drop you’ll get from the suit will actually be appreciated and will actually make a difference.

You’ll have to keep a separate list of best times.

You are buying a best time (and the pressure that comes along with it).

In a lot of cases the swimmer isn’t working harder. Or improving their start. Or showing up to more workouts. They are being gifted a faster time than they deserve.

At the age of 8-12 the times don’t even really matter.

During that time kids should be dialed in on technique, developing a legendary work ethic. Kids don’t need the pressure that comes along with dropping $600 on a suit.

If it’s about emulating the best…save the suit for the big meets.

A lot of NCAA division I schools, during their dual meet season, will compete only in regular old “Speedos” or briefs, saving the tech suits for the conference and national championship meets.

Beyond the fact that these athletes are some of the best swimmers in the world, these schools are also sponsored. 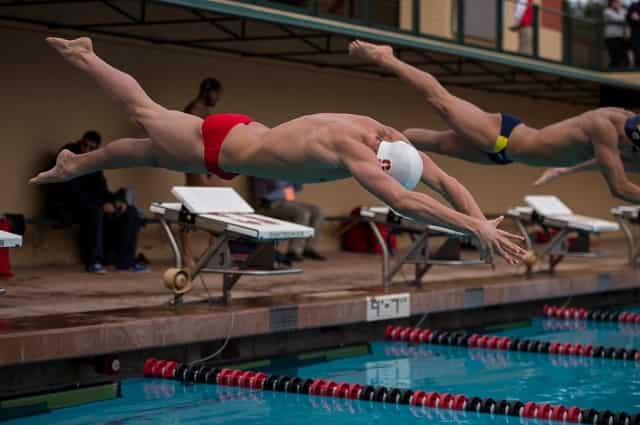 When Are Tech Suits Appropriate?

As the SoCal Swimming policy shows, organizations are being forced to act on the issue. They have to, after all, making the sport accessible is part of their mandate. Even as far back as 2009, Swim Ontario, the largest provincial swimming organization in Canada, banned the rubber suits for swimmers under 14-years of age.

Some swim parents will note that they use the tech suit as incentive, or as a reward. Having to “earn” the suit via performance in the water, whether it’s qualifying for sectionals, nationals, or whatever, is another way to insure that swimmers are focusing on improving the fundamentals of the sport first.

(This veers off into the lesson of delayed gratification, and the importance of teaching it, but that’s a whole other topic.)

While national organizations are unlikely to act (they are sponsored by the major swimsuit brands, after all), many teams are now being forced to put tech suit policies into place in order to level the playing field and keep the sport affordable for young families.

For many of them, there is a cut-off date around 12-13-years where athletes are not allowed to rep the suits. And even then, it’s only at the major championship meets that swimmers are encouraged/permitted to wear them.

One such team, Patriots Swimming, have had their own tech suit policy since 2012. Here are some notes from their guidelines (emphasis is mine):

10 and under swimmers should not use technical suits…There is no documented evidence that technical suits benefit performance in that age demographic.

The cost of technical suits makes them unattainable for some athletes. We do not want to add any pressure on parents by increasing the cost of our sport.

Performance is not the only evaluation of success for younger swimmers.  The coaches want to see a growth in technique, understanding of rules, work ethic, and above all character. Technical suits play no part in that.

For most swimmers who read this post they’ll nod, agree with most of it, but they’ll still want the suit.

To which I offer a final thought.

There’s a point of pride in not needing a tech suit to race fast.

But…the desire for athletes to swim fast will never go away. Especially if there is an unearned shortcut to faster swimming at their disposal.

For as long as there are swimmers who want best times you will have athletes who are tugging on their parents sleeve asking for the newest, shiniest tech suit.

Ryan Lochte Signs with TYR; Launches “Just Let Me Work” Campaign. Lochte is back post-Rio debacle, and sponsors including PowerBar and now TYR are lining up.

Speedo Tech Suits: The Best 8 Speedo Racing Suits for Dominating the Pool. We break down Speedo’s racing suits from their top tier suits to the more affordable suits.

7 Best Boy’s Swim Briefs for Swimming. Looking for swim briefs for your little swimmer? Hit the swimming pool with confidence with this breakdown of the best swim briefs for boys.