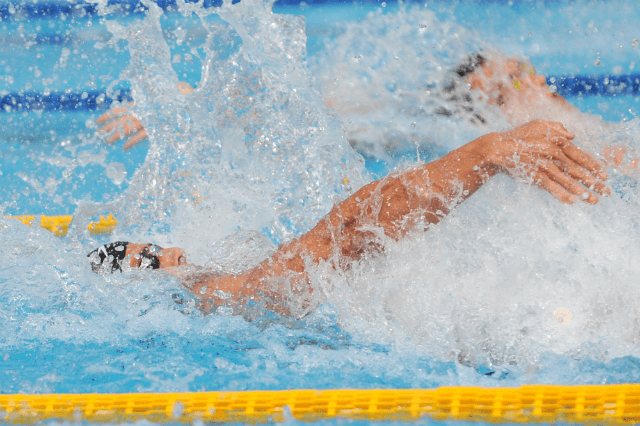 Greatness, on the outside, looks exceptionally appealing. Along with achieving at a high level comes self-satisfaction, the recognition in the form of awards and records, and the knowledge that we have ascended to the upper peaks of our abilities.

There will be moments over the course of the long haul of a season where you find your commitment wavering. Where the shortcuts begin to look extra enticing. When rolling over and ignoring that morning alarm becomes easy to the point of normal.

While experiencing these dips is common, staying the course and achieving greatness isn’t.

Here are 7 quotes to help you stay motivated to stay on the grind towards achieving greatness:

1. Greatness is a choice.

Many of us are under the impression that greatness is something that is bestowed upon us. And while talent does play an undeniable role, how far you get both in life and in the pool will rely much more on your tenacity and willingness to be great.

Choosing greatness seems like a no-brainer—after all, who wouldn’t want to dunk themselves in the pool of greatness on a daily basis?

But how many will actually make the decision day in and day out to be great?

2. You can tell the greatness of a man by what makes him angry. (Abraham Lincoln)

When we sit back and actually look at the things we get worked up over it might make us feel a little foolish.

Some of the common things that make us angry: Getting cut off in traffic. That friend who doesn’t text back in a remotely timely manner. A piece of technology that fails us.

Some of the common things that makes great swimmers angry: Wasting an opportunity to train. Not giving a full effort at practice. Knowing they could have done more.

We choose the things we get angry about. Will you choose to be angry about the inconveniences of life, or the fundamentals of your swimming?

3. Greatness is not a result. It’s a state of being.

In dreaming of our goals we think about a concrete result.

A gold medal. A best time. A world record.

But what the truly great swimmers understand is that while it is important to have those lofty ambitions, what is more important is priding themselves on being the type of athlete who develops the scaffolding, the systems, the routines, the day-to-day habits and rituals that will eventually produce those results.

That is where greatness is inherently found.

In the seemingly boring routine of showing up every day. Of making good life decisions when no one is watching.

The idea of perfect and frictionless progress is an appetizing one. When we think and dream about success we consider in these broad and simple manner:

But what really happens, what needs to happen, is the hard stuff. The setbacks. The failures. The friction. The grind. Whatever else you want to call it.

The moments that will test you, that will push you to the brink of giving up.

Make no mistake, you need these moments of strife. Why? Because they are precisely what will separate you from the rest who crave the exact same thing.

Greatness doesn’t manifest itself in a moment. It’s not developed by a single race, or an individual snippet of time. It is honed, groomed and carefully and laboriously assembled over a long period of time. Piece by piece. Yard by yard.

It is the sum of a thousand small victories, of a million little moments where an athlete could have said yes to a night out, but said no, or could have rolled over when their alarm clock went off, but didn’t, or could have left practice early, but did the hard and lonely extra work.

A gold medal might make someone great, for that fleeting moment is the only piece of insight we have had into a champion’s journey.

We don’t see the two-a-days, the lonely extra sessions when everyone else has gone home, or the countless small steps.

6. Greatness is a road leading towards the unknown. (Charles de Gaulle)

To chase and attain greatness you will have to do things you have never done before, with no guarantee that you will achieve the results you so badly crave.

This in itself is enough to prevent most people from ever making an honest effort. These are the swimmers that are constantly seeking validation, asking if they are capable, asking if they have a shot, all the while not fully investing themselves in giving themselves the opportunity to find out.

To be great is not normal. It is weird. It is rare. And if anything, it is wholly abnormal.

To do something you have never done before, that nobody else has done before, requires a certain amount of stubborness and a rageful self-belief in your mission that for most will seem mad.

Escaping the mental lockstep of what is normal, the patterns and expectations of what is supposed to be conventional requires you to be a little mad, a little crazy, and a little stubborn.