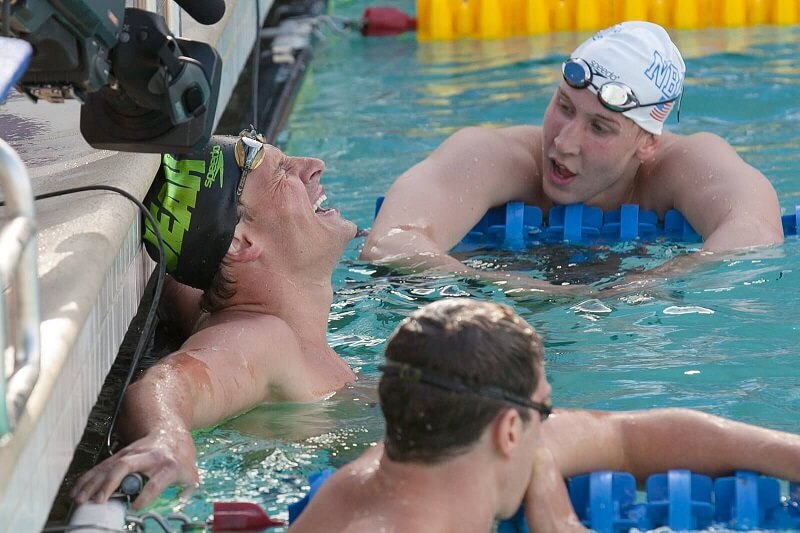 Whether it’s a random, flukey injury a la Ryan Lochte getting tackled by fan and spraining his knee, or it’s a recurring, chronic injury that you just can’t seem to shake, being injured stinks.

I get it. I’ve been there. From a 5-inch gash on my arm, to separated shoulder and fingers, broken limbs and chronic swimmer’s shoulder (both sides), I’ve been there as well.

But all is not lost, my chlorinated homie.

After all, you’ll be back.

All you can see and think about is the injury, the training time it’s costing you, the magical performance at the end of the year, and every other worst case scenario you fantasize about with all this newfound time on your hands.

But you know what?

You will be back. And you won’t be nearly as far behind as you think.

All the work you have done won’t evaporate after a few days off. General muscle strength will stick around after a month of non-activity and the sport-specific muscle fibers take about two weeks completely without a workout to start to deteriorate.

A couple days off won’t kill you or your swimming, and if anything, the added rest will actually end up benefiting you and launching you back into your training with a fresh slate physically and mentally.

There are other things you can do.

Top swimmers train around their injuries.

When Michael Phelps broke his wrist the year before Beijing coach Bob Bowman had him riding the bike for up to 4 hours a day.

The golden rule is that if it is going to impede the healing process, don’t do it.

With the prevalence of shoulder injuries in the sport of swimming you know already that there are lots of ways to train around a hurting shoulder. Can you think of a soft spot in your swimming that you can now fully place your attention on? Things like vertical kicking, for one. Core work, for another.

There are options to train on, but it’s on you to be proactive about it.

Use it as an opportunity to come back smarter.

If you are Ryan Lochte you can bet that you are going to get yourself into a power stance and brace completely the next time a fan comes running at you.

If, on the other hand, this is a recurring injury, it is time to get serious about coming back better prepared. If the same injury is causing you problems over and over again you need to commit to making a change moving forward.

This means looking beyond healing and having a pre-hab plan in place that you are actually going to stick to this time.

You are watching your teammates train, improve and continue further down the path towards swimming awesomeness, and the itch to get in and throw caution to the wind can grow louder with each passing day.

You feel slightly removed from the social group, and because you aren’t a direct part of the struggle and the training that you are on the outside looking in.

It’s frustrating having to sit on your hands and bide your time to get back in the water, but if your recovery hinges on it do whatever you gotta do to be patient.

You will, after all, be back.