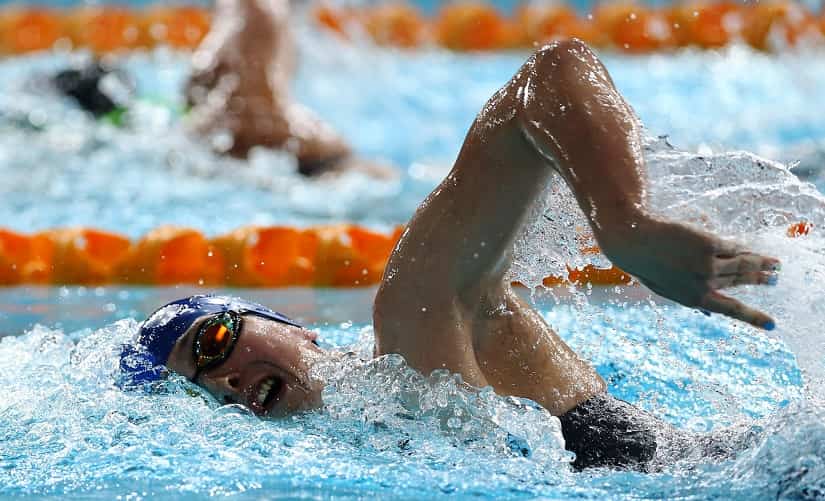 At some point you’ve been told how important it is to swim freestyle breathing bilaterally. Here is how balancing out your breathing will help you become a faster swimmer.

The breathing pattern is every three strokes, not every stroke!”

“What’s the big deal,” you might have muttered to yourself.

For most athletes, breathing isn’t much of a concern. Swimming is one of the very few sports where breath control is a serious consideration—when to breathe, how often to breathe, what side to breathe, and so on.

Today we are going to take a deeper look at bilateral breathing.

We are going to cover when you should be doing it, when you should avoid it, and how to avoid the injuries and performance limitations that come with being a one-sided breather.

More importantly, you will learn how bilateral breathing will mold you into a faster and stronger freestyler. 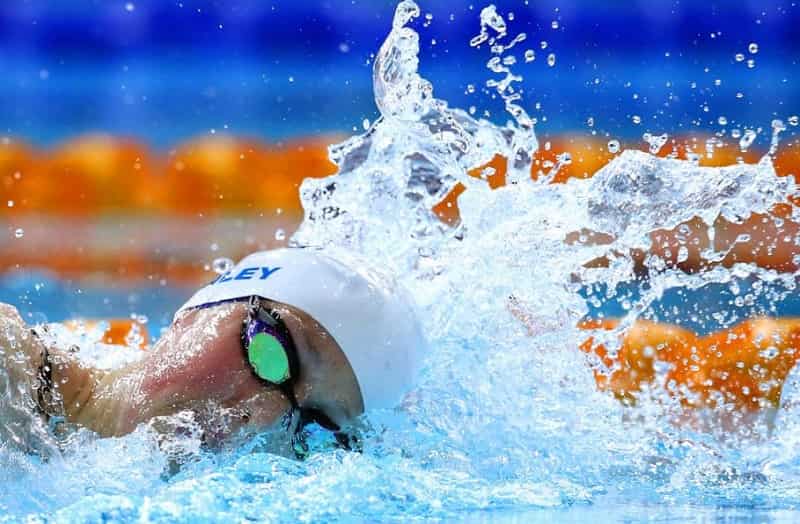 Some researchers set out to see if freestylers were faster sprinting over a 25m distance without breathing. One group was told to breathe to their usual side, and the other did the length without a breath.

The reason that the mouth-breathers swam slower is because technique changes when we breath. Another study of international and national level swimmers found that shoulder and hip roll increased dramatically to the choice of breathing side.

In other words… The way we breathe has very real effects on our technique. Our freestyle form and technique are influenced by how often and how we breathe.

But we still have to breathe. The solution isn’t to put our head down and swim our brains out until we pass out.

Like discussed in this piece on how far you should dolphin kick underwater, breath restriction inevitably leads to oxygen deficit and respiratory stress that can leave a swimmer staggerin’ and gasping by the end of the race.

You need oxygen to swim fast. There is no getting around that.

Understanding that breathing changes our technique it’s essential to spread it out between both sides so that you develop a stronger, fuller stroke that is also technically even.

I am just about as guilty as anyone of favoring a side. Combined with shoddy posture it landed me on the IR list more than a few times through high school and university. Every time I would come back from a fresh bout of swimmer’s shoulder I would vow, “Bilateral for life!”

Three weeks later, with my shoulder not bothering me anymore I would slowly lapse back into the comfortable two-stroke. (Until it got injured again. Never said I was a quick learner.)

Going bilateral can be infuriating for a couple different reasons—

Later on in the post we’ll discuss a few ways to ease into making bilateral breathing a staple of your training. 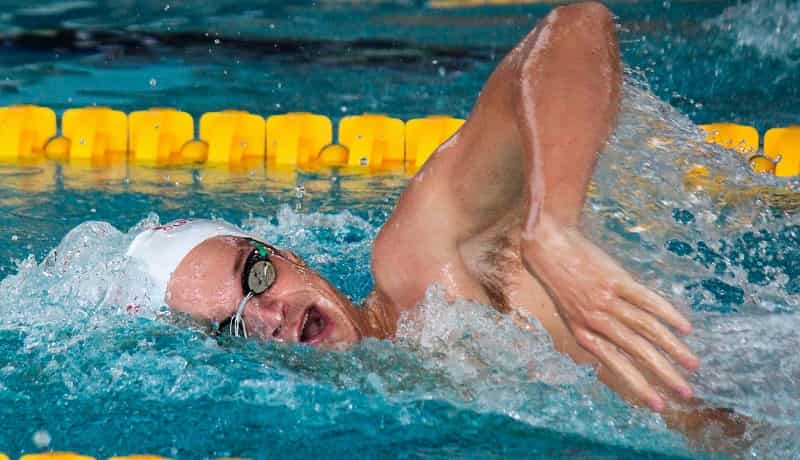 Why Bilateral Breathing Is Critical

Balances out your stroke.

Imagine for a moment that you were a sprint runner, and that one of your legs was 25% weaker than the other. Not only would your running trajectory lean towards your weak side, but you’d be missing out on a bunch of performance benefits.

Having a weak side also primes you for injury: it creates a weaker arm (that is vulnerable to injury when you hit heavy training), while it also puts your dominant arm in a constant state of having to make up for your weak arm.

You are only as fast as your weakest link, and having a truly dominant side means you are missing out on some serious torque and speed in your swimming.

It gives you breath control.

Most swimmers breathe every two strokes as default. Which means that when it comes to race time, and our example swimmer needs even more oxygen than is typical, they are scrambling to get filled up on oxygen that they need.

Breathing bilaterally teaches you to control your breath and oxygen intake and condition yourself to being able to do perform better with less, so that when it comes to race time you can greedily gulp down that oxygen and fuel that high octane swim.

For novice-ish swimmers it helps you swim straight.

If you are consistently only breathing to one side, it’s hard not to feel the tractor pull of your weaker side not pulling as hard as your strong side.

This can lead to fish tailing, straight up drifting, and swinging your arm wider on the breathing side, which can lead to the other arm being impinged (hello there swimmer’s shoulder, how are ya).

Teaches you full rotation on both sides.

Breathing to one side inevitably leads to less rotation. Because you aren’t turning your head to breathe, your shoulders don’t rotate as much either.

Even though this was tested on 25m sprints, it’s noteworthy because it shows just how much our technique changes when we breathe. More importantly, those decreases were happening only on one side of the body.

Teaches you to breathe to your off-side.

Even after swimming for nearly 20+ years I still feel a slight edge of awkwardness when I breathe to my less dominant side. You might notice it as well—a slight hiccup in your stroke rate, or like your pulling arm isn’t catching as much water as you are used to.

Why is it important to be able to breathe and maintain pace on your off side?

It can come in handy during races when you need to take a peak at the swimmer next to you but don’t wanna hiccup your stroke. Tactically, being able to jump between sides is an advantage when you need to go all Chad le Clos and see what the competition is up to.

But, but…elite swimmers don’t breathe bilaterally, so why should I?

But that doesn’t mean that this is how they trained.

As an example of what happens when elite swimmers aren’t conditioned for oxygen deprivation, all you have to do is watch the 400m freestyle from the most recent Olympics.

Sun Yang’s sloppy breathing probably cost him a gold medal in the 400m freestyle at the Rio Olympics—he breathed to both sides both in 5 strokes into the wall and 3 strokes off of it on the final turn, giving Australia’s Mack Horton just enough momentum to edge out Yang at the finish.

The oxygen demand going all-out in the water require you to breathe a lot.

Think about it: you would never see a 400m track athlete holding his breath. Or even a 100m track athlete, for that matter. They are gonna stoke as much oxygen into those throttling muscles as fast as they can.

Ain’t nobody got time to breathe every three strokes during an all-out effort. But that doesn’t mean you shouldn’t be making it a habit in practice during lower intensity work. 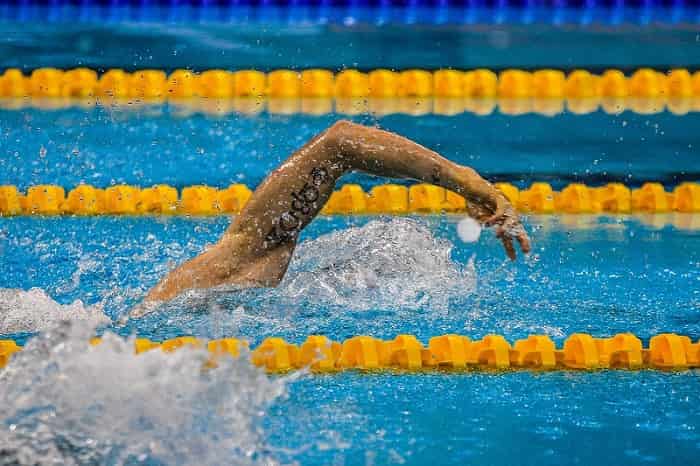 How to Become a Bilateral Breather & Balance Out Your Stroke

Breathing to the same side is a tough habit to break. I get it. But with a little bit of attention and focus during the lower intensity reps in the water you can start to even out your breathing patterns.

Here are some ways to set you on the path to bilateral glory:

The easiest way to achieve a more balanced stroke is by using a swimmer’s snorkel. Without the head turns to mask crossovers and lack of rotation you get a much better sense of how much—or how little-you are actually rotating your shoulders and hips in the water.

Level up this “drill” by throwing on some fins and doing fly kicks—it will help you increase your stroke rate, while also encouraging an even stroke cycle.

2. All pull work should be bilateral.

Why pull? Because without the big muscles in your legs sucking up all of the oxygen you are less winded and better situated to control your breath and breathe bilaterally.

Throw in some “lung-buster” pull sets into your workouts (breathing 3-5-7 by 50, for example) to not only help you lock down a more balanced stroke, but also teach your body to manage oxygen deprivation.

You don’t even necessarily need to breathe on an odd number of stroke cycles in order to get the benefits of bilateral breathing.

If you are dead set on breathing every two strokes (or 4), you can also pick one side of the pool and breathe in that direction whether going up or down the lane.

Bob Bowman, in training the GOAT, Michael Phelps, notes that the 27-time Olympic medalist would breathe every two strokes in practice, but would alternate sides from 25 to 25 so that “he is still getting symmetry in the breathing” and getting the rotation necessary to inflict the power to swim fast.

A simple dryland drill for laying the groundwork for a balanced stroke is to grab a long pole, bend over at the hip, and with hands grasping just beyond shoulder width on the pole/stick simulate a freestyle motion.

Your hands will be forced to be equidistant from one another, and it will help you groove that smooth, kayak-like feeling of having a fluid stroke cycle.

Inject some bilateral breathing into your training. You will develop a more rounded freestyle, help ward off overuse injuries, and teach your body how to manage its oxygen intake more efficiently.

Maybe coach was really onto something, after all.

The Top Benefits of Using a Swim Snorkel. It’s quickly become one of the most common pieces of equipment in swim bags at the end of the lane. But do you really understand how powerful it is?

Super Slow Swimming: The Ultimate Drill for a More Efficient Freestyle. Sure, it looks easy, but don’t be misled–done properly this drill will expose the soft spots in your stroke.