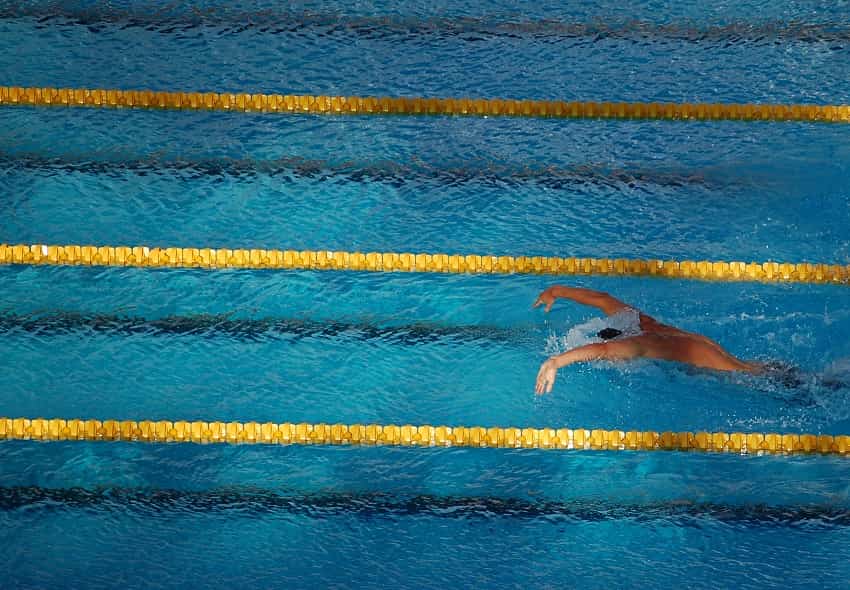 Here’s why adding one dolphin kick per wall, is the fastest way to get there.

Often when swimmers talk about improving their underwaters it’s after watching someone like Michael Phelps, Florent Manaudou, or Caeleb Dressel decimate the competition with their dolphin kicking.

It’s awe-inspiring to watch, and hard not to feel fired up to want to go to the pool and pound away at that dolphin kick like a salmon in its death throes.

What will often happen next is this: Our example swimmer will go to the pool, try to push their underwaters all the way to 15m for a few hundred meters, or maybe half the practice. Soon as exhaustion and the realization that they are still faster above the water for a majority of the time they are underwater sinks in, they return to their old dolphin kicking habits.

While good intentioned, the secret to developing a thunderous underwater dolphin kick isn’t to go from 5m breakouts to 15m breakouts overnight. Not only will this kind of breath-holding be difficult for a swimmer who isn’t used to it, but it’s likely that your underwater dolphin kick from 5-15m isn’t presently faster than your swimming speed. (See: How Far Underwater Should You Be Dolphin Kicking?)

How to Improve Your Dolphin Kick Sustainably

The free-range and sustainable way to improve that dolphin kick is through the boring (and proven) method of marginal gains. It’s making small jumps and improvements, which are doable in the short term, and viable over the long term.

That’s why if you want to improve your dolphin kick you need to start by adding one kick per wall for an entire practice.

No more, no less.

Look, I get it–the problem with “one kick” is that it doesn’t feel substantial enough.

But it can add up exceptionally quickly when you stick to it.

Let’s say that your swim practices average 4,000 meters (or yards). Swum short course this would give you 160 push-offs and breakouts. That’s 160 extra dolphin kicks…per practice.

Now, if you train 6 days a week, with a couple early morning workouts in there as well, for a total of 8 workouts, we are looking at an additional 1,280 dolphin kicks per week.

You think you’ll start to see some improvement pretty quickly doing that much dolphin kicking?

You bet your butt.

And definitely more than if you tried to hold an unrealistic standard before quickly burning out on it.

More importantly, you will be working it at all speeds if you do it from the beginning to end of your workouts. You’ll be doing that one kick during the intense race pace stuff, during your drill work, during your lactate threshold work, and so on.

Michael Phelps, in his 2009 autobiography No Limits detailed how Bowman and Phelps realized in 2002 how much of a weapon the underwater dolphin kick could become.

Coach and swimmer began to progressively include more and more of it in their training:

“The rules say you’re allowed to kick underwater off the turn for a full 15 meters. During the summer of 2002, Bob and I resolved to work that dolphin kick into my training, into my IM sets. If we did ten 400 IMs, for instance, I would dolphin kick (to 15m) on the last two, from breast to free; then work my way up to four, six, eight, and finally, ten.”

Start with one kick, and then in a week, add another. And another.

The key to improving that dolphin kick of yours is consistency, not showing up and doing 15m walls for one workout and then getting frustrated you aren’t seeing results fast enough.

How to Improve Your Underwater Dolphin Kick. Our flagship guide with tips and advice from biomechanists, Olympians and even a space scientist!