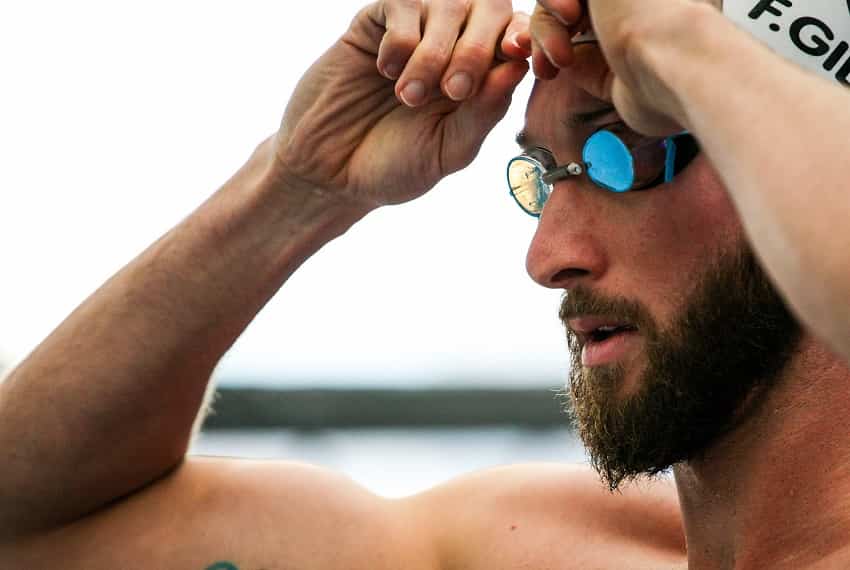 “In a race, at the threshold of pain, you have a choice.

“You can back off – or you can force yourself to drive to the finish, knowing that this pain will become agony.

“It is right there, at the pain barrier, that the great competitors separate from the rest.  Most swimmers back away from the pain; a champion pushes himself on into agony…

“If you can push yourself through that pain barrier into real agony, you’re a champion.”

Swimmers like to make a point of how much we suffer and grind in the pursuit of faster times in the pool.

Much of this is warranted.

There are plenty of early morning practices, holiday training camps, calf cramps and moments huffing and puffing into the gutter to go around.

But when it comes to the daily management of pain and suffering that swimmers experience in the water, there are better ways that we can respond to the challenges and distress.

Not having a clear perspective on pain means you are missing out on a lot of cool stuff in the water.

Swimmers who are unable to manage pain properly: 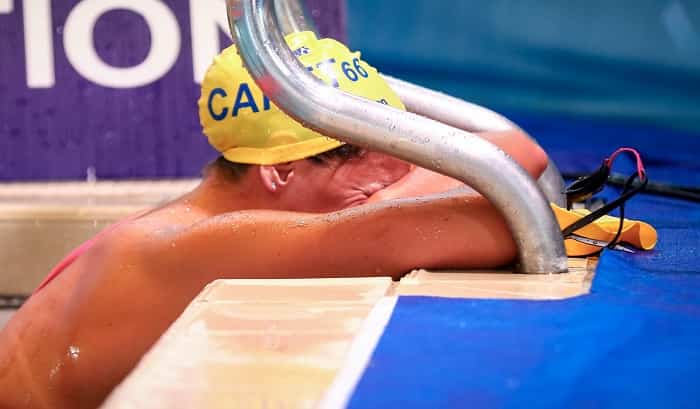 A fuzzy and misguided relationship with pain makes it worse

Funny enough (but not really), swimmers who don’t manage pain properly, or who view it in an entirely negative context, are likely to feel the effects of pain even more.

Pain, hurt, the grind—it is largely psychological and subjective.

Any swimmer knows this, even though they might not realize it:

When they are feeling good in the water, and they are kicking the chlorine out of the swimmer next to them, the pain and exhaustion is manageable. It’s “good” pain.

The same effort and speed, however, feels harder when that swimmer is losing or their stroke doesn’t feel as good as they hoped it would. When we lose, or swim slower than we expect, the pain feels, like, 30% more pain-ey.

The two flavors of pain

There are two types of pain swimmers experience in the water.

There is exertion pain, which is the one we experience the most. Think of exertion pain as discomfort. It comes from giving a full-throated effort at practice. We swim, kick, pull with everything we have, our shoulders, lungs and legs sore, lungs heaving from purposeful and determined effort.

As struggley as this pain is, it passes relatively quickly, usually within seconds or minutes, and gives way to feelings of self-confidence and satisfaction.

Injury pain is the other, not-so-awesome kind of pain that is much more serious.

You know injury pain as the sharp blast of pain in your shoulder that still hurts three days after practice. It’s the shrieking pain in your knee that lingers for weeks.

And it is greatly to our body’s benefit that we have adapted in a way that this kind of pain sends up all sorts of flares and warnings. We learn from a young age to avoid things that cause us pain. Check for the backstroke flags. Tuck your arm in when swimming by the pool ladder.

However, exertion and injury pain produce the same threat warning when we are experiencing it. Our brain doesn’t differentiate between stabbing shoulder pain and burying ourselves under a mountain of off-the-blocks 100s for time. 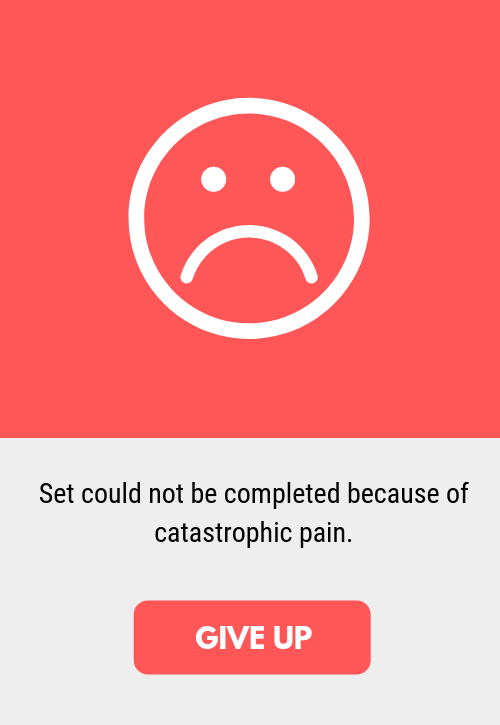 The brain perceives both as a threat, as a source of serious ouchies, and does its best to warn you in the only way it knows how, by getting you to slow your roll.

You will crater mentally before you will physically.

That supercomputer behind our swim goggles is pretty awesome at a lot of stuff, but accurately guesstimating how much energy and effort we can expend isn’t one of them.

Research has found that our brain operates with a reserve of effort, continually trying to figure out how much more effort to release. And whether or not this effort is released can be influenced.

One study with cyclists had them do a series of time trials. After performing a 30-minute TT to establish a baseline, the cyclists did a second time trial under hot and humid conditions, and then a third time trial in conditions they were told was much cooler and more comfortable (even though it was the exact same conditions as the hot and uncomfortable time trial).

The cyclists produced more power in the third time trial by virtue of believing that the conditions warranted a better effort. Nothing else changed, just the little mismatch between their subconscious expectations and perception of the effort required.

In other words, pain and effort are mental, which sounds like an absurd thing to hear when your lungs feel like they are on fire. 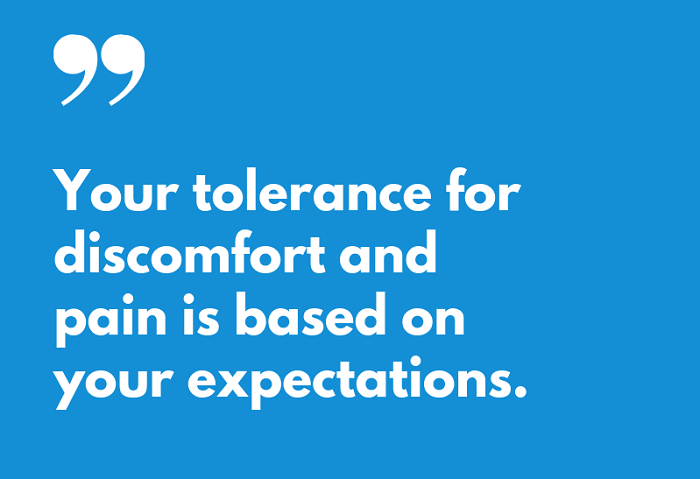 Our brain plays it safe when it comes to telling us what we are capable of. It releases effort according to your expectations. If you believe that it’s going to be a super hard set and that you are going to “die”, your brain will be cheap with handing out effort. But if you go into it knowing that it’s going to be challenging, but that giving your best won’t destroy you, your brain will be a little more willing to spring higher levels of effort.

This isn’t to say that you can outsmart muscle fatigue. That you can just will yourself through the full and complete muscle exhaustion. But you can push further and faster than you think.

Because your mind will always give up before your body does.

How to unlock more effort and speed when it hurts bad, real bad

Okay, so now that we’ve looked at some the reasons why we back off when we do, and we’ve gotten a clearer idea of what kind of pain is good and what kind is bad, let’s get into some ways that you can negotiate with your brain to release more effort, more often when things get tough at the pool.

Swim to the wall.

Something that I preach often with athletes who overthink is to swim to the wall. This wall. Not the next one. Not the wall in the next set. Or tomorrow’s workout. This wall and this wall only. That’s it.

Staying present and engaged in the moment can be difficult when you are swimming for two hours and banging out what feels an endless number of max efforts.

But the moment you start to think ahead of the next wall, your brain fast forwards to the pain that is still to come, which causes your brain to pump the brakes on your effort.

Not a lot, but enough to pull you back from giving your best effort. This decision is barely conscious—it’s not as though you are explicitly telling yourself to slow down—but it happens.

Swim to the wall.

When you swim to the wall you benefit from not getting anxious and tense from thinking about the pain to come. You spend more time focusing on executing awesome technique. Which means you are more likely to swim relaxed, efficiently, and fast.

Swimming to the wall means that you are taking on the pain in the moment, and not burdening yourself with the pain of the next lap, or the lap after that.

What have you used in the past to successfully navigate the ouchies?

Breaking news, you’ve been here before. You’ve experienced the pits of misery and ouchies that come with pushing yourself to the limit.

What were your tactics and tricks for doing so? Letting that song go round and round in your head? Counting your strokes so that you weren’t thinking about the aching? Thinking about how hard your competition was probably working at that exact same moment?

Write these bad boys down and use them again and again!

If it worked for you in the past, it will work again.

Too often we try to reinvent things when we’ve already done it before. Capitalize on those moments of successful pain-coping and leverage them for more little wins in the future.

Rethink the language you are using.

When we say that something hurts or that is painful, it’s an automatic get-out-of-trying card.

By acknowledging and telling yourself that it hurts you’ve granted your permission to avoid whatever it is that is causing you pain. On top of that, fixating on how much something hurts never makes it hurt less, right?

The level of suffering you experience in the water is largely predicated on the language and self-talk you are using while you are swimming. If you are repeatedly telling yourself, “This hurts so much” you quickly become hostage to more pain (remember that whole pain is subjective point?).

Write “Bring the pain” on your water bottle. “Conquer pain” on your kick-board. “I don’t give up,” scrawled on the inside of your wrist. 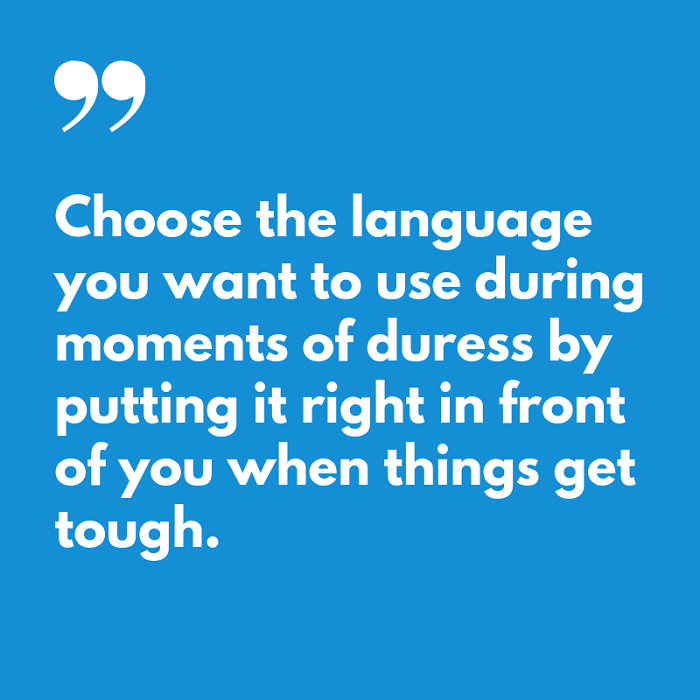 Instead, distract yourself from the agony by focusing on your performance cues, swimming to the wall, or choosing a mantra or piece of motivational self-talk to help you push through.

You can make your ability to cope with pain part of your identity, too.

Other swimmers will run from it. Now more than ever. The entitlement that a lot of athletes have nowadays means they are the first to run (swim) away from the mental and physical agony that comes with taking things to the limit.

About halfway through the 2012 movie The Dark Knight Rises, Batman and the central villain of the flick, Bane, brawl like a couple heavyweights in the sewer system. They batter each other, delivering one crunching blow after another.

Back and forth they go, and as Batman struggles to keep up with the fury and rage that is Bane, Batman uses one of his trusted tools for getting the upper hand—an EMP device that cuts the lights.

Typically, this would terrify his opponents.

But not this time.

“Ah, you think the darkness is your ally?” says Bane, unfazed. “You merely adopted the dark. I was born in it, molded by it.”

Just like the darkness, the pain is something we all fear in some measure.

Some more than others.

Which means that there is a big tactical advantage to be found here.

Pain can be the thing that forges you into something incredible.

The perseverance and being able to suffer through being uncomfortable will give you something else that you can’t fake or buy—bulletproof confidence on race day.

When you step up on the block, you will be able to thousand-yard stare down the length of the pool with a quiet sense of confidence, knowing that no one else pushed the way you did.

No one else had the courage and discipline to make pain their training partner and ally.

We tend to glorify pain and suffering as part of the process of becoming a champion. And there is no doubt that it is.

But in a broader context, it’s worth reconsidering how you view pain. After all, it brings out a ton of great stuff. When you are working hard, swimming fast, and doing things you’ve never done before, it’s not pain. It’s an intense form of enjoyment and satisfaction.

The First Thing Swimmers Need to Know About Swimming with More Self-Confidence. The way we perform on race day is connected to how confident we are when we step up on the block. Here’s the first thing you need to know about laying the groundwork for consistent, PB-crushing self-confidence.