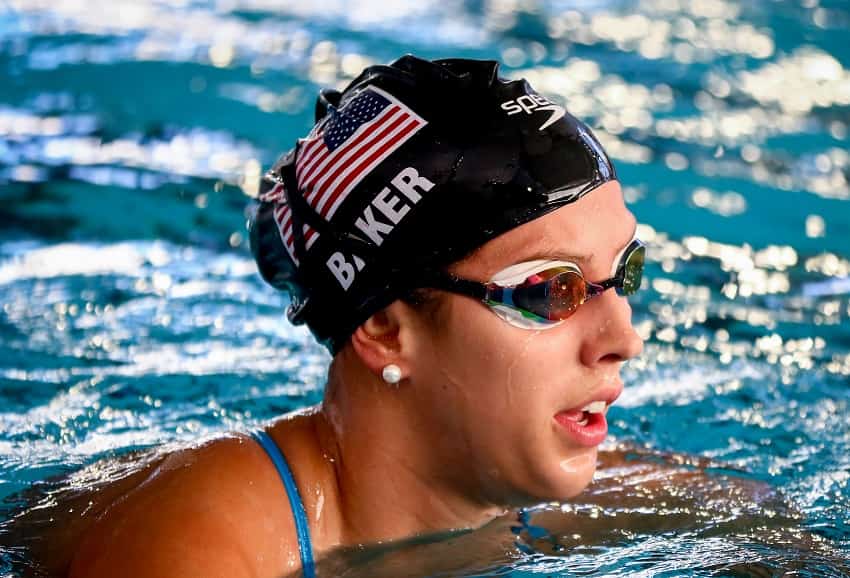 If someone were to come up to you pool-side, and tell you that there was one simple thing you could focus on developing every day that would help you swim better, have a better mindset, and even have more fun in the pool, your attention would perk up.

For you, the swimmer with lofty dreams in the water, this is an exciting development. A big part of you has always wished for this type of thing. Something that would make things easier, funner, less stressful. You know, that magical lottery ticket that would smooth over the rough patches of trying to improve in the water.

And so you lean forward, ears perked, listening carefully. The reflection of gold medals dance in your eyes. Personal best times falling like kick-board dominoes.

And if this same little someone told you that you simply needed to work on developing genuine self-confidence, and that this started with using visualization, your eyes would almost immediately roll back and glaze over. You would sigh, roll your shoulders forward, shake your head, as though I’ve already tried that and it didn’t work.

But that is because you have been using visualization wrong.

Visualization isn’t wishful thinking. It’s not daydreaming about a goal expecting to be able to achieve it by haphazardly thinking about it.

With proper visualization you are building reps of the performance you want in your mind. You are deciding in advance what kind of emotional reaction you will have to adversity. You are building self-confidence that bullet-proofs your performance on race day.

Swimming fast and swimming with self-confidence falling out the bottom of your swim cap means trusting the work.

You know, all those times you woke up in the pitch black at 4:30am to drive across the deserted streets of your hometown to jump into a cold pool. When it is Thursday afternoon, you still have four more workouts to close out a mammoth week of training, and you are wondering how on earth you will finish the week. The lung-busting main sets, lactate sandwich sets, and on and on.

But a lot of swimmers put in this work and don’t get the self-confidence from it that they should. They miss out on the bump in mindset and performance on race day that all of their training and preparation merits. Or, at least, the fast times that they think they deserve.

Visualization is a proven way to lock in that hard work so that it doesn’t desert you on account of nerves on race day.

It’s probably no big surprise that the top swimmers on the planet use this mental training skill to maximize their preparation:

Michael Phelps visualized success in the pool so many times that when his goggles filled up with the water during the final of the 200m butterfly at the Beijing Olympics, he cruised to gold and a new world record relying only on his stroke count and having visualized it so many times.

When asked afterward what it felt like to swim with water-filled goggles, basically blinded, Phelps said, “Like I imagined it would.”

Every night before bed, Megan Quann (now Jendrick) would pull out a stopwatch, close her eyes, and visualize herself winning the 100m breaststroke at the Sydney Olympics. At the 2000 Olympics she would do just that, upsetting world record holder and defending Olympic champion Penny Heyns.

“Megan has an uncanny ability to almost induce what can only be described as an out of body experience,” said her age group coach at Puyallup Aquatic Club, Rick Benner. “She can literally close her eyes and swim a race… She can time her swim and do repeats and her body responds, her breathing and heart rates increasing, muscles relaxing and contracting.”

Garrett Weber-Gale, member of that epic gold-medal winning 4x100m freestyle relay, used visualization to prepare himself for the pain that comes when we are completely and fully exerting ourselves. When legs turn to cement, our shoulders seize, and our lungs are aching for oxygen. By rehearsing himself overcoming the agony, he wasn’t caught off guard by it when it happened on race day and even came to welcome it.

Mark Tewksbury traveled to Spain the year before the 1992 Barcelona Olympics to take in the still unbuilt aquatic facility. He wanted to get a sense of what it looked like so that he could enrich his visualizations, making them more detailed, making them more real.

“I pictured winning in this pool. I imagined the feeling I would have when I looked up at the scoreboard and my name had the number one beside it. It was so exhilarating I had goosebumps just thinking about it,” said Tewksbury. The following year, he would surge past world record holder Jeff Rouse of the United States to win gold in the 100m backstroke.

To be confident when it mattered most. 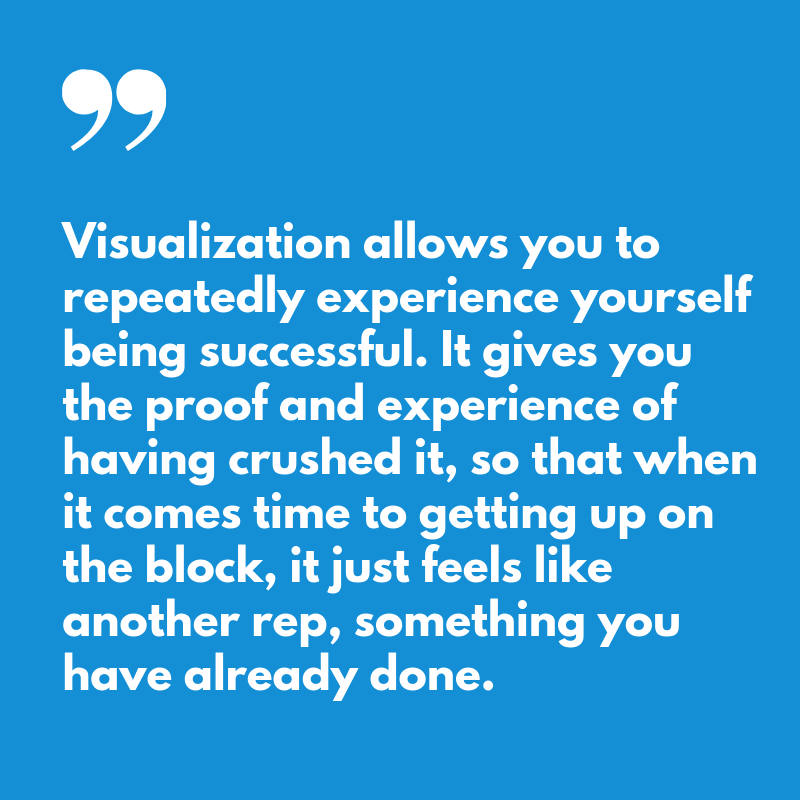 How linked are self-confidence and imagery? Like fins and paddles.

Research with athletes of all types, including swimmers, have found that those who swim to the top of the podium use visualization and are confident.

Some of the highlights:

Like everything else, how good you get at visualization depends on how much you practice it.

Practice makes you better. That you already know. But you might be thinking, I am not naturally good at this kind of thing. I have a hard time staying focused on the things I want to do, and end up nightmaring about DQ’s, coming in last, squandering a big lead on the anchor leg, and every other FML scenario your endlessly creative brain can throw together.

There is some good news on that front.

On of the studies found that imagery ability didn’t differ between the high and low confidence athletes. In other words, imagery skills were generally the same across the board—the only difference was how much they used it.

How much they practiced it.

All too often a swimmer will read up on visualization, get all fired up about it, try it three times, not see enough progress or improvement, and swiftly throw it into the trash can right along with those swim goggles that are permanently fogged up or the suit that looks more like a soggy diaper than a competitive swimmer’s training suit.

Visualization is at its most effective when used consistently. Repeated and regular use means you will get better at using this tool.

The first few times you mentally rehearse a great race you might find negative thoughts and outcomes pulling and stretching at your ideal race.

With time, and putting in the reps of your little chlorinated brain movies, you will become a stronger director.

(Not to mention, as you get better at this skill, and those negative outcomes start to pop up—What if I get DQ’d? What if the swimmer next to me takes it out like a missile? What if I lose and my parents leave me at the pool?—you will begin to visualize yourself overcoming those particular situations. Hard to overstate how handy that can be.)

As is the case with just about everything, whether it’s your favorite stroke, or doing lots of kick when you are a great kicker, those who are good at visualization tend to do it more often. We are naturally drawn to our strengths.

Which makes sticking it out for those first few weeks so critical.

You need to give your new mental training skill time to blossom into something you are good at. You wouldn’t completely discard a great new drill in the water that you know is good for you just because you stink at it the first couple times you try it (I would hope).

Set aside five to ten minutes a day to find a quiet place, close your eyes, and imagine yourself crushing it in the water.

Imagine yourself swimming with killer technique. Coming out of your breakouts like a nuclear submarine smashing through the ice. Imagine your stroke cutting through the water. The satisfying feeling of giving your total and utter best effort. The butterflies in your stomach, your heart thumping in your chest, your goggles squeezing securely against your face.

Put in the reps.

Create a library of moments in your mind where you’ve executed your race strategy, swam your best race, left it all in the water. When you walk out onto the pool deck when it comes to doing the real thing, it will feel like you’ve already done it a thousand times before.

Now that is a way to develop self-confidence.

The First Thing Swimmers Need to Know About Swimming with More Self-Confidence. The way we perform on race day is connected to how confident we are when we step up on the block. Here’s the first thing you need to know about laying the groundwork for consistent, PB-crushing self-confidence.