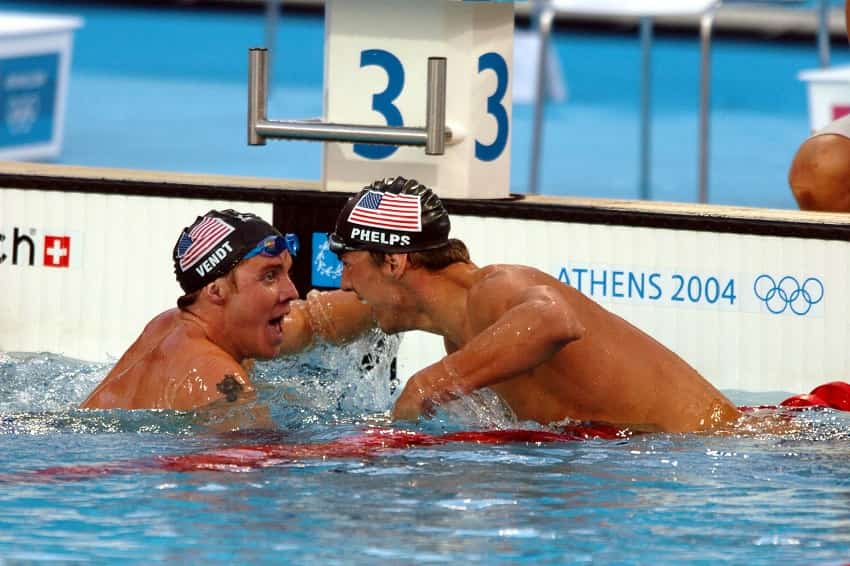 Distance swimmers put in the work.

There is a certain pride in being a member of the Animal Lane, where the workouts are longer and the yardage out-paces what most people drive in a week.

While Vendt’s accomplishments in competition were storied, it was the appetite for hard work that was particularly noteworthy. Michael Phelps, in his 2009 auto-biography “No Limits”, detailed just how driven and competitive Vendt was in the pool.

“If I was willing to work hard in practice, Erik had perhaps an even greater appetite for it,” Phelps said of his Club Wolverine teammate. “If, on a scale of one to 10, I was now turning in consistent eights at practice, very few sinking to a two, rising every now and then to a 10, Erik was maybe a nine each and every day. I had, and still have, never seen anyone work out so hard and be so competitive, both in workouts and in the racing itself.”

Vendt’s work ethic resulted in some epic performances in competition:

The following swim workout was done in June of 2007, while Vendt was training at the University of Michigan under Bob Bowman and Jon Urbanchek. At the time, Vendt had considerable endurance, with Bowman noting he “has enough endurance right now to swim the English Channel twice.”

The focus for Vendt was developing the speed to be able to get out fast and maintain that speed in order to challenge Hackett.

The below workout was typical on his training during the summer of 2007. It was done in long course meters. Some neat-o things that stick out include Vendt’s incredible kicking speed. The main set is a round of broken 1500s on descending intervals.

This is How Fast Katie Ledecky Swims in Practice. Here are two more mid-distance sets that Katie Ledecky performed in the months leading up to her world-shattering performance at the 2016 Rio Olympics. Good luck!

H/T to Michael J. Stott for reporting on this workout in the December 2007 issue of Swimming World Magazine. Image credit: Alamy Stock