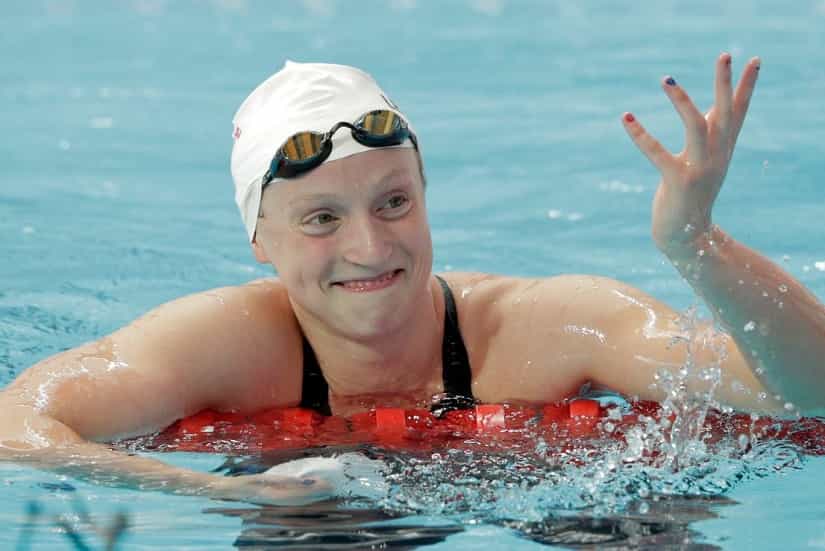 You already know that Katie Ledecky is the top female swimmer on the planet. That she’s really, really fast. And basically unbeatable. Now you’ll learn how fast she is in practice.

If Katie Ledecky wasn’t a household name before the Rio Olympics, she certainly is now.

Between having Washington nationals superstar Bryce Harper rocking one of her caps during an NL East division clinching after-party, to destroying American Ninja Warrior Grant McCartney in a completely made up kicking game on Ellen, Ledecky’s name has become ubiquitous with the sport.

In a previous post we showcased some of Ledecky’s main sets and training during her preparation for the 2013 FINA World Championships, where she set world records in the 800m and 1500m freestyles. We’ve also covered how Ledecky used a log book to help power her pre-London training, as well as how you can mirror the same goal setting approach Ledecky uses.

The original training post was a popular one—and understandably so, the interest in seeing how the best in the world is something we all experience. We want to see the superhuman training and prep that our idols perform in order to show up at meet time and smash world records.

During the most recent ASCA conference, her coach Bruce Gemmell of Nation’s Capitol Aquatic Club, presented, including a couple slides that showed off some more of her recent training and results.

The swimming workouts below were done in the lead up to Trials, and eventually Rio, and display some of the speed that she would unleash on the 4x100m freestyle relay and the 200m freestyle.

This set was performed in May 2016 and show off how remarkable Ledecky’s engine is:

The following set was completed in June of 2016, and completes the double-whammyness of endurance and top end speed that made her so unstoppable in Rio. Note that there was no additional rest between the 200’s and 100’s and that it was also done in short course yards.

Watching our idols swim, and make it look so darn easy, inspires dreams. It motivates us into wanting to be excellent, into wanting to test the mettle of our limits and achieve awesome stuff.

These sets, and the times she put down, should serve as a reminder that great performances come at the expense of having a great process. Of being willing to show up each day and deposit the hard work.

It’s no big secret what it takes to be successful in the water—all it takes is a big will.

Credit to the peeps at MySwimPro who were Johnny-on-the-Spot and took a pic of the sets at the conference.