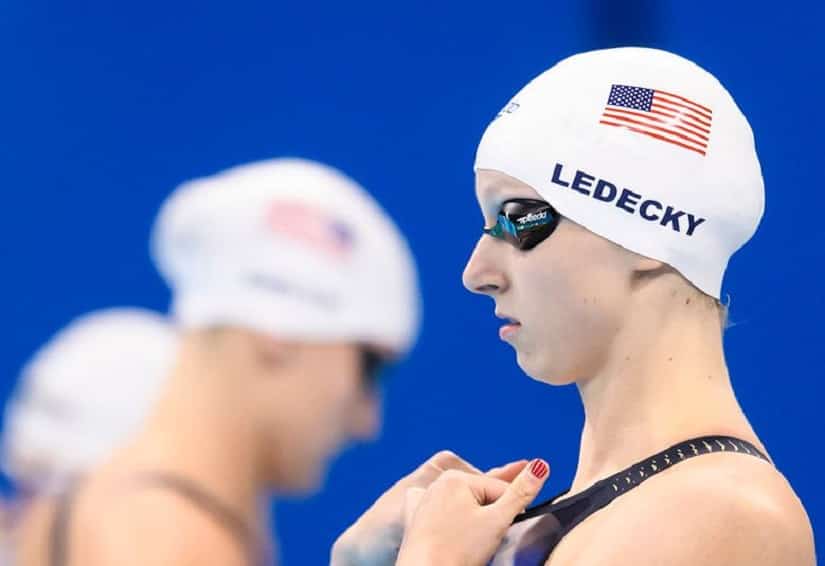 Katie Ledecky utterly dominated the sport of swimming at the Olympics in Rio. Here is how to set goals like the greatest active swimmer on the planet.

The feats and accomplishments of Katie Ledecky befuddle the mind at times, particularly for those who have been around competitive swimming for longer than a hot minute.

Undefeated in international competition since 2012.

Her work ethic has become a thing of legend, and she solidified this status while spearheading a dominant United States team performance in Rio, powering her way to five gold medals, four of them individual.

While a sweeping majority of us will never grace the deck of an Olympic pool, much less have ambitions of being there, Ledecky’s domination and unparalleled success in the water—sweet molasses she’s still only nineteen—offers some lessons for anyone who has aggressive aspirations in or out of the pool.

Here is how to set goals like Katie Ledecky.

1. Throw caution to the chlorine.

You don’t get to the pinnacle of the sport by accident, or by setting “safe” goals. Similar to the mindset that Phelps has with his “no limits” approach to goal setting,

Ledecky advises that young swimmers should dream and think big.

“I would encourage you to set really high goals,” she told the Today show during her post-Olympic media circuit after Rio.

Go big. Think so big that it scares you a little.

2. Have your goal right in front of you.

Fellow swimmers might have been confused looking at Ledecky’s pull buoy during training. The numbers “565” were printed neatly in perma-black ink.

The accuracy with which these goals were set and later accomplished is staggering when you note that they were set in the months following the Barcelona World Championship meet, where she crushed the world records in the 800 and 1500m freestyles…in 2013, a full three years before the Rio Games.

3 years ago we set out on this journey. 3:56/8:05. Congratulations @katieledecky pic.twitter.com/sUcVdphpVH

You don’t need me to tell you that the training of a distance swimmer is no joke.

A lot of meters and yards swum over years and years in the pool. Having your goal right in front of you will help keep you focused and maintain your sense of purpose during those back-breaking sets and workouts.

Okay, so you have your big, audacious goal. And you have taken the next step and written it down somewhere that you will see it every day, or every time you are training.

But that’s not enough.

Now comes the truly challenging part, the thing that makes swimmers like Ledecky into the stratosphere of excellence—the daily willingness to fail in training in its pursuit.

In training each day in training Ledecky had specific targets to hit. Stroke rates, race pace, intervals—and she would hammer away at them fearlessly.

Each day she would show up and go all out to try and hit the targets and intervals for the day. If she missed, she would come back the next day’s swimming workout with the same determination as the day before.

This kind of resilience seems easy, basic even, but it is extremely difficult mentally to be willing to fail–often spectacularly–and not be discouraged to try again and again.

Piece by piece Ledecky mastered her ideal swim over the long hours and years of training in the pool by breaking it down and going after each race pace and each stroke tempo until she mastered it.

4. Surround yourself with faster swimmers.

Rather famously, Ledecky trained mostly with male swimmers while with her club program back in Washington. During national team camps at altitude in Colorado Springs she readily “broke” some of the male swimmers during long training sets.

“Last year I was the guy getting broken by her,” said Olympic teammate Conor Dwyer, who is no slouch in the mid-distance events himself. Dwyer won a gold medal in Rio in the 4x200m freestyle relay and placed 4th in the 400m freestyle.

By racing against stronger swimmers Ledecky was insuring that she always had someone to chase down, and eventually, beat.

In order to improve, you need to surround yourself with people who are going to push and propel you to the next level. For Ledecky, this means training against some of the top distance male swimmers on the planet.

Ledecky was always coy when asked about what her goals were, dodging questions like “How much faster do you think you can go?” with a smile and “We’ll see.”

Her coach knew what she wanted to do, but the general public had no idea what she was planning to drop in Rio. Michael Phelps was similar when setting his goals—choosing to keep his goals to himself.

On the other hand, sprinters like Russian Vlad Morozov and Canadian Santo Conderelli preferred to let their goals be known, Morozov sharing his during a Reddit AMA and Condorelli posting his on Instagram.

Whichever format works best for you, roll with it.

Some athletes thrive on the pressure that comes from going public with their goals and reap the accountability benefits of doing so, while others are able to perform better in practice and competition when the pressure only comes from within.

Lastly, it’s important to note that without the ruthless hard work that Ledecky routinely puts in at the pool all the goal setting “secrets” and tips are worthless.

You can draft a purposeful goal, break down exactly what you need to do it, but without the daily commitment to seeing it through it’s just a waste of paper. Gemmell credits Ledecky’s work ethic above all else as a driving force of her rise to becoming the top female swimmer on the planet.

There’s no secret, no magic technique correction, just showing up day after day, mastering her craft and doing the work.

This is What Katie Ledecky’s Main Sets Look Like. Ever wanted to peek under the hood of what Ledecky’s training looks like? Here ya go.

How Katie Ledecky Took Her Training to the Next Level. One of the little known facts about Katie Ledecky is her use of a training journal to not only monitor her training, but set goals and even keep a gratitude list.