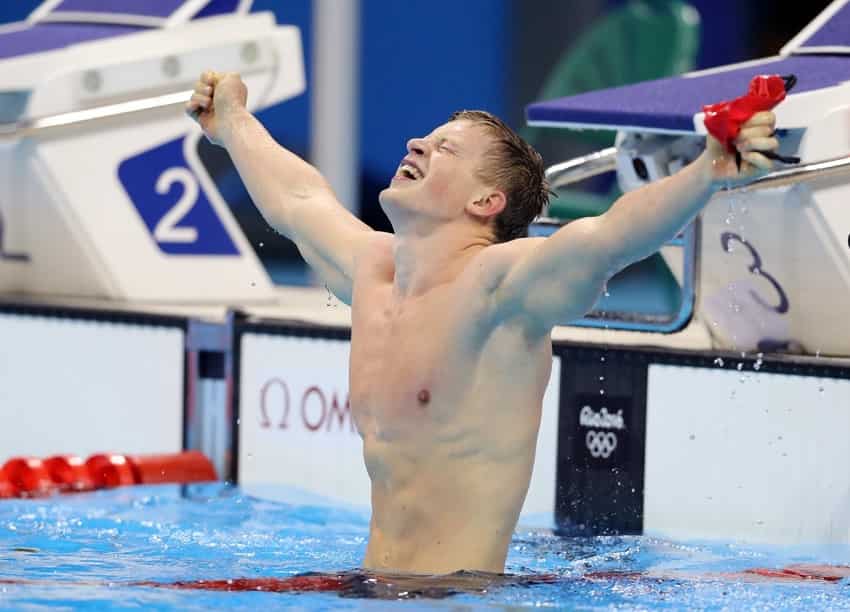 When Adam Peaty got behind the blocks for the final of the 100m breaststroke at the Rio Olympics, he felt calm. Although there are thousands of people in the stands, millions at home watching, and the expectations and pressure that come with being the world record holder, Peaty is composed.

As the race gets underway, Peaty isn’t first as the eight finalists break the surface of the water. By 25m, he has begun to inch ahead. At 50m, he has almost a body-length on defending Olympic champion Cameron Van Der Bergh in lane three.

Peaty turns, and explodes off the wall, eight one-hundredths of a second under his own world record pace.

The lead quickly grows as Peaty’s high-tempo motor hurls him across the surface of the water. Peaty’s only competition is the yellow world record line superimposed over his lane. Peaty slams into the wall, turns around, and boom—he’s smashed his own world record in an otherworldly 57.13.

It’s been a long journey for England’s Peaty, who as a young teenager struggled with the fear and pre-race nerves that came with competition.

One of the ways that he learns to bring the fight and his best effort in competition is his relentless preparation, which includes using visualization and imagery to bulletproof his races.

“It’s weird because I didn’t really get that nervous during the Olympics,” said Peaty. “I’d swum that race a thousand times in my head. I’m a big fan of visualization so I’ll always visualize my race beforehand.” 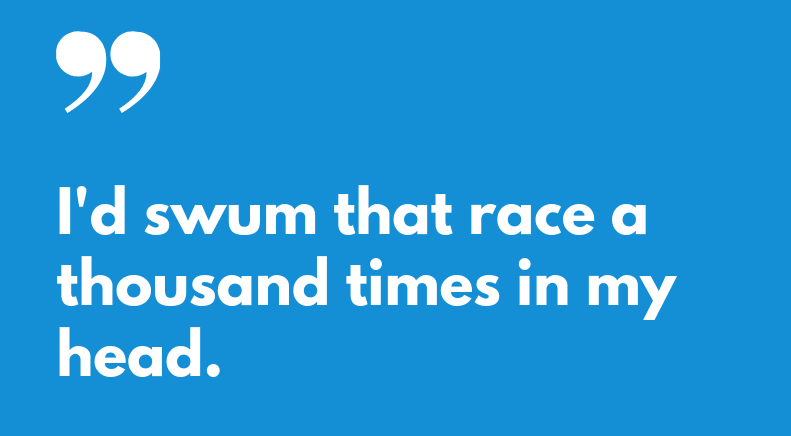 Visualization can seem a little absurd on the face of it: So, I sit here, close my eyes, and imagine myself swimming really fast, and then, in real life, I will swim fast?

Without putting too much of a fine point on it, that’s basically exactly what happens with visualization. You spend time rehearsing the race you want. The technique. The ease of speed over that first 25m. How you respond to the competition. By providing your brain with a series of repetitions of your ideal performance, you are able to lock it in with greater ease on race day.

Visualization works because it essentially reproduces the physical experience of racing. Your brain has difficulty differentiating between imagined or real-life experiences. Visualization takes advantage of this little loop-hole to give you a tool to bullet-proof your swimming.

Can visualization totally replace my training?

Well, no. It’s not that powerful.

But it can help you maximize the work you are doing in the pool and in the gym. Visualization can help you do more with what you are already doing.

Here’s how swimmers can get started with visualization and imagery.

Visualization can be used to help prepare you for the competitive environment. When you close your eyes and race that awesome race, imagine the swimmers next to you. The tiles on the bottom of the pool. Your coach standing at the pool’s edge, heat sheet rolled up. The more you “see” the more real the visualization feels.

Use all your senses.

Deepen your visualization work by imaging all the sensations that come along with swimming like a boss. The texture of the block under your feet. The smell of chlorine in the air. The quick blast of cold water when you dive in.

Go beyond just what you see and go for the full experience of what it’s like to swim like at beastly speeds. Hit as many of your senses as you can picturing yourself swimming. 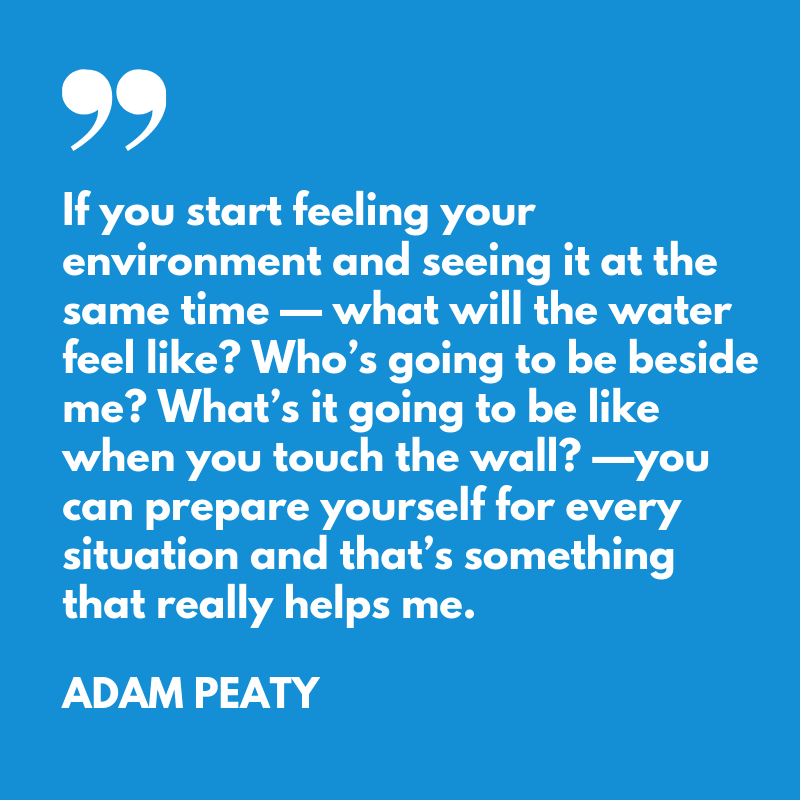 Be consistent with it.

The cool thing about visualization is that you don’t need much to get started. Close your eyes and go to town. You can sharpen your mental skills on the way to practice. Between prelims and finals at the hotel. Before bed.

The more you use it, the better you get at it, and the more proficient you become, the more your mental rehearsals “set.”

Rehearse victory and the adversity you will meet on the way.

Bulletproof your performance by mentally rehearsing the adversity you are likely to swim into—a crowded warm-up pool, not feeling great in the water, a competitor in the heat before you having a lights out swim.

You will experience adversity in competition, and you can better prepare yourself for the eventuality by visualizing yourself overcoming these moments of adversity.

Scale your imagery according to skill and ability.

Imagery works best when it matches up with your preparation, skills and abilities.

While tempting to skip ahead to your gold-medal winning performance four years from now, or daydreaming about swimming at wishful speeds, imagery and visualizations need to be believable.

Your brain is smart enough to know that visualizing yourself swimming a 1:50 when you’ve never cracked 2:00 is more wishful thinking and realistic imagery training.

Set goals for your imagery that match up to what you want to improve.

Swimmers aren’t immune to the mental frustrations that come with high-performance sport. There is that crash in confidence in the hour leading up to a race. Losing focus when things get touch in practice. Bouncing back mentally from injury.

Take the Next Step with Your Swimming

The power of visualization is hard to overstate. Just as it is a powerful weapon for faster swimming, it’s almost endlessly versatile.

Whether you want to choke-proof your performance on race day, improve your technique, or train yourself to react like a champion when under the lights at the Olympics, consistent and targeted imagery work can help you become a faster, more confident swimmer.

What is something you want to improve with visualization and imagery?

Mark Tewksbury: How Visualization Will Help You Achieve Your Dreams. At the Barcelona Olympics Mark Tewksbury swam the race of his life to win the 100m backstroke. Here is how he used visualization in his quest to win Olympic gold.