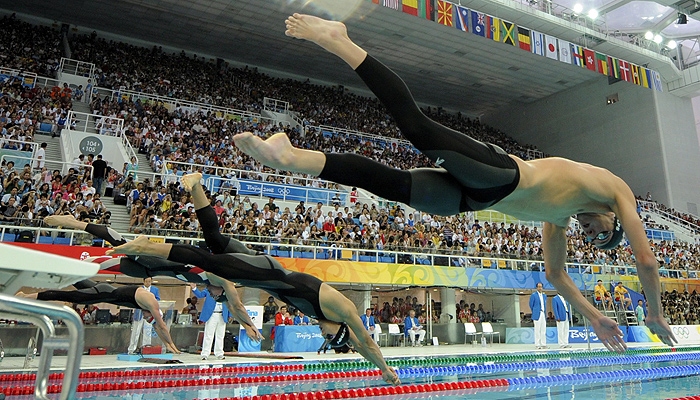 For years Michael Phelps freestyle was a dominant presence on the international scene. He held the 200 metre freestyle world record until Paul Biedermann came along and broke it during the super-suit frenzy of 2009, and was also a key piece on the US men’s 4×100 freestyle relay (also breaking the American Record in the 100m leading off that relay at the Beijing Games).

His trademark quasi-catch up freestyle stroke in combination with his phenomenal underwater dolphin work made him a menace on the freestyle scene.

THE DEVELOPMENT OF PHELPS’ TECHNIQUE

Bob Bowman, Phelps long-time coach, modeled Michael Phelps freestyle technique after legendary sprinter Alexander Popov, who dominated the 50m and 100m freestyle for nearly a decade. His smooth, relaxed freestyle was the model for Phelps’ development as a freestyler.

With a focus on relaxation, of distance per stroke, and maximizing the amount of water pulled Bowman succeeded in making Phelps a mirror image of the legendary Russian sprinter.

For a period of time after his three-month suspension after being photographed smoking out of a bong Phelps experimented with a windmill technique, deciding to change up his roster of events at major meets. The straight-arm recovery has a few advantages over the traditional bent-arm recovery—the straight arm recovery – and entry – allows the swimmer to enter the propulsive portion of the stroke quicker, and it also gives the athlete a more explosive stroke as they can more fully engage their torso to whip their arms around.

For Phelps the windmill experimentation was short-lived. For most swimmers it is very difficult to keep up that kind of explosive output for a 100 metre distance – let alone a 200m or 400m swim.

Here is a fantastic video where you can see Phelps’ freestyle technique from every angle. You also get a great view of his dolphin kick, his high elbow catch, and how his hand enters straight ahead of his shoulder: