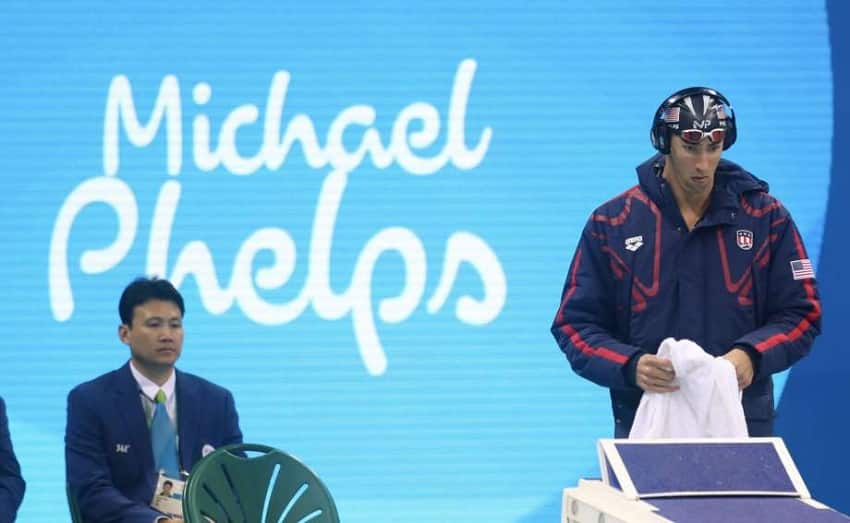 How did the greatest swimmer in history prepare on the day of his biggest performances? Here is what swimmers can learn from Michael Phelps’ full race day routine.

On the morning of the big race we wake up with a mixture of nerves, excitement, and possibly even dread. (But hopefully mostly excitement!)

With all the hard work in swim practice behind us—all those two-a-days, the reps on reps of 400s pull, the timed kick sets—now it’s time to see what we are capable of.

Although the training is behind us, and the taper has been completed, for a lot of us chlorinated athletes it’s the race day part that causes us the most problems: keeping our head straight and our thoughts positive long enough to compete at our best.

For the greatest swimmer of all time, Michael Phelps, a pre-race routine was fundamental to helping him feel in control, stay calm in the face of insane amounts of pressure, and remain laser-focused on his own performance.

In Charles Duhigg’s book The Power of Habit (Amazon), he outlined the race day routine that Phelps used during his remarkable 8-gold medal winning performance in Beijing.

To fuel himself for the grueling days of competition, Phelps started off each day eating the same race-day breakfast of eggs, oatmeal and four energy shakes.

When he arrived at the pool he would do the same well-worn stretching routine that limbered him up to help feel ready while warming up. Arms, back, chest, ankles, hamstrings—he’d target each systematically, checking them off one by one.

His meet warm-up was the same each day. (And not that different from what most of us mortals do in our own meet warm-up.) He’d start with 800 swim, mixing it up. 600 kick to get his legs warm. 400 pull. 200 drill. And then a series of 25s at race pace to wake up his nervous system and get those fast twitch muscles primed.

After that he was out of the water, wrestling himself into his racing suit. Strapped to his head were his headphones blasting his choice tunes of the moment (in Athens 2004 Eminem’s “Till I Collapse” was a favorite; in Beijing there was a mix of Jay Z, Lil Wayne and some good old fashioned EDM).

The approach was simple—maybe not as complicated or as crazy as we’d imagine from the GOAT—but it’s purpose was clear: to give Phelps a sense of control. By having a set procedure to follow he could box out what was happening around him and focus solely on executing his best possible performance.

It’s hard to imagine what the pressure cauldron would have been like on that stage. Combine that with Phelps being a hyperactive and anxious child, and you can see how this could have gone far differently.

His long-time coach Bob Bowman, having recognized the talent inherent in the gangly kid from Baltimore a decade earlier, knew that strong mental habits would be the real game changer for Phelps.

“He (Bowman) designed a series of behaviors that Phelps could use to become calm and focused before each race, to find those tiny advantages that, in a sport where victory can come in milliseconds, would make all the difference.”

Phelps Behind the Blocks

In Michael Phelps’ 2009 auto-biography “No Limits” (Amazon)—where he gives plenty of background to his Beijing performances—he went into even more detail about what his routine behind the blocks.

On the first day of the meet he had two big races—the 400m individual medley, where he was the world record holder, and the 4x100m freestyle relay (which is a separate and epic story altogether).

Phelps describes walking out for the final of the 400m IM:

“After we walked out to behind the blocks, I did what I always do there. I stretched my legs on the blocks, two different stretches, one a straight-leg stretch, the other with a bent knee, left leg first.”

“I took the right headphone out. Once they called my name, I took the left headphone out, the parka off. It’s my routine to stand on the left side of the block and get onto it from that side.”

Once he got up on the blocks he did something that any casual swim fan would recognize, the double arm swing behind the back. 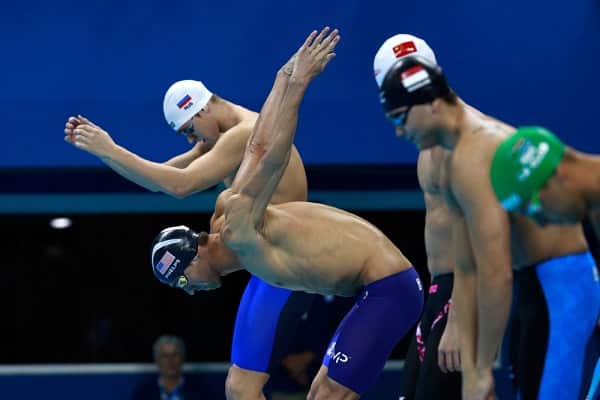 In response to those who might consider it distracting or even bad sportsmanship, Phelps says:

“It’s just a routine. My routine. It’s the routine I’ve gone through my whole life. I’m not going to change it.”

From there, there’s a clearing of the mind, the starter’s gun, and off we go.

Building Your Own Pre-Race Routine

Now, I know what you are probably thinking: that is a lot of stuff. When you break it down item by item Phelps’ race day prep starts to look more like a NASA space shuttle launch list than a recipe for fast swimming.

But your race day/pre-race routine doesn’t need to detail every moment of the big day. Just a handful of things you know give you confidence and calm.

Here are some questions to help get you started on your own pre-race routine: