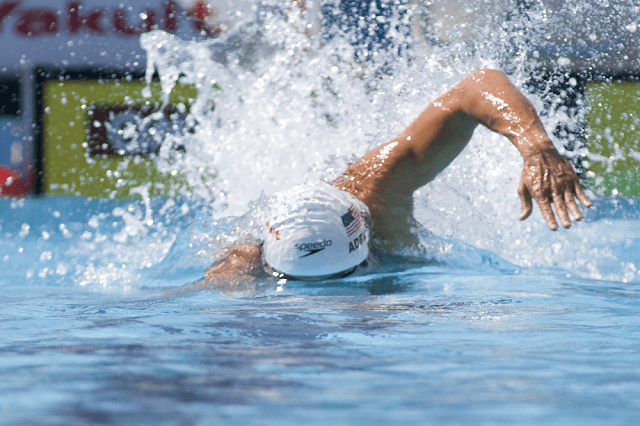 This past June most of the stars of USA Swimming descended on Santa Clara, California, for another stop along the Arena Grand Prix tour.

At the meet men’s team stars Michael Phelps and Nathan Adrian both discussed goals, and being able to find balance as a high performance athlete with all of the other demands of life, including school.

“I can pick something, set my mind to it,” said the 22 time Olympic gold medalist. “And not let anything stand in my way of me being able to achieve it.”

Michael Phelps and his coach Bob Bowman have always been strong proponents of goal setting. In the lead up to the Beijing Olympics he had a sheet with all of the goal times that he wanted to achieve for the meet, including splits. Remarkably, with the exception of two races – the two butterfly events – Phelps beat all of the times he set out for himself.

(To be fair, in the 200m butterfly In Beijing Phelps goggles started leaking nearly from the get go, and with 75m to go had filled up to the point that was blind as a bat. “Not the black line, not the T,” he told 60 Minutes shortly after the Games when explaining how blind he was. He managed to finish the race by virtue of stroke count. While he still managed to set a WR, it’s not known how far off he was of his goal time.)

For Phelps, during the 5 years leading up to Beijing he didn’t take a single day off from the pool. Not for Christmas, not for his birthday, not even for illness or injury.

While it’s not going to be easy, the results will justify the sacrifices, Phelps said. For swimmers this includes the longer than average season, and the heaps of hours poured into training and competition.

“It’s not always glamorous, but at the end of the day, you do feel like you’ve gotten something done, and I think that’s special.”

While making sacrifices – social late night opportunities with your friends come to mind – is a part of the deal when it comes to achieving at a high level, it’s important to not allow the sport to become the sole thing that defines you.

Nathan Adrian, 100m freestyle winner in London, found time to mix graduating from UC Berkeley with his swimming exploits on the international stage. He found that the key was to make excellence not just a part of his swimming, but everything outside of the pool as well.

“You have to elevate all aspects of your life,” said the 6’6 sprint star who hails originally from Bremerton, Washington.

During his NCAA career Adrian would go from an alternate on the Beijing Games 4×100 free relay to America’s top 100m sprinter, winning multiple NCAA titles along the way for the Cal Bears. In 2012 he would graduate with a degree in public health and with honors.

At the Santa Clara Grand Prix, one of the first stops on the Phelps comeback tour, both men would go 1-2 in the 100m freestyle with Adrian winning in 48.17.