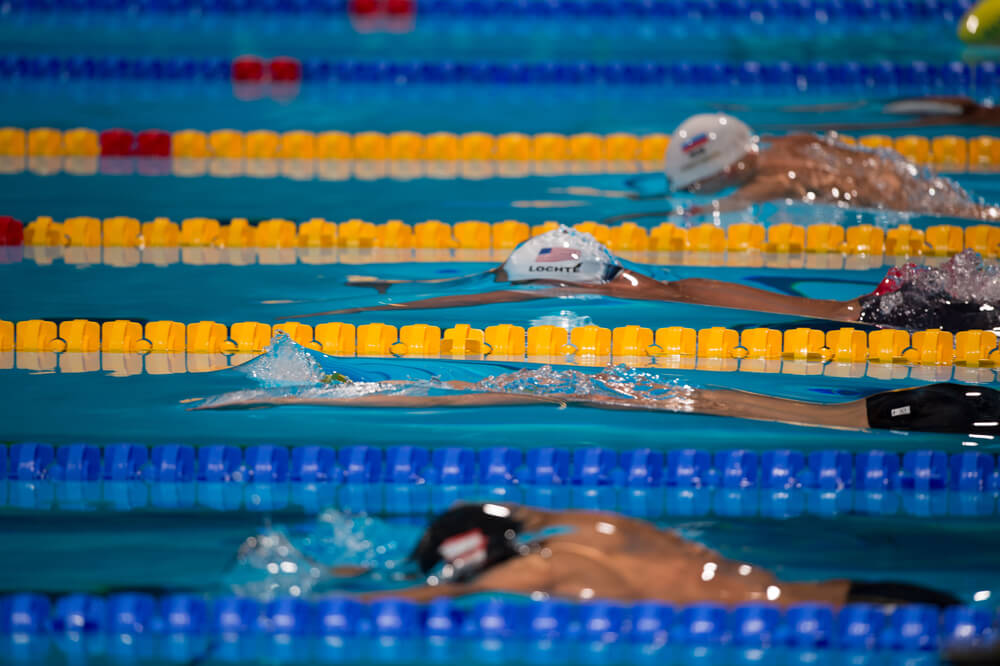 He may as well have been talking about the ready room at a major international competition. At least 8—sometimes as many as 32 in the case of relays—highly tuned athletes bunched in a small room together for up to 30 minutes before the biggest race of their lives.

Amy Van Dyken, the most successful athlete of the ’96 Atlanta Games, laughed when recalling the atmosphere of the ready room, coining it, “the white-padded room.”

In Van Dyken’s case, she took mental warfare to the next level, glaring at world record holder Le Jingy for 30 minutes prior to the final of the 50m freestyle in Atlanta. A fiery, glowering stare at the Chinese favorite to win.

“I knew that I could physically not beat her, but mentally I could. I pulled out all the stops. I glared at her so hard. I stared and kept staring,” said Van Dyken, who would win by three one-hundredths of a second.

The legendary Mark Spitz, the original Phelps, was not immune to playing mental games on the competition either.

SEE ALSO: How to Mentally Stay in Your Own Lane

During his 1972 run in Munich, where he would win 7 gold medals, he feigned being sore and injury in the ready room prior, having his coach Sherm Chavoor tag along and massage his “injured” shoulders while Spitz feigned a grimace.

“My competitors would stare at us with their mouths open,” Spitz would recall in later years.

Victor Davis, a fiery Canadian who at one point held the world record in the 100m and 200m breaststrokes during the 1980’s would splash water all over himself in the moments before a race, often simultaneously dousing swimmers in the lanes next to him.

For the coup de grace, however, he would throw some water in his mouth and spit it into the competitor’s lane next to him.

For Davis, this intensity wasn’t an act. In what turned out to be one of the more controversial (and I hesitate to use the word) moments in Canadian swimming Davis kicked a plastic chair across the pool deck at the Commonwealth Games. In front of the Queen. Oh, the horror! (But seriously, the media made a big deal out of this.)

Mental warfare on the pool deck is nothing new. For as long as there have been elite swimmers there have been mind games. Don Schollander, recognized as an 18-year old that all swimmers at the top level were nearly identical in talent and training. What set them apart was the mental toughness they had at crunch time, and the ability to psych out the competition before the race.

In one such event, highlighted in his auto-biography Deep Water, Schollander was in the ready room before the 100m freestyle semi-final at the 1964 Games. One of his competitors, France’s Alain Gottvalles had been doing some talking, boasting he could crush a bottle of wine and smoke like a chimney on a daily basis and still be the fastest swimmer on the planet. Gottvalles, just a month earlier, had established the standing world record at 52.9.

The implication was crystal clear—Gottvalles would be unable to escape the wrath and fury of Schollander.

The following evening Schollander would handily win the 100m freestyle in an Olympic record time of 53.4.

Gottvalles, despite his swagger in the run-up to the Games, placed outside of the medals in fifth. Schollander, meanwhile, would go on to win 4 gold medals at those games, becoming the first swimmer in history, and only the second athlete to do so.

The ready room antics aren’t always just limited to stare-downs and mental combat. Sometimes it even gets physical.

At the 2011 world championships Australia’s Alicia Coutts had a ready room incident that set the bar pretty low for what some athletes are willing to do to get that critical mental edge.

According to Coutts a European rival (who she wouldn’t name in subsequent interviews) elbowed her in the head a couple times while they waited to march out on deck for the final of the 100m freestyle. To add insult to attempted injury, the offending swimmer then turned and spat on the ground at Coutts feet as they walked up the stairs to the pool deck in Shanghai.

The reserved Coutts, who was understandably shocked at the aggressiveness of her competition, took it in stride. “She obviously thought I was a threat,” Coutts said afterwards. “She felt she needed to put me off.”