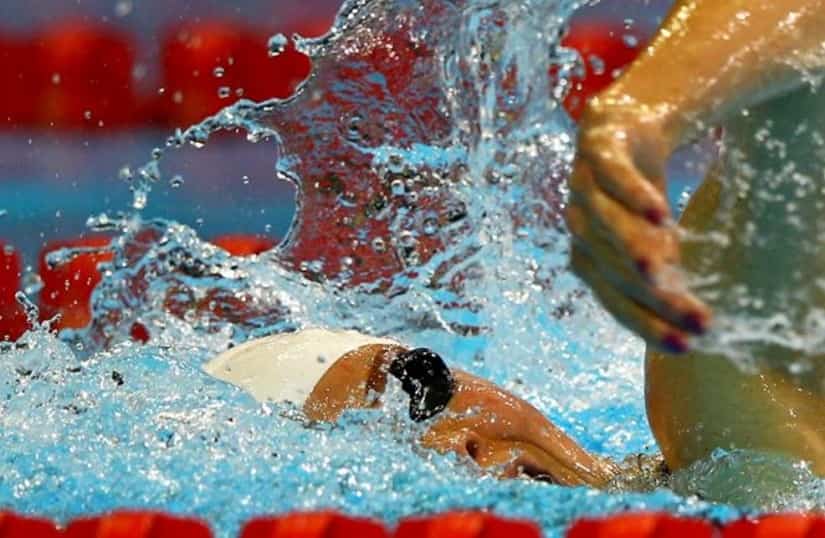 Wanna level up your conditioning in the pool? Unleash some early season distance work with this practice courtesy of Ray Benecki, head coach of the FISH and two-time Olympian Kate Ziegler’s former coach.

Ready to put your competitive face on?

This practice will ask a lot of you: there is fast swimming on short rest, power work with swim paddles, lots of freestyle drill work, and some short rest, high intensity butterfly reps at the end of the practice.

“We do as much long course swimming as we can at the start of the season.  It is outdoors, in a heated pool, and the swimmers love waiting as long as possible to start having to swim indoors,” says Ray Benecki, who started FISH back in 1991 and has been twice nominated as Golden Goggles Coach of the Year.

The set that he sent over was done recently, during the sixth week of their season when the swimmers are starting to get a grip on conditioning and speed.

The swimmers are in (surprisingly) good shape,” he notes. “They are starting to swim faster, and we can start laying out some practice goals for them.”

Benecki is no stranger when it comes to helping swimmers excel at distance work–he was Kate Ziegler‘s coach for nearly a decade. Ziegler would go to two Olympics (2008 and 2012), and broke legendary American distance ace Janet Evans‘ 1500m freestyle world record in 2007. While this is not a practice that Kate ever did, it has evolved over the years to what it is now.

He also served on the coaching staff of the 2008 US Olympic Team, the World Championships staff in March 2007, and was an assistant open water coach for the US squad that went to Pan Pacs in 2006.

Quality Fun with the FISH

Here is the 8,600m morning swim practice that his athletes at FISH did last week:

To finish the workout Benecki likes to drop a butterfly set on his athletes in order to challenge their toughness:

As many rounds as possible:

A special thank you to Coach Benecki for taking the time to put this workout together and share it with us. You can stay up to date with Ray and the FISH by following them on Twitter or on Instagram.

Phelps vs. Hackett: Two Freestyle Greats Go At It In Practice. For a week during the zenith of both swimmers’ careers they went toe-to-toe in training. Here is what happened.

Cam McEvoy: The Hardest Sets I’ve Ever Done. Australian Cam McEvoy is the fastest man in a textile in the 100m freestyle in history. Here are some of the most challenging sets he has ever done in training.