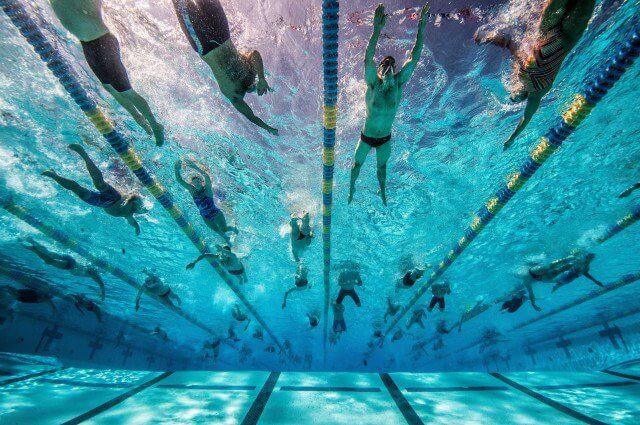 What does a legendary basketball coach from the 1960’s have to do with your swimming? Well, let me tell you.

John Wooden is one of the most revered coaches in the history of sport.

During his time coaching the UCLA Bruins he won ten NCAA national championships within the span of 12 years. Outside of also winning 7 of those titles consecutively (no team or coach has since won more than two in a row), having four perfect seasons, his team also at one point won a record 88 straight games.

He was beloved by his players, including NBA Hall of Famers Kareem Abdul-Jabbar and Bill Walton, with the “Wizard of Westwood” remaining close with many of them until his death in 2010.

Here are 7 life lessons swimmers can take from one of the greatest coaches of all time:

“It is amazing how much can be accomplished if no one cares who gets the credit.”

Although swimming is largely competed at an individual level, we train within a collective. When we are supportive and encouraging of the goals of the athletes we train with we help to foster a culture of excellence.

One swimmer trying to accomplish great things is powerful. But the wake that is created by a group of athletes all chasing a common goal is nearly unstoppable.

At the beginning of each season Coach Wooden would sit his players down and instruct them on how to properly put on their socks and shoes.

Newcomers unfamiliar to this would be forgiven for being thrown into shock. Here was the top basketball program in the country, some of the very best players in the nation, being instructed on how to correctly put on a pair of shoes?

Long before you master the intricacies of the playbook Wooden had you start at the very beginning.

The same can be applied to your swimming goals. When you execute the basics correctly, and build a foundation with proper fundamentals, everything else falls into place.

“Don’t let what you don’t have interfere with what you can do.”

There will always be someone who has a better set-up than you. A better coach. Nicer facility. Better access to services.

And there will always be someone who has it far worse than you. A bad coach. A 15-yard pool. No access.

Don’t allow your current circumstances be the defining thing of whether or not you take action today. Don’t allow your environment to be the decider when it comes to developing killer training habits in the pool, or having a positive attitude.

Make the most of what you have, for it is usually more than enough.

There are many memories that I carry from my age group swimming days. The most potent ones?

Where an older swimmer reached out to help me with a technique correction. Or when the swimmer I looked up to most on the team was leading the cheers for my race.

These things matter, and they create more impact than you can imagine.

Spend time working with the youngsters on your team. Share your knowledge and experience of the sport. You might not think it’s a big deal, but to the kiddos it’s a huge deal.

It’s tempting to think that we will figure it all out on race day. But the way we swim in competition is a direct reflection of how we train every single day in practice.

“Players with fight never lose a game, they just run out of time.”

Is there anything more disheartening than watching a swimmer give up in a race? Their shoulders sag, they roll from side to side from breaths, hand entry goes from precision strike to a hand slapping the water.

Whether they give up on the final lap of a race, or the final rep of a tough set (or earlier),

Giving up is a habit, and not a good one.

7. FOCUS ON THE POSITIVE.

“If we magnified blessing as much as we magnify disappointments, we’d be much happier.”

Our brains are hardwired to focus on the negative. It’s a survival instinct—“Hey look at that sabre toothed tiger hanging out in the bushes over there!”—that has served us well. But the modern man or woman continues to experience the pull of fear even though there isn’t a 500-pound jungle cat hiding around the corner.

Which means that we have to go out of our way to be grateful for the things that we have. Keeping a nightly gratitude list has been shown to help you feel more positive and optimistic, and can also help you fall asleep better at night.

There is lots to be positive and optimistic about. It’s simply up to you to seek it out.