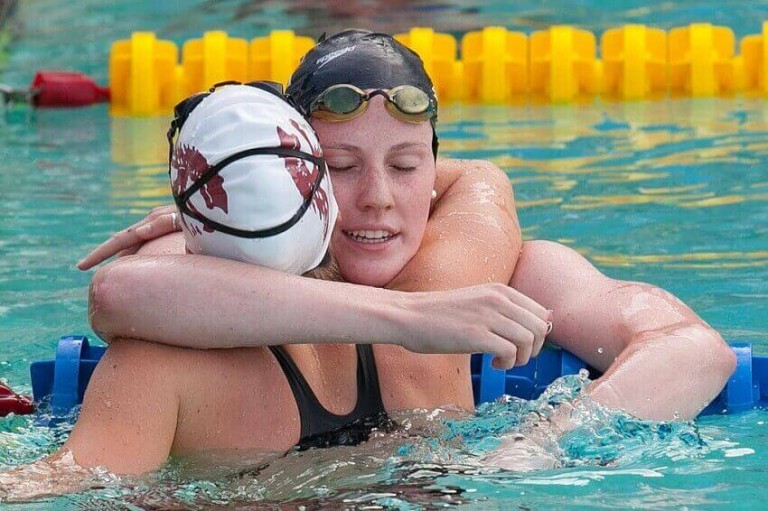 And it’s not just all the glorious health benefits of swimming.

Although there are plenty of those.

Swimming, and sport in general, provide a proving ground for some of the most fundamental and critical things that you will carry with you for the rest of your life.

Whether in your career, in personal relationships, or even different sports, swimming will teach you the importance of hard work, of being humble, and of being a team player.

Here are 7 things swimming will teach you about life:

1. You have to work hard for the things you want.

Nothing worth having in the pool or in life comes without effort. (Despite what I am about to tell you in the next point.) Accomplishing cool stuff will always require giving what sometimes may seem like unnatural levels of effort.

Make working hard your talent and you will never go without success in the pool and in life.

You know the swimmer—shows up to practice once or twice a week, but because they have been gifted with plates for hands and the height and gangliness of an LA Laker they still crush you anytime you step up on the blocks.

In the long run a work ethic will always take you more places than natural talent and physical gifts without effort. Always.

It’s just hard to remember that when you are getting destroyed by two body lengths in a 50 by the guy who never goes to practice.

3. You learn how to cope with failure and setbacks.

It’s not always going to be fair. And things won’t always go our way.

There will be times where no matter how hard we work the results don’t match our effort in practice. Or there will moments where you get flustered as you get up on the blocks and totally choke.

These moments sting, they hurt, and they take us down a peg.

But they also teach you how to be mentally tough. To overcome. And to be humble.

4. Being a team makes everyone better (including you).

Ever wonder why so many swimmers seem to have superhuman speed when it comes to relay legs?

I’ve seen it so many times, from my own swimming, dropping nearly a second on my best 50m freestyle best time, to Jason Lezak and his otherworldly 46.0 at the Beijing Olympics—there is something that happens when you race for something besides just yourself.

I get the temptation to want to do it on your own. To be able to say that you did it with no help. But when you can corral the effort and the will of the group for a common goal incredible things start to happen.

Somewhere along the way swimming will teach you a profoundly important lesson. And that is that wanting something is not the same thing as accomplishing something.

In order to be successful, in order to crush that personal best time you have to do more than just dream endlessly about it. More than writing it out. And more than telling people about it.

You need to adopt the daily routines and habits that will get you there. You must, in other words, learn to love the process of becoming the swimmer you want to be.

6. You learn to discipline yourself.

As you progress through your swimming career you will learn to become more reliant on your own devices to stay on top of your training.

For some the moment they turn 16 and get a driver’s license is a breaking point—gone is the forced wake-up call in the morning from the parents. (Or the cold glass of water over-the-head my old man got me with a couple times.)

This is when discipline really rises to the surface, the moment where it’s just you and that alarm clock. Where the tug of the warmth of the sheets conflicts with the goals and commitment you have made for yourself.

Conquering that alarm clock is tough, and once you do it, everything else that comes your way will seem easy in comparison.

7. How you lose is as important as how you win.

Winning is great, and losing stinks. We can both agree to that. But I believe that how we do both matters more than the outcome.

You will lose many times over the course of your swimming career. You don’t have to like it, but being able to lean across the lane line and shake the winner’s hand means that even though you didn’t conquer the competition you conquered yourself.

Similarly, there will be triumphs and highs during your time in the pool. Being a champion is more than just being the first swimmer to the wall—it’s being humble in victory, congratulatory to others, and setting an example for those to come.