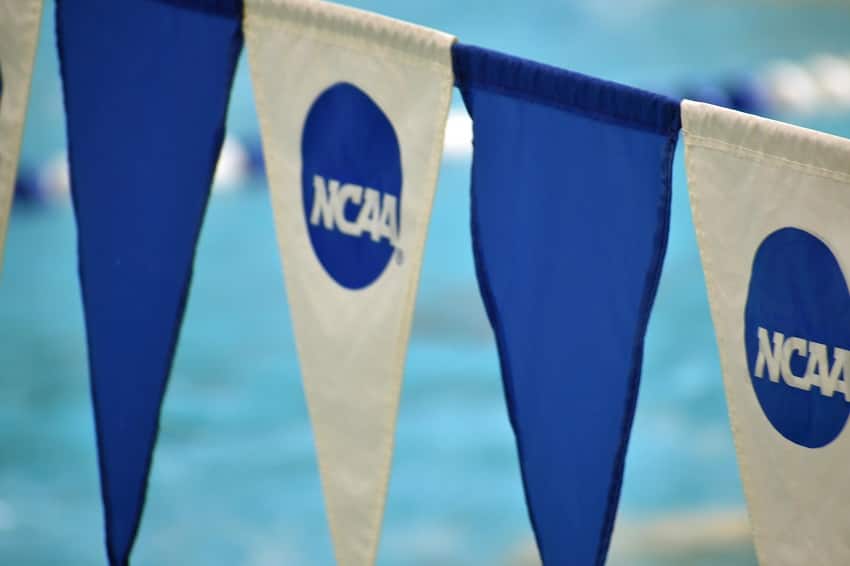 Recently we partnered up with four NCAA swim teams to get under the swim cap of collegiate swimmers.

More specifically, we wanted to see how they would rate themselves in terms of mental preparation, use of mental skills, and how they mentally approach the adversity and challenges common in the pursuit of chlorinated glory in the pool.

The questionnaire was sent to four elite university swim teams in the United States. All four teams were top tier teams in their divisions, two of the teams competing in Division I, the other two in Division II.

Let’s dive right in to the results.

Pre-race anxiety and the stress of competition is real.

Anxiety, nerves and butterflies are all a part of the competitive experience. How swimmers frame those emotions and feelings before a big race play a big role in how they end up performing.

How do college swimmers report feeling when they are dealing with the threat of competition? 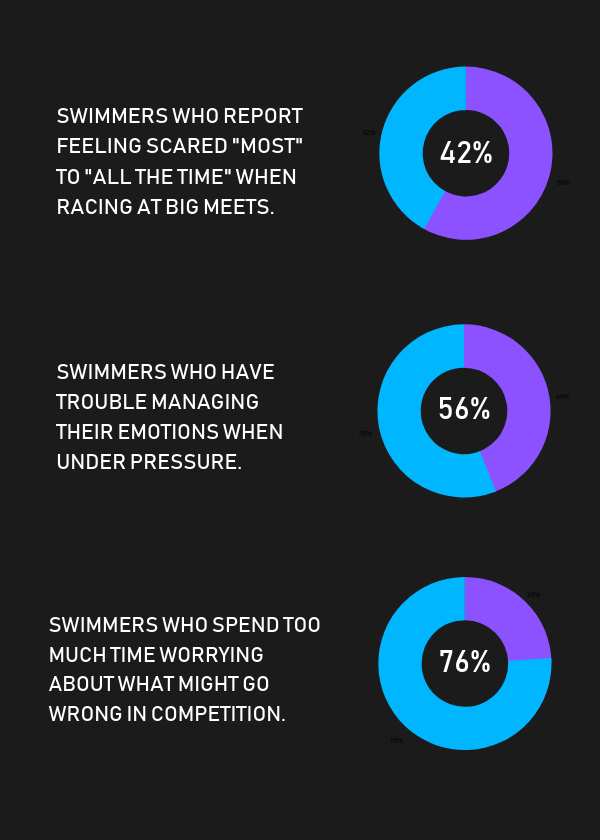 Some of the reasons cited for feeling scared before competition included disappointing the team, not living up to expectations, and even losing their place on the team and potentially their scholarship.

Key Takeaway: Swimmers should place a greater emphasis on a process-based mindset and framing anxiety as excitement in order to swim their best on race day.

College swimmers tend to have specific goals, but aren’t as clear about what they need to do on a daily basis to be successful.

Swimmers, and athletes in general, typically have specific goals for what they want to do in competition.

Research has shown that writing out and being accountable to your goals significantly promotes the likelihood of them coming to pass.

Michael Phelps was a voracious goal setter, Katie Ledecky wrote out her goal times for Rio on her pull buoy, and Caeleb Dressel has very specific goals in mind for his swimming.

An overwhelming majority of the college swimmers we surveyed had specific goals for the season. Most also had a generalized idea of what they would need to do to achieve those goals.

But where things really took a turn was the day to day focus on their goals—less than 30-percent of the swimmers had clear and specific things to work on each day at the pool in service of their goals.

While the second two parts look the same, it’s the difference between knowing that you need to go to practice and what you are going to do at practice. 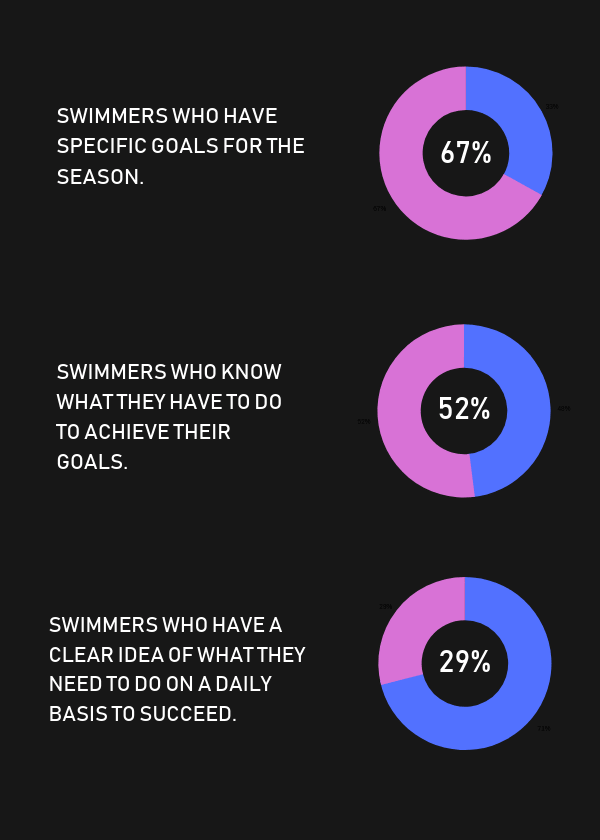 Key Takeaway: Most swimmers have clear goals and a general idea of what they need to do to achieve them, but not the day to day process to make their goals happen.

With such a large part of the sport being mental, it’s no surprise that collegiate swimmers frequently report using mental skills such as goal setting, visualization and self-talk to sharpen their performances.

Instructional and motivational self-talk has been shown to increase performance over a ten-week period with age group swimmers.

Visualization is another commonly used mental skill employed by high level swimmers, with Olympians such as Cody Miller and Adam Peaty using the practice to prepare themselves for competition. Michael Phelps was also well known for using visualization to give him an edge under pressure.

A majority of the swimmers surveyed used one or more mental skills to help them swim better. 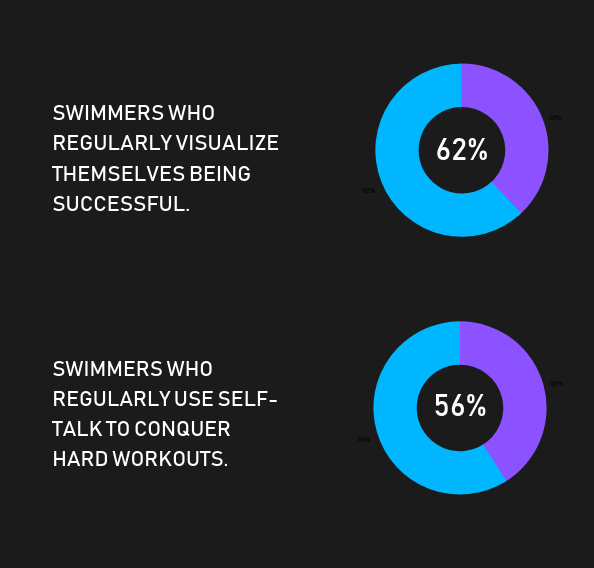 Key Takeaway: Managing self-talk and using visualization are two proven ways to boost performance. While a majority of college swimmers practice them, there is a significant portion who do not, opening up a window of opportunity for up-and-coming swimmers.

College swimmers use comparison-making both to their advantage and their detriment.

The sport is measured in times, points scored, and rankings. Which means it’s fairly natural that swimmers are going to compare themselves to one another.

How this motivates swimmers depends on the situation. 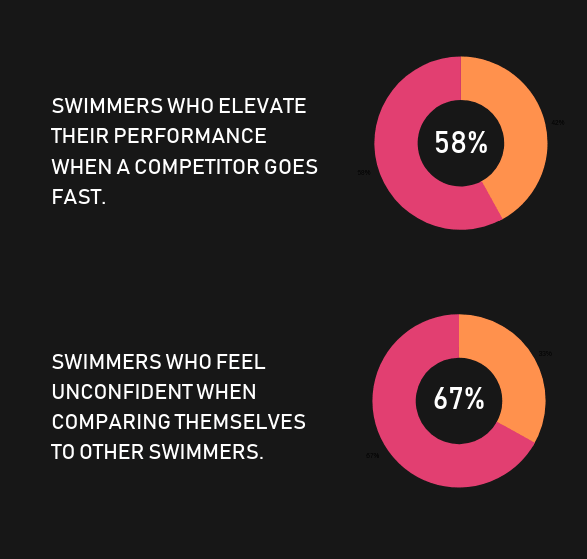 Key Takeaway: While competition will always be a part of the sport, the way that comparisons are made influence how well a swimmer performs. If comparing yourself to other swimmers motivates you, use it. If not, don’t.

There were some revealing insights in this case study. I learned a lot from these swimmers, and I hope you did too.

What is the biggest takeaway you got from what you read?

Does reading this case study reinforce that you need to be more process-focused on a daily basis? Or that there is a gaping opportunity to out-perform your peers by working on your mental skills?

Let me know by reaching out anytime on Twitter, or emailing me via my weekly newsletter (it’s free, and I will send you motivational goodness twice a week).