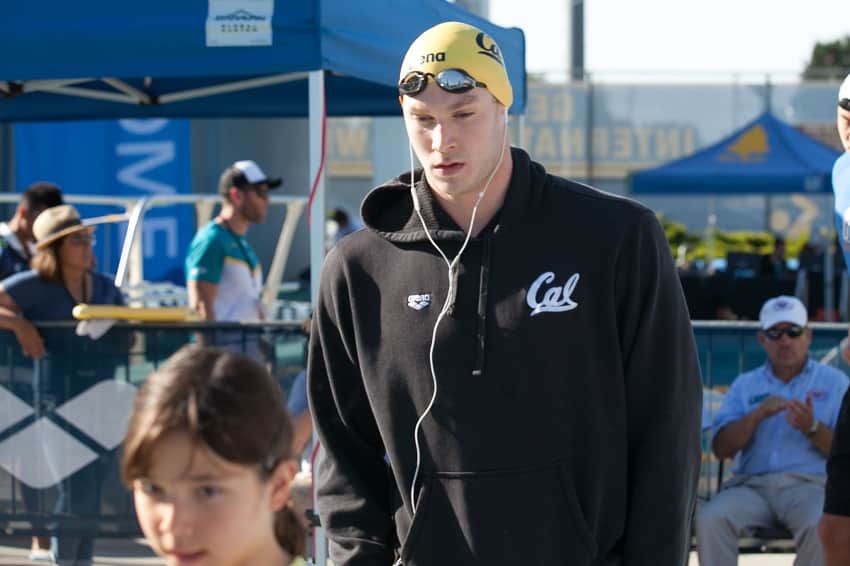 It’s no secret that I am a little obsessed with the process.

The process is the fins to my paddles.

The backstroke flags to my lane ropes.

The cap to my goggles.

Think you know what I’m saying.

The best swimmers on the planet focus on the process in order to get the most of themselves when it matters most.

Whether it means sticking to their race plan, focusing on their technique, or concentrating on the things they control, here are three examples of elite swimmers crushing the process.

Let’s get into this.

Focusing on the Results is Stressful

When you step onto the pool deck, whether it’s for swim practice or for competition (when competitions happen again, of course), is your mind on executing a super-duper swim?

Swimming fast happens when we focus on the steps required to do so. When we stay present and concentrate deeply on each phase of what it takes to swim like a chlorinated gangster.

Our times and confidence crash when we go to Stressytown on the results, how we swam in the last session, the times other swimmers are putting up, and so on.

Think of it this way…

You don’t swim a 400-meter individual medley by swimming the last 15m of the race first.

You swim a fast 400 by nailing your start, emerging from your breakout like a nuclear sub crashing through a sheet of ice, streamlining like a missile, pacing the first 50 properly, and so on.

Here are some examples from some of the best swimmers on the planet on what having a process-based skillset can do for you and your swimming. 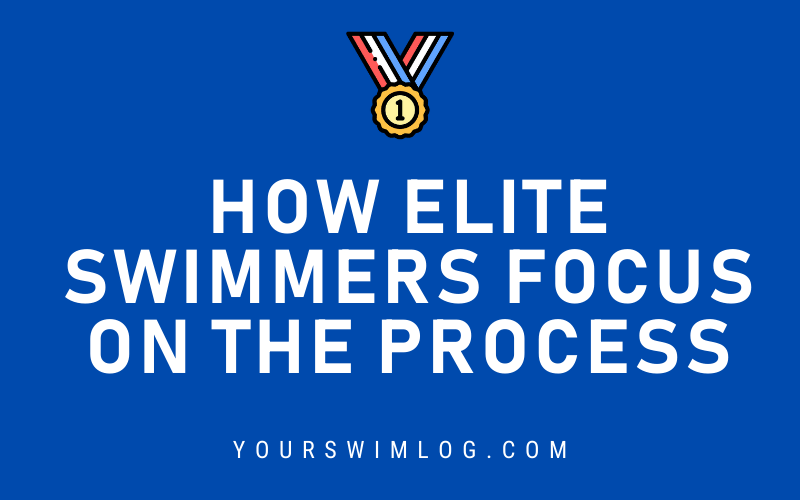 Russia’s Alex Popov is the greatest freestyle sprinter in history. The guy dominated the 50m and 100m freestyles for the better part of a decade, winning back-to-back Olympic gold medals in both events.

He also had an absurdly efficient stroke (taking just 31 strokes to swim the 50 in 21.6… in briefs, no cap, and from a grab-start).

Popov was an absolute assassin behind the blocks.

This came from a whole lot of detailed practice, for sure, but once he was in the water his focus was on himself, his process, not that of his competitors, or what the result might be. 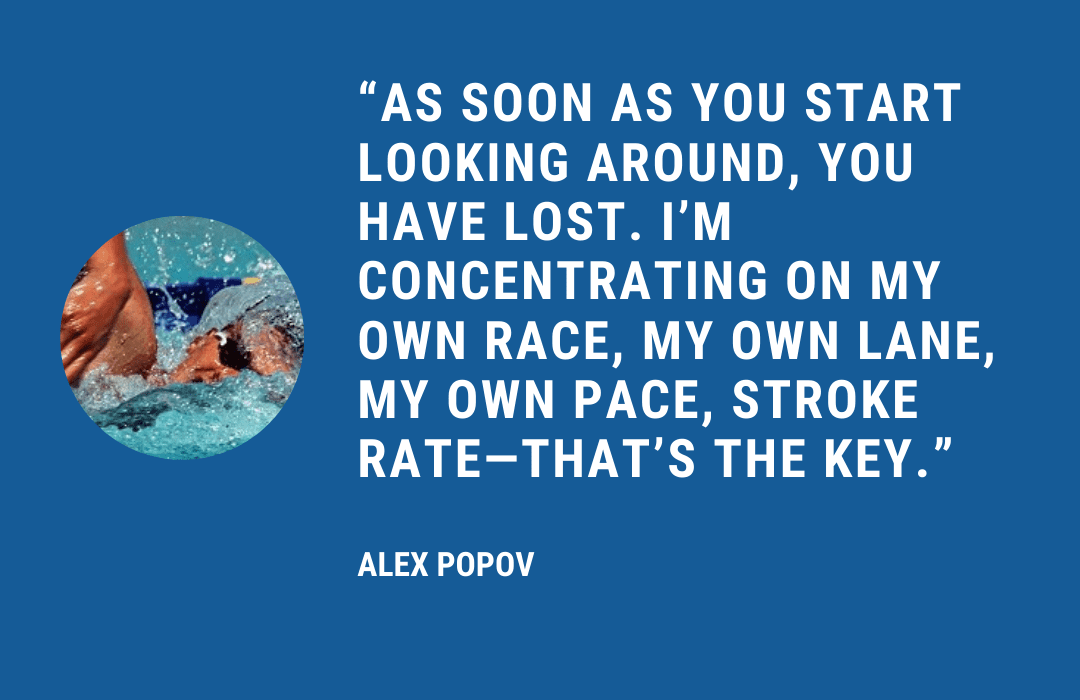 Ryan Murphy, triple Olympic gold medalist from Rio, has the same mentality when he is racing.

He knows he can’t control what other swimmers are doing. He can’t completely control the outcome.

But he can focus on his process—how hard he kicks off the wall, how much energy he uses on the first lap, what kind of warm-up he does before racing.

“Once I get twenty seconds before a race, what can you do? Your body, your conditioning, that’s not going to change. The only thing you can do is taking what you got and maximizing it in that moment.”

Murphy credits his best swims to his ability to stay locked into himself and his process:

“When I’ve had my best performances it’s when I’m really just locked into the race plan and nothing’s going to distract me from that.”

Let’s throw down on another example, again from Brett Hawke’s podcast, but this time, with Australian freestyle legend Ian Thorpe.

On the opening night of the Sydney Olympics in 2000, Thorpe had the weight of a nation on his shoulders. His first race was the 400-meter freestyle. He was the standing world record holder and complete and utter favorite to win gold.

He was also expected to do this in front of a hometown crowd of thousands of Aussies (who get fired up about swimming as much as anyone you will ever meet).

Not long after, the same evening, Thorpe anchored the 4x100m freestyle relay.

The relay was a heavyweight fight for the ages.

The American men had not lost since the 4×100 free relay had been first held, 36 years earlier.

Gary Hall Jr., the shadow-boxing American sprint stud, fanned the flames of interest and rivalry by predicting that the Americans would trounce the Australians:

“My biased opinion says that we will smash them like guitars.”

The media ran wild with the quote, setting up a highly-anticipated showdown.

(Hall was far more effusive of the Australians later in the quote, something that was lost in the rush to hype the rivalry, noting that “it won’t be so easy for the United States to dominate the waters this time.”)

People were jacked up for this race.

A metric ton of national pride was on the line.

Ian Thorpe and Gary Hall Jr. both anchored their respective teams. When both swimmers dove in, Thorpe had a slight lead.

But Hall’s speed hurtled him out to a half-body length at 350m.

Thorpe charged back, his massive rooster-tail of a kick pushing him closer and closer.

With fifteen meters to go, Thorpe had drawn even with Hall.

“My body at this stage is exploding,” said Thorpe.

He was experiencing the familiar cement legs and folding shoulders from peak exertion.

Instead of panicking, or fixating on how exhausted he was, or how close the race was, he concentrated on his technique.

He put all his attention on what he could do at that moment to swim his best.

“I went into technique, I didn’t think of the outcome,” Thorpe said. “I emphasized how long my stroke was so that I didn’t tighten up during the last part [of the race].”

And another world record that night for the 17-year Thorpe.

“You can’t control the outcome of a race,” said Thorpe. “What you do have control over is what you do in the race. Getting into those technical parts, that helps. You go into the moment instead of where you want to be and you increase the likelihood of the outcome that you want.”

Sounds cool and all.

But where to start with a process that is most likely to donkey-kick your personal best times?

Grab a sheet of paper and write out the things you can control when it comes to your swimming.

In another column, write out the things you don’t 100% control:

You will find that the things in the “stuff I don’t control” pile are the exact things that cause a lot of unnecessary stress and anxiety.

And, you guessed it…

They cause us anxiety precisely because we don’t control them!

Understand where your focus and attention is going in big moments, whether it’s a threshold set in practice or in those quiet seconds on the block in competition.

Second, write out a quick list of 3-5 things that you can do each day in service of your goals.

Pick 3-5 measurable and simple (not necessarily easy) steps to your process.

The only things in this list are things you control.

Be realistic about this list and avoid the urge to overdo it with a list of 37 things.

If you are having difficulty sticking to the process after a week or so, either dial it down to make a smidge easier or be honest with yourself if your process strictly includes things you control.

In summing up this post, here’s another fun quote from Aaron Piersol, another Olympic champion…

“Success means having engaged in the process correctly. Understanding how the rhythm of life works, and not taking shortcuts.”

The Process is What Shapes You as a Swimmer. The results and medals aren’t a summary of your journey in the water. It’s the process that shapes you.

Why You Should Be Focused on Competing With Yourself. Swimming faster than you ever have before isn’t about the swimmer in the next lane. It starts with going head to head with the toughest competition of all–you.