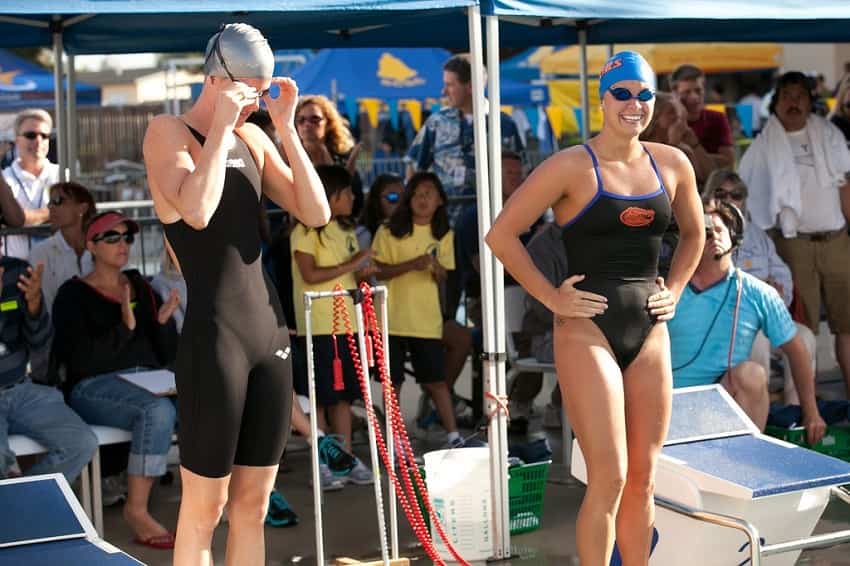 Elite swimmers aren’t just talented and fast, but they are also the best at keeping themselves motivated and focused during training. Here are some of the greats on how to level up your motivation.

Mental toughness, visualization, self-talk, focusing on the process—there are lots of tools that high-level swimmers use to get the most of themselves in the water at practice and on race day.

The career of an elite swimmer takes time to fully blossom, and in order to carry through the years required to get to that top level, they develop and maintain ways to sustain motivation and focus. Talent in the water is one thing, but having the ability to stay motivated for season after season is another.

Whether it’s staying present and not getting overwhelmed, mentally flushing bad workouts, or not taking failure in practice too seriously, here are some of the fastest swimmers in the world on how to stay motivated.

For the elite-minded athlete, it might seem like the proper thing to do to obsess and stress over a bad session at the pool. We all have them, from age grouper to fastest swimmers on the planet. One of the strategies to learn and move on from them is to quickly write them out so that you get them out of your head.

Olympic gold medalist, world champion and NCAA legend Caeleb Dressel has always been known for writing out his swim practices, using his log book to write out not only the sets, but how he wants his body to feel in the water. He writes out the great workouts, the good ones, and even the bad ones.

“The practice logs help as well, once I put pen to paper, write down the practice and my thoughts, it helps me to get rid of it,” Dressel says.

Like the rest of us, Dressel isn’t keen on the swim practices and sets where he could have performed better. Writing out the workout helps him flush it so that he can relax away from the pool and come back hungry for the next session.

“If I have a bad practice, it is hard for me to unwind from that,” said Dressel. “Because I don’t like having bad practices… If I put to pen and paper it helps me get rid of it so that I can move on.”

Natalie Coughlin: Be present when you are at the pool.

How focused are you when you go to swim practice? Do you use daydreaming as a way to distract yourself from the pain and exhaustion from the main set?

Natalie Coughlin, 12-time Olympic medalist, attributed her ability to focus during practice as her greatest weapon.

Being present and engaged in the pool will actually make the time go by faster, you will produce more intrinsic motivation from your efforts, and perhaps most importantly, you will improve faster.

Laszlo Cseh: Use the competition as motivation.

When you surf the tubes of the internet and see insane times being posted by other swimmers your age, does it motivate or discourage you? The bear trap that is “I will never be able to do that, so what’s the point?” is real.

Hungary’s Laszlo Cseh, one of the most versatile and accomplished swimmers on the planet, rose to the top of the scene at the same time as Michael Phelps’ golden Olympic reign. Cseh, who has four individual Olympic silver medals to his name, used the race video of Phelps’ 200m butterfly from Beijing as motivation. Cseh used the rivalry and comparison-making to motivate his efforts in practice.

“Sometimes when I go to training in the morning and I get tired or I want to sleep more and I feel I need some boost, I watch it,” said Cseh. “I watch it a lot of times.”

Instead, take the epic performances of other swimmers as reminders that it’s possible.

The new swimmer you become on the other side of this passing suffering is permanent.

And if you enjoy this relentless pursuit for improvement, if you enjoy what you are doing, well, you are going to work harder. It’s about as simple as that.

When asked about how Sarah Sjostrom, a sprint dynamo who has broken world records in the 50, 100m fly, and the 50, 100 and 200m freestyles, stays motivated during training, her answer was simple.

“I just enjoy being an athlete. Then it’s no problem to stay motivated and keep improving myself,” she said.

Katie Ledecky: Redefine failure as a stepping stone, not a stop sign.

Sounds kind of weird to write this, but Katie Ledecky fails in practice.

That sentence might sound silly given how successful she has been over the past few years. But when she goes to the pool she is chasing race pace targets that are just outside of her ability. She wants to improve, and she understands that in order to do so, she is going to need to fail.

Failures in practice better inform what comes next. They are fuel for renewed effort. Failing like this is not easy, especially with the “perfect conditions” athlete who finds the idea of any kind of failure to be demoralizing. But the reward on the other side is pretty apparent.

Her coach at NCAP, Bruce Gemmell, helped guide Ledecky to her monster performance in Rio.

“There are days she fails catastrophically,” he said. “She fails in practice more than anybody in her [training] group, because she’ll start out like, ‘This is the pace I need to swim in the race, so I need to replicate it in practice.’ And she’ll go six repeats like that, and the tank goes empty and she just falls off. But you know what? She’ll come back the next day and try it again. And on the third day, she’ll nail it. And she’s been doing this since the first day I walked on the deck with her.”

Jessica Hardy: Slow things down when you find yourself getting frustrated.

Be present and engaged with what you are doing in the water. When things get tough, our tendency is to get tough and just try to bulldoze our way through it. Instead, slow things down mentally.

Jessica Hardy, who has won nearly 30 medals in international competition, finds that she is sharper and faster when she slows things down and tries to get back into the moment.

“When taking the advice to slow down, I find that I do a better job at the task that I am doing and have more fun doing it,” says Hardy.

We tend to view success in the water as a big overnight thing, where our preparation suddenly came together in an instant and produced this wildly successful swimmer. Not so.

“People don’t know how ordinary success is,” she said.

Does she mean it is easy? No, of course not. But it’s simpler than we build it up to be.

At the age of 14, Meagher decided that she would become a world record holder. She did two big things to propel herself to that standard over the following year: showed up to practice on time every day and performed every turn to the max of her ability.

These seemingly dull standards had a cascading series of side-effects, and Meagher improved to the point where within two years she would swim a time of 2:05.97 in the 200m butterfly, a world record that would stand for nearly twenty years.