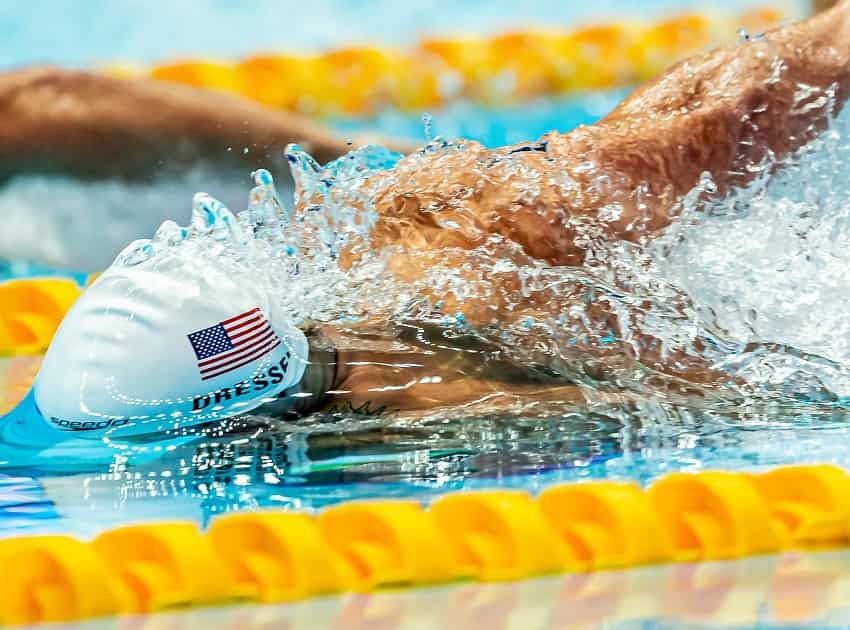 Visualization is a proven weapon for more confidence and faster swimming.

Plenty of Olympic swim champions, past and present, use mental imagery to build confidence, decrease anxiety, and solidify their preparation for moments of peak pressure.

You close your eyes, press play, and imagine that PB-crushing swim. Everything comes into focus: The coldness of the water, your toes curling around the edge of the starting block, the swirl of nerves in your belly.

Most often, visualization is used as a way to prepare for competition. You imagine the nerves, the cold pool deck under your feet, the goosebumps as your name is announced. These rehearsals, which are effective because they closely mimic the real thing, help you defang the uncertainty and pressure of competition.

In this post, you are going to learn about another way you can use visualization to improve your swimming.

Tag-team your visualization with observation

Monkey see, monkey do is something we learn early. We mimic the behaviors and attitudes of those around us.

Our parents have all scolded at us at one point with a variation of, “If little Johnny is going to jump off a bridge, are you going to as well?”

This childhood concept applies to watching our heroes in the sport, too.

We observe how a fast swimmer does things, and we internalize it for our own benefit.

As a kid, I watched Matt Biondi’s smooth, soaring freestyle and imagined myself swimming with that same smoothness. Going to the pool, I’d imitate the slight gallop, the relaxed shoulders, the quiet hand entry.

Same with Aussie distance king Kieren Perkins. I tape recorded his world-breaking 1500m freestyle at the 1994 Commonwealth Games and watched it over and over, nearly putting the family VCR out of commission. At practice I imagined myself as Perkins, steam-rolling towards a new world best.

This combination of observing something (high-performance swimming) and imagery (visualizing ourselves swimming with that same type of bossishness), is more powerful than you might think.

A Hybrid Form of Visualization

Researchers took a group of university students who had never tried mental imagery and had no experience at throwing darts. After giving the students some tips on dart-throwing, the researchers established a baseline by having each participant throw thirty times.

The students were then split up into five different groups.

After six weeks of practice, the students were all tested again.

The findings reinforce the power of visualization for improving performance, even when there isn’t any actual physical practice happening.

But things get even better when you tag observation with imagery.

Taking the next step with your swimming (and visualization)

Watching elite swimmers do their thing is not only a great way to help develop your skills in the water, but it’s also a classic motivational technique.

Who can watch Jason Lezak’s relay leg in Beijing, or Caeleb Dressel cracking :18 in the 50-yard freestyle, and not come away feeling all the feels?

Of course, the occasional person will read this and stretch it to the extreme to make a point on social media: An age group swimmer shouldn’t try and mimic a professional swimmer!

To which I would say, yes they can.

I am not going to watch Caeleb Dressel swim 50-yards of freestyle in :17.6 a handful of times and be able do it. (As fun as that might be!)

Rather, I would go to the pool and emulate the generalities of his performance: the high elbow catch, the high body position, the tight streamline, and the epic distance per stroke.

We strive for a sense of the performance, and not necessarily mimicking the exact technical details that the swimmer is performing.

When you head to the pool, work on swimming with that same fluidity, smoothness, and flat-out awesomeness that your heroes swim with.

I’ve written a fair amount on the power of visualization here on the blog, as well as in my mental training workbook for swimmers, Conquer the Pool: The Swimmer’s Ultimate Guide for a High-Performance Mindset.

Here are some more resources and guides on using mental imagery to boost performance in the water:

How Swimmers Can Get Started with Visualization and Imagery. Tips and steps for getting started with your own mental imagery practice.

7 Olympic Swimmers Who Use Visualization. Some of your favorite swimmers and Olympic champions use visualization. Here are some of the ways they use it to prepare for battle.

How Michael Phelps Used Visualization to Stay Calm Under Pressure. The GOAT started using visualization at a young age to calm his mind and prepare for all the eventualities of competition.

How to Prepare for the Moments in the Pool When Things *Really* Hurt. A great way to use visualization is to target moments of peak adversity and struggle in the water.