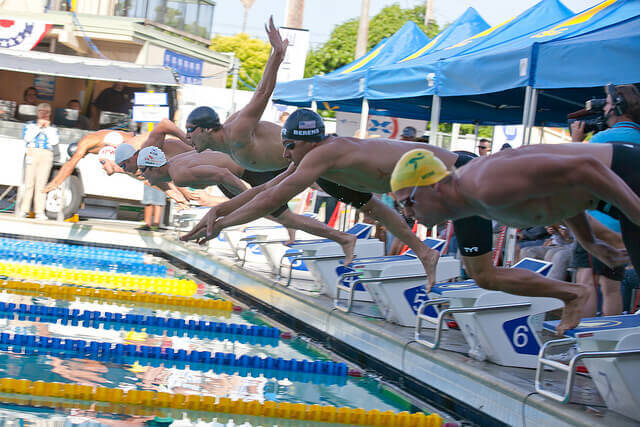 The local swim meet can be a deafening beehive of activity.

With sometimes upwards of a thousand swimmers milling about, bouncing with the full-tank type of energy that comes from being tapered, it can be a little bit of a frenzy.

The roar of the crowd, the thunderous swimming in the pool and the train-whistles that coaches from both sides of the deck unleash towards their swimmers can make it hard to notice much else but what is happening in the water.

But if you stop for long enough, you will almost certainly overhear one of the following: 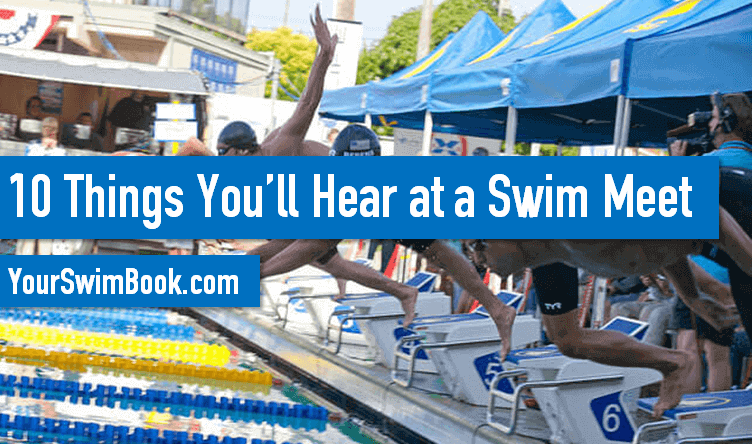 1. “Would so-and-so please report to the marshaling area?”

Swim meets are a cacophony of excitement. Between the roar of the crowds, seeing friends you haven’t seen for a while, or succumbing to a swimmer nap mid-session, it can be easy to see how some swimmers can lose track of time.

My particular weakness was playing basketball between events. At the Mel Zajac Jr. meet especially there would be a session long game of Bump going on at the outdoor hoop by the warm-down pool. It was a steady rotation of swimmers coming out of their races and playing until the last possible moment before having to go up for their next race.

It’s hard to not to get neurotic about missing your race when you consider all of that hard work and training you have put into swimming fast. (Not too mention the shaving, or for the ladies, not shaving for so long.)

Some swimmers will guesstimate how much time they have until they race by hedging on teammates swimming a couple heats before them. When they see said teammates go up they know it is time to get prepped to swim.

Often said with a variable amount of panic, when you hear a swimmer say this it is safe to assume that their back has stiffened, eyes widened, with hands grasping tightly on their cap and goggles.

Bonus points if they ask this question—while standing below, near, or within grasping distance of the scoreboard displaying the event, heat, previous heat’s times, meet sponsor, and more.

4. “We have a disqualification in the last heat.”

Perhaps you hoped that the official didn’t notice your sloppy two hand touch. Or the 16 underwater fly kicks in your breaststroke pullout. Or the fact that you were already breaking out off your dive when the starter’s pistol went off.

Either way, you hoped that by sneaking out the side of the pool quickly, and making a bee-line to the locker room before the official could break the bad news to your face that it would somehow wouldn’t count.

5. “We need one more timer before we can start.”

There are so many cogs in the wheel that makes a swim meet go around.

You have a couple officials in the timers booth working an electronic system that looks like it could launch a shuttle into space. A series of volunteers officiating from all angles of the pool.

And yet, this all comes to a grinding halt when that one timer doesn’t show.

It’s at this precise moment that the non-swimming brother or sister in the stands is volunteered (conscripted) into service.

The kaleidoscope of cheers, whistles, and outright screaming that takes place during a hotly contested race can be difficult to pierce for even the most accomplished whistle-blaster.

When swimmers have each one another’s backs at race time they need to make sure that their teammate knows they were cheering for them (otherwise it doesn’t count!). As a swimmer themselves, they should realize that while the noise is appreciated, it’s pretty hard to make out much.

It’s always an interesting experience in the warm down pool after a race where multiple heats worth of swimmers are all angling for the same few spots in finals.

Swimmers from opposing teams who have never spoken will suddenly think nothing of asking their competitors what they went.

Swimming is just as much a sport of gamesmanship as any other.Often times it comes not to the swimmer is best prepared physically, but the one who has better mastered the psychological aspect to the sport.

From the antics in the ready room, to the attempts at psyching out the competition behind the blocks, swimmers are always looking for an edge up, even if that edge is simply knowing how prepared the competition is.

Want to see a swimmer squirm?

Put them in one of their off events.

Doesn’t matter if it’s a sprinter doing a distance event, or a distance swimmer doing a sprint event (not so bad this way around), but there are often moments of confusion when a swimmer sees that they have been enlisted, err, entered into an event they a) haven’t ever raced before, or b) are doubtful they can complete it.

Whether it is a 200 fly, 400IM or the mile, swimmers doing an off event under the guise of coach trying to instill some mental toughness will issue their doubts when their 200 flyer teammate gives them a perplexed “what are you doing here?” look behind the blocks.

The only two words any swimmer really wants to hear.

While the reward of having a good swim is satisfaction enough, it is always great to hear these words, whether they are from your coach, teammates, or even just your non-swimming little brother who is timing.