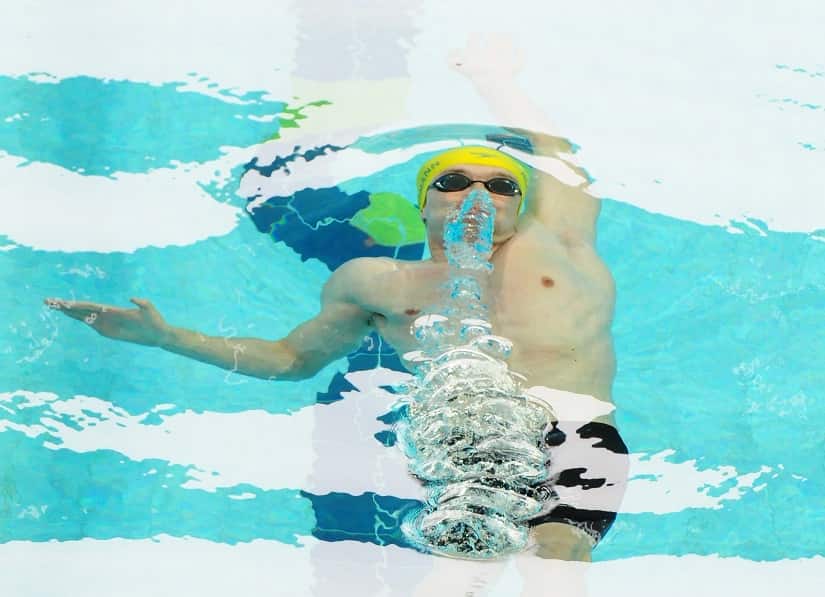 Vertical kicking is one of the best ways to develop a crazy-fast kick, improve your core strength, and become a more proficient dolphin kicker. Here are five reasons to sub in vertical kicking into your training this season.

If you know me, and you probably do, you know that I like kicking.

Whether it’s on the big, ugly tombstone kickboard at my local YMCA, doing random kick drills, or doing hour-long vertical kicking sets, I’m a fan of working the legs.

The reasons are simple: a strong kick helps you swim faster by keeping your technique from falling apart when you get tired. It powers your underwaters. And it helps keep your body position well, uh, positioned.

And while it is tempting to want to improve your kick out of the water with more dryland, more weight training and more ankle flexibility, the ugly “secret” to getting a faster kick is doing more kick.

Spending half the practice on a kick board gets to be a tad tedious, so here’s why you should be loading up your legs in the deep end with some vertical kicking:

1. It will improve your up-kick.

When we think about the motion of our kick, we focus almost exclusively on the downward phase. Intuitively, this makes sense. Any other time we are “kicking” the focus is on pushing something forward (kicking a soccer ball, for instance).

But by concentrating only on the down-kick phase you are missing out on potentially doubling the power and speed output of your kick by ignoring the up-kick, or as many swimmers treat it, the recovery phase.

When kicking vertically, it’s much easier to pay attention to the up-kick, which often feels so ignored and left out in the water. Vertical kicking teaches you to kick with equal force in both directions.

2. Your undulation will get better.

Proficient dolphin kickers make it look so easy, don’t they? We watch someone like Michael Phelps, or Caeleb Dressel, and their mastery of the movement teases us into believing that it is so easy.

And so what do we do?

Head down to the pool, jump in, push off and dolphin kick in much the same way that a salmon dies. The dolphin kick, although it’s a simple looking movement, requires a full body ripple to execute properly.

Calling it “kicking” isn’t completely accurate when you consider that your almost your whole body is helping out to create the motion.

Working the undulation is easier to get a grip on when we can keep our head above water and focus exclusively on hitting the rhythm of the movement.

3. It’s a great way to learn to kick from your core.

Vertical kicking is an awesome core exercise for swimmers. About as simple as that.

You will particularly strengthen the backside of your legs and lower back, having to work that aforementioned up-kick (basically you are doing a high number of hamstring curls).

Keep your core braced while vertical kicking. A simple way to do this is to place your finger in front of your belly button. When doing this type of kicking I like to think about bracing my belly button against my spine.

Swimmers commonly swim without their core being tight and braced, and vertical kicking is a simple way to develop better motor patterns.

One of my favorite drills to transfer your braced core into your swimming is with a vertical kick drill where you slowly pitch forward into streamline kicking, and then into full-blown swimming, all the while keeping your core tight.

4. It’s strength training for your legs.

Fins. That’s usually the first thing swimmers reach for when they want to improve the power in their kick.

While swimming fins do have a place, vertical kicking, I would argue, is better. For two reasons: you can increase load according to ability, and it more closely replicates the kick tempo you actually want.

First, load: for newbie vertical kickers, you will have your hands out in front of you, sculling. As you get better and stronger, you will eventually progress to having your hands out of the water, and eventually, in a streamline.

Like Michael Phelps was fond of doing while powering up his underwater dolphin kick, he would wear a weight belt. You could also sub in DragSox on your feet to simulate drag and weight.

Second, kick tempo. One of the main drawbacks of kicking with fins—I know, I know, swimming with fins is all the fun—is that your kick tempo goes down. Way down, in fact.

The longer the blade, the more crashy your kick tempo gets. While limited bouts of this might be good for developing power, kicking with fins for extended periods of time just promotes poor motor functions. In other words, by doing long, slow kicks with fins on, you learn to do long, slow kicks without fins on.

This is why most swim coaches will push you to use short blade fins—you can get the power development and still keep a decent kick tempo.

This is another reason vertical kicking is so awesome—you can keep tempo high while under load, making it pound for pound the best way to increase kick power in the water.

5. You can get way more kicking reps in, in a far shorter amount of time.

Vertical kicking is an efficient way to perform a metric ton of dolphin kicks in a much faster timeframe.

After all, how many dolphin kicks do you do off each wall? Two? Three? Five?

Over the course of a workout, how many dolphin kicks do you think you end up banging out in total? Let’s say that you swim 4,000m, short course, all freestyle or backstroke. That’s 160 laps or opportunities to do a push-off and subsequent series of fly kicks. If you do three dolphin kicks per wall, that’s 480 dolphin kicks.

That might sound like a lot, but if you do ten minutes straight of vertical fly kicking, at around 1.5 kicks per second, that’s 900 dolphin kicks.

You can literally almost double your daily dolphin kicking output by adding ten minutes of kick work onto your workouts. With no turns, no walls, and no swimming, you can get a lot of high-quality kicking reps in, very, very quickly.

How to Develop an Awesome Underwater Dolphin Kick. Our flagship guide that features tips and advice from Olympic champions, elite coaches, and even a space scientist.

How to Improve Your Freestyle Kick. The top athletes in the pool are not only fast swimmers, they are fast kickers. Here is your guide to a faster freestyle kick.