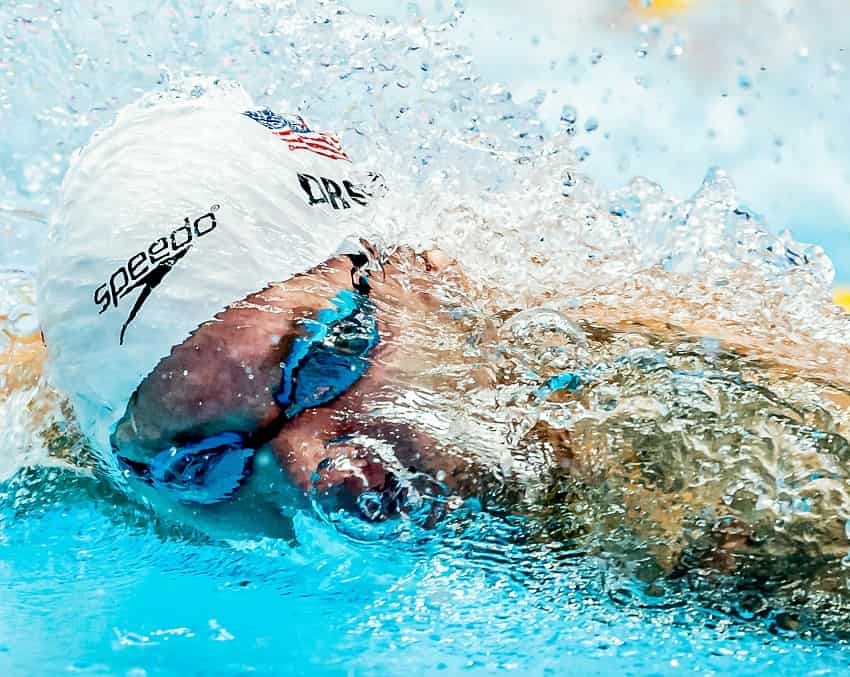 Get your freestyle on with this collection of my favorite freestyle sets and practices.

Freestyle is the most common stroke performed in training, the fastest stroke, and the one that most of us learn first.

Over three decades of swimming and coaching, I have done a metric butt-ton of freestyle sets.

Below are some of my all-time favorite freestyle swim workouts.

I included some distance-oriented swim sets, some power-focused sets, a pull-centric workout, and more. (Fair warning: I love freestyle kicking, and this is reflected in the sets.)

A couple of quick notes before we dive in:

Alrighty, let’s get after some challenging freestyle sets!

This set was done long course meters and was one of the meat-and-potato sets I used over the course of 2019. Pick an interval for the 50s where you gotta hustle to get around :10 rest, and go up the ladder of repetitions, trying to maintain speed.

As you get better at this set, make the intervals faster.

Swimmers love wearing fins and paddles, and I am no exception. This set, largely aerobic in nature, includes some bursts of speed and has you descending effort within each round.

The challenge comes in maintaining technique and nailing those underwaters as fatigue accumulates over the course of the set.

This freestyle set can easily be done without swim fins and paddles, but who doesn’t like swimming with superchargers on their hands and feet?

In the months before Covid shut down pools, I was spending a lot of my time in the water focused on making 6-beat kicking a standard feature of my swimming.

(I was inspired partly by a talk Bob Bowman gave about Michael Phelps adopting six-beat kicking as a teenager. His freestyle, according to Bowman, went ballistic soon after.)

This freestyle set mixes in some cruise kicking (with a kick-board) along with a descending freestyle swim that is to be done with a six-beat kick.

4. Power Up Your Freestyle with a Chute

One of my favorite power development tools for faster swimming is the swimmer’s parachute. Available in a few different sizes (aka resistance levels), the parachute dangles past your feet, “catching” water, creating extra resistance, and giving you the sense of swimming with a small child on your back.

Studies [1. 2] have found that training with paddles and a parachute helped create a more balanced and fluid freestyle. An additional perk of swimming with a chute is that when you remove it and swim without it, you will have an enhanced sense of speed in the water.

This set alternates doing short repetitions of freestyle swimming with a parachute (with generous rest to ensure solid effort and form) with 100s of kick and swim.

One study found that between 66 and 70 percent of propulsion in the water comes from the upper body. Which means we need strong and well-conditioned back, shoulders, and arms to get through the water.  Which further means pulling! Lots of pulling!

I’ve done plenty of different pulling sets over the years, and this one ranks among my favorites. You start off at a moderate pace, and as the distances get shorter, and you get less rest, you should push yourself to quicken the pace.

If a 1,500m main set is too short for your liking, you could always do a second round on a faster interval or add a second side to the ladder. In the example below, the interval on the way back down is :05 seconds faster to provide an added challenge:

This two-part main set is a derivative of a Bob Bowman set that Michael Phelps used over the years to improve his 100-meter butterfly, and it’s a set that I have enjoyed using to improve my freestyle stroke.

The set has you doing cruise kick (are you getting sick of all the kick stuff yet? 😊 ), choice drill, and race pace.

For the drill work, I typically alternate between closed fist freestyle (a great drill for encouraging a high elbow vertical forearm) and long dog freestyle (pulling normally but recovering completely under the water, somewhat like doggy paddle).

Those two freestyle drills are among my favorites, but choose drills that are appropriate to the technical aspects of your freestyle stroke that you would like to improve upon.

The kick reps are to be done cruise and to keep your heart rate rolling.

Train Your Ability to Sustain High-End Speed with this Set from Olympic Coach David Marsh. This set for sprinters is one of the workouts that Dave Marsh used at Auburn to turn them into a sprinting powerhouse.

40 Ultimate Practices for Swimmers. Here are 40 swim workouts for sprinters, distance swimmers, butterfliers, and IM’ers from some of the best swimmers and coaches on the planet.

3 Sprint Swim Sets with Nick Brunelli. Nick was a stalwart on the national scene in the United States for a decade. Even though he never made an Olympic team, he did retire in 2012 with over a half dozen world championship medals to his credit. Here are a few of the sets he used during his training for the 2012 US Olympic Trials.

Improve Your 100m Freestyle with this Epic Race Pace Set. Combine a deadly warm-up with race pace work with this workout designed to help you crush your 100m freestyle.

How to Develop an Unstoppable Freestyle Kick. The top athletes in the pool are not only fast swimmers, they are fast kickers. Here is your guide to a faster freestyle kick.

Olympic Coach Gregg Troy’s Favorite Distance Workout. He has coached over 7 5different swimmers to the Olympics, including Caeleb Dressel, Ryan Lochte and much more. Troy, head coach at the University of Florida, shares with us with his all-time favorite distance workout.