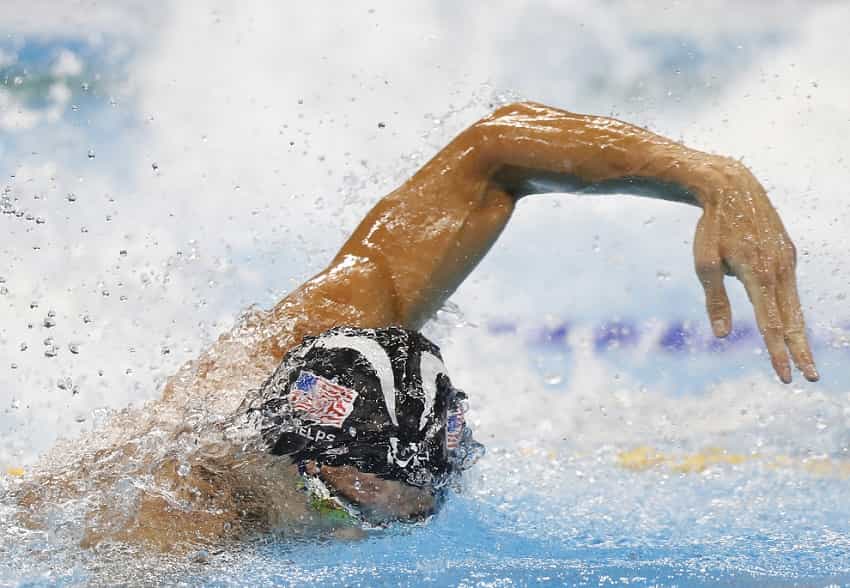 We all know Michael Phelps as a world-crushing butterflier, but his freestyle was epic in its own right.

And perhaps the most impressive thing about his freestyle was the range.

He could swim an elite 100m freestyle.

Phelps broke the 100m freestyle American record leading off the 4×100 free relay in Beijing. At the 2016 Rio Olympics, Phelps’s leg (and the booming underwater dolphin kicks off his turn) was the difference that sent the Americans to gold.

He twice thumped the world record in the 200m freestyle. The latter performance, done in Beijing, was one of his most dominant swims during the Great Haul of China.

Phelps also had the endurance to close the 400m individual medley with a crushing freestyle leg.

Developing the kind of freestyle that could compete in the 100 events and close the 400m individual medley took a lot of work, and one of the steps along the way was learning to train with a 6-beat kick.

As a youngster, Phelps would use a booming kick during fast efforts, and his long-time coach, Bob Bowman, saw an opportunity to punch the supercharger on Phelps’s freestyle. 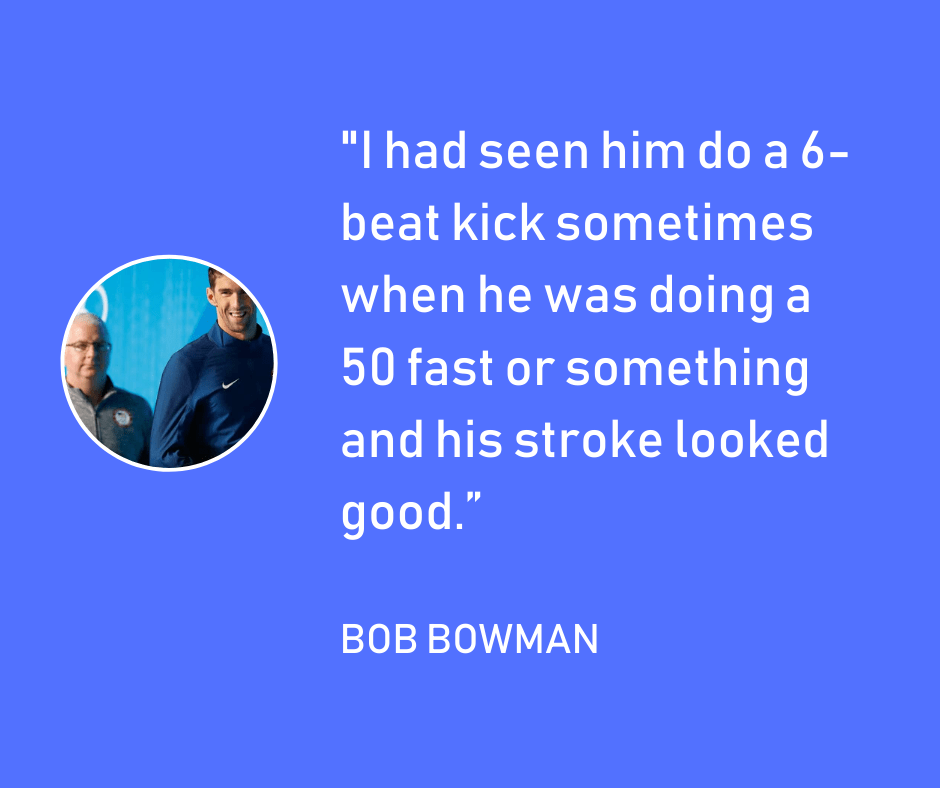 It took some time for Phelps to get used to it. And he got kicked out of practice a bunch.

It didn’t take long for Phelps’s freestyle to explode.

Bowman recognized that this adaptation helped Phelps appreciate the windfall of improvement that came from tackling and conquering something that was hard.

“I thought that was the single most important thing that we did teaching-wise with him,” said Bowman. “It showed him that making a technical change, even though it might be difficult, had a big effect.”

How will six-beat kicking help me swim faster?

But he’s the GOAT.

How does six-beat kicking help the rest of us swimmers, who perhaps have slightly more modest goals in the pool than becoming the most winningest Olympian of all time?

Well, there are a few reasons you should give it a look:

Your swim-specific conditioning will go through the roof.

Swimming with a six-beat kick is not easy.

If you have skated by with a one or two beat kick for a majority of your swim workouts, injecting your training with six-beat kick will be humbling.

The red-face, the huffing, the puffing—it’s all coming your way.

Get ready to drink it in. But it will be worth it.

Swimming with a six-beat kick is conditioning work for champions. Get after it.

Swimming with a six-beat kick sorts out some body position issues.

If your rear-end is cork-screwing, a six-beat kick will let you know. A six-beat kick keeps you honest about your legs and hips flopping around behind you.

Less criss-crossey legs means that you have a straighter and more balanced body position in the water, shaving off unnecessary drag.

Perfect for the fast kicker who doesn’t swim fast.

And the reason is because there is a marked difference between kicking on a kick-board, and the stability it provides, compared to the stability and focus on body position that is required to kick fast while also pulling and rotating like a champ.

Over the years I have seen plenty of swimmers who were specialists in kick or pull but had a hard time carrying over that prowess over to their swimming.

Six-beat kicking takes the leg conditioning you’ve earned from kicking on a board and puts it to the test while you are swimming.

Being able to kick a 50 in :30 is fantastical, but if you struggle to coordinate your arms and legs properly (and efficiently!) when swimming, that fast kick ends up being a fun factoid instead of a fast swim time.

A six-beat kick lengthens your stroke.

One of the things you will notice when you are kicking six-beat is that your stroke will lengthen.

Compared to a two-beat kick, where your legs provide basically no propulsion and your strokes become shorter and choppier, a six-beat kick promotes a longer extension of the arm stroke.

You start to kick through and into the catch.

A six-beat kick gives you options.

Now, I can hear the objections beginning to percolate. My kick sucks. I’m a distance swimmer. I don’t race with a six-beat kick.

Becoming proficient with a six-beat kick gives you the option of having it.

Ultimately, a six-beat kick is a tool for your swimming.

Training with it is a new form of challenge in the water, it’s extraordinarily specific conditioning, and it teaches you the ability to change stroke tempo.

Getting started with six-beat kicking

Want to spice up your swimming workouts with some more six-beat kicking?

Here are a couple ideas for introducing it to your swimming.

Catch-up freestyle is a commonly used freestyle drill, but a drill that swimmers often do slowly and with a lazy kick. Shorten the distance, and work this drill with a six-beat kick.

Another classic free drill is the old 1 stroke, 6 kick drill. Six-beat kicking while doing drill gives you a step towards the real thing.

Instead of hopping in the water and doing 30x100s with a six-beat kick, or trying to do a 1,500m straight with a rooster tail of white water behind you, work your way into it.

Here’s a simple progression of how this could look:

Here is a more advanced swim practice that targets six-beat kicking that I did recently:

6-beat kicking for the win!⁣ ⁣ I have been obsessed with getting into 6-beat kick shape, and this workout was designed around that goal. All of the 100s are designed to be swum with a 6-beat kick—overall speed wasn’t the goal, but you tend to go pretty fast when kicking like a monster.⁣ ⁣ 6-beat kicking is great for keeping your legs from cris-crossing too much, it’s exceptionally specific “kick” work, your distance per stroke gets locked in, and six-beat kicking while swimming is a deadly way to get in better shape. ⁣ ⁣ It’s not easy, but try adding some to your workouts and see your freestyle flourish.⁣ ⁣ #swimming #swim #swimmers #swimmerlife #swimpractice #swimmingpractice #swimspiration #swimcoach #swimcoaching #swimmerslife #swimfast #swimfaster #swimmingtime🏊 #swimmingislife #competitiveswimming #competitiveswimmer #swimworkout #swimmingworkout

Super Slow Swimming: How to Improve Your Technique and Feel for the Water. Swimming slowly and deliberately can make you a faster, more efficient swimmer.