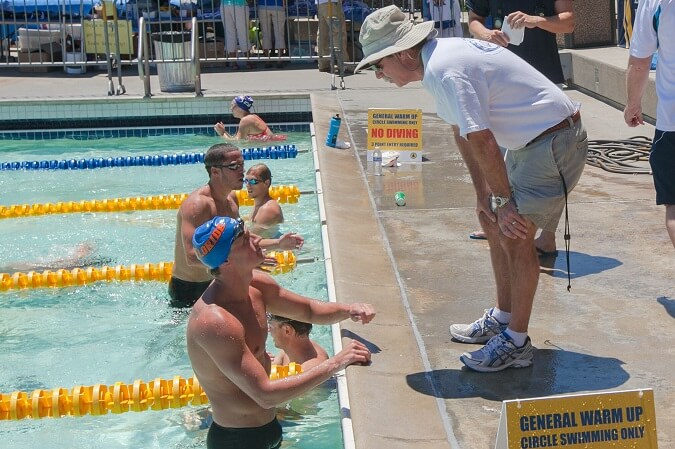 At its best, swimming is a straight-forward set of roles. Coaches do the coaching. Swimmers do the swimming. And the parents do the parenting.

But when the lines get blurred problems inevitably arise.

These kind of articles always get defensive reactions from some swim parents. And I totally understand why. There are some swim coaches out there who stink. I’ve had a couple myself during my swim career.

But the majority of them are hard working, caring, and great at what they do.

This list isn’t a slag on swim parents. After all, when parents do cross over to “helicopter parent” status it’s from love. They want the best for their children. It’s well-meaning.

At the end of the day, the sport needs swim parents that are involved.

See Also: 12 Things You Learn on Becoming a Swim Parent

Competitions, officiating, fundraising, budgeting and all of the other thankless tasks that go into making the sport go round are almost all done by swim parents who want nothing more than to see kids get a chance to swim and compete.

I get it—how can you ask someone who invests so much of their time and money (they do pay the club dues, after all) to back off when it comes to their child’s swimming?

Here are 7 ways that swim parents are drive their kid’s coach a little bit crazy:

You see it in the comments sections on swim sites frequently. The swim parent who has taken on part-time coaching duties for their swimmer unbeknownst to the swimmer’s coach.

The athlete will hear one thing on deck, and then be told something completely contradictory over the dinner table, putting them in an awkward position when they show up to their next swimming workout:

It’s hard enough for a young swimmer to learn the technical aspects of the sport while also trying to stay focused on effort without being contradictory advice at home compared to what they are getting on the pool deck.

2. All swimming, all the time.

Kids have a lot going on and so much to learn and experience. They already spend enough time at the pool and doing dryland, often spending more than 20 hours a week in swim-related activities by the age of 12.

There will always be times where they will need to vent about a bad swim practice. Or celebrate a great performance. But a relentless focus on the sport creates one-dimensional athletes whose identities become completely wrapped up in the sport.

3. Massive expectations for every race.

It would be awesome if a swimmer got in and swam a personal best time every single time they hit the water. I know I wish that was the way it worked!

But while it’s natural to hit a streak of PB’s after a growth spurt, or after jumping back in after a break, or during a shave and taper meet, there are lots of meets that are attended solely for racing experience. To get up on the blocks and get some fastish swimming in.

Will there be a personal best each and every time?

(Wouldn’t that be nice tho…)

Second guessing your coach and the training plan that has been laid out for the group is natural, but have faith in the experience and knowledge your coach has accrued.

4. They don’t let their kid “feel” their mistakes.

Is there a better teacher than failure? Than taking a shot at something and coming up short?

The humility and lessons that come with failures are often brushed aside in our day and age where every child must feel positive and upbeat all of the time.

But there is value in failing, if we allow the swimmer to experience and learn from it.

After all, it’s not the failure that will crush the little swimmer. In fact, once you give a swimmer a little bit of time to digest the swim and go over it with coach, they are surprisingly okay. Kids are more resilient than we give them credit for.

Give them a safe environment to fail and they will be more likely to take risks to pursue greatness.

See Also: What to Tell Your Swimmer After They’ve Had a Bad Swim

5. Love that is conditional on the way they perform.

Our sport’s athletes put enough pressure on themselves as it is. There is nothing more they want than to swim fast and crush their best times. Trust me—they want to perform at a crazy level.

But nothing hurts quite like having a bad swim, and then seeing the disapproval on your parent’s face.

6. Coaching from the stands.

Taking splits, video taping your swimmer, and cheering from the stands during practice is confusing for your swimmer. If you tack on trying to talk to the coach mid-session don’t be surprised if he or she pushes for a “no parents on deck” policy at the next board meeting.

Swimmers have enough to focus on during practice as it is. Between the sets, reps, intervals, technical aspects they have more than enough on their plate as it is.

You might think you are being helpful by interrupting the workout to tell the coach about that “fancy new training program” that Michael Andrew is using, but all you are doing is diverting the coach from his duties.

Which, if you are keeping track, also includes keeping the athletes safe in the water.

Let your swimmer stand (err, swim) on his or own two feet. They will better learn resilience and how to push themselves if they aren’t looking over for your tacit approval after every rep.

And lastly, we have the Parent-Agent.

We’ve all seen this parent, and perhaps even worn their shoes at times as well.

With numerous swimmers having gone pro at an early age, and the prospect of getting a four-year degree at a high level post-secondary education paid for in the realm of possibilities, it’s understandable that we might get carried away with the dollar signs.

After your little swimmer crushed the field at her last competition you are launching a full scale missile strike of questions, emails and text messages at coach:

“Do you think she will make state this year? At this rate can she make the Olympics? What are her chances at getting a D1 scholarship?”

Never mind that it was one competition, or that she is just 9 years old, but remember that it’s her sport, not yours.

And the moment that it stops becoming about what they want to achieve versus what you want them to achieve the fun gets squeezed out of the sport pretty darn quick.