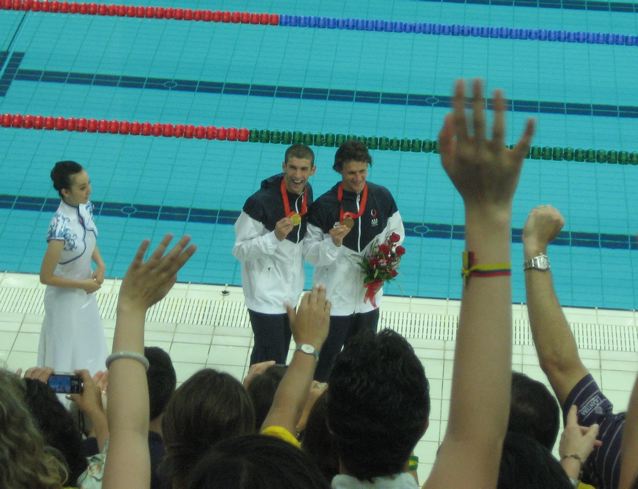 The rivalry that was built up between Michael Phelps and Ryan Lochte in anticipation of the Beijing, and especially London Olympics, was something that made for a great storyline, but in the end it was more about two teammates and friends.

At first glance, it wasn’t very difficult to cast them as opposites.

Phelps, with his manicured answers, carefully managed responses and polished media presence (despite the two hiccups that were his DUI and photographed bong hit) were an easy contrast to Lochte’s surfer-dude, laissez-faire attitude.

Phelps two bumps with the law (and USA Swimming – they suspended him from competition after the photo of him smoking marijuana at a house party went public) went against the grain of his public persona, while had they had happened to Ryan Lochte it would seem plausible.

Between stories of  filling balloons and lobbing them at concert goers, lighting a bag of dog poop (on his girlfriend’s front porch, of all people), Lochte – whether tactically or not, it’s not entirely apparent – has owned the image of the “whatever, man” athlete.

Which all makes it harder to imagine the two of them as pals.

LOCHTE’S EMERGENCE AS A FOIL TO PHELPS DOMINATION

In the mid-2000’s Phelps appeared unbeatable. After his appearance in the 200m butterfly at the Sydney Games, he quick took over the event, the shorter distance, and soon the Ims and the freestyle events. His legend was growing quickly, and in perspective, it hadn’t even come close to hitting its zenith, which would come in 2008 at the Beijing Games.

The media made a frenzy of Lochte beating Phelps in the 200IM at Winter Nationals in Atlanta in November 2007. The story was silly, of course, the race was short course, off-season, but that didn’t mean the swimming community wasn’t looking for a David to Goliath. Were Phelps days numbered?

Despite Phelps not swimming up to others expectations of him in the year leading up to Beijing, when it came down to crunch time he did not disappoint. He cleaned house, winning 8 gold medals, while Lochte fell behind in the medley events, placing 3rd behind Phelps and Hungarian Lazslo Cseh in both the 200 and 400. He did, however, win the 200 backstroke in world record time.

There is no doubt that they pushed each other to new limits.

Lochte had the greatest swimmer in the history of the sport as a teammate and competitor, to chase day-in and day-out, while Phelps had a hungry, talented swimmer who was itching the get to the top of the podium and taste some of the overwhelming success Phelps had been enjoying.

Lochte had the good fortune of being the underdog, the spoiler, until it came time for him to be the headliner, which happened for him in London.

With Phelps having been uncharacteristically unfocused and unmotivated in the run-up to London, many were expecting that Phelps would finally fall to the not-so-new newcomer. And the predictors were right.

Lochte would run away with the 400IM while Phelps would be shut out of the medals. Lochte was tactical in his comments leading up to and after the race. He acknowledged Phelps greatness, and his undeniable track record is the best of all time, while also asserting that he was now the top dog.

Lochte has committed to swimming through until Rio. One gets the sense that he wants to fully unshackle himself from Phelps shadow, knowing that his career to date is of that of “the other guy.”

Phelps, meanwhile, has left the door open for a return to the sport after insisting at the London Games that they would be his last.

As of May 2013 he was reentered in the drug testing pool, and if comments by his coach are to believed (so far both coach Bob Bowman and athlete have been remarkably coy about intentions – even though they both have known since at least last May that he was still in the drug-testing pool) he is in pretty rough shape right now, and has a long ways to go to sniff at his past form.

There is no doubt, however, that with Lochte’s plans to focus on shorter events, and Phelps’ limited base and training that if both of these men are going to be meeting at the pool again, it will be in the shorter events, to write yet another chapter in their storied friendship and rivalry.