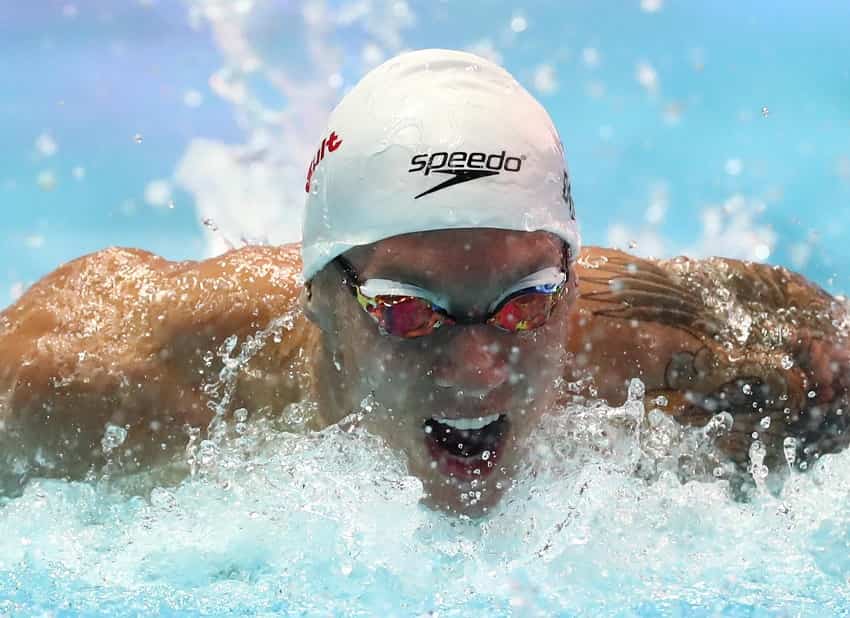 In this post we are going to look at how you can use the same approach and mindset that Olympic champions use to better your own training and swim practices.

Getting to the top of the swimming summit is not an accident.

There’s a lot of dedication, commitment, and of course, the natural talent required to get there.

Even if you don’t have designs for going to the Olympics yourself, there are some things you can learn from the training habits and the mindset that elite swimmers use to prepare. 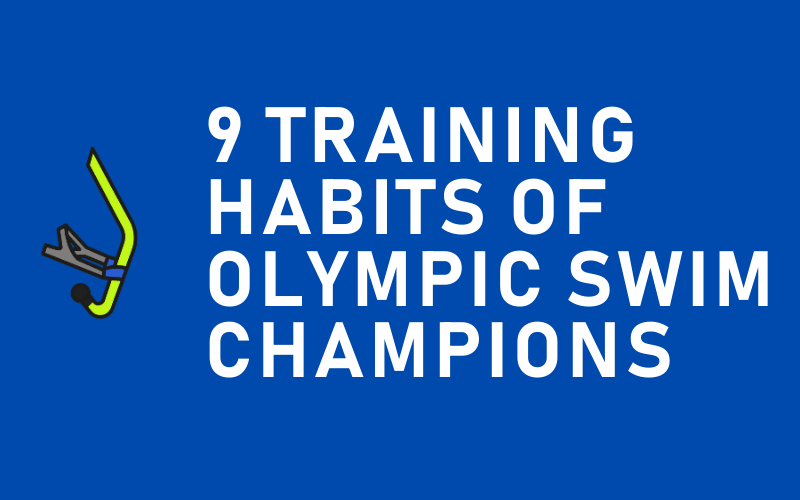 While having big goals is motivating and can give us a little pep on those early mornings or when we are struggling through a tough session in the water, fixating on the distance to be covered can be overwhelming.

Instead of getting discouraged by ALL the work ahead of you–the countless meters, all those test sets, the uncertainty and doubt–shine your flashlight of focus on the next step.

“It’s focusing on the little steps along the way,” says Caeleb Dressel, an Olympic, NCAA and World Champion. “It’s having a great practice tomorrow morning and trying to improve in those two hours, then moving on and having a great day. It’s really like having a flashlight in front of you and making sure you’re taking the right steps toward the light at the end of the tunnel.”

How swimmers can adopt this approach in practice: 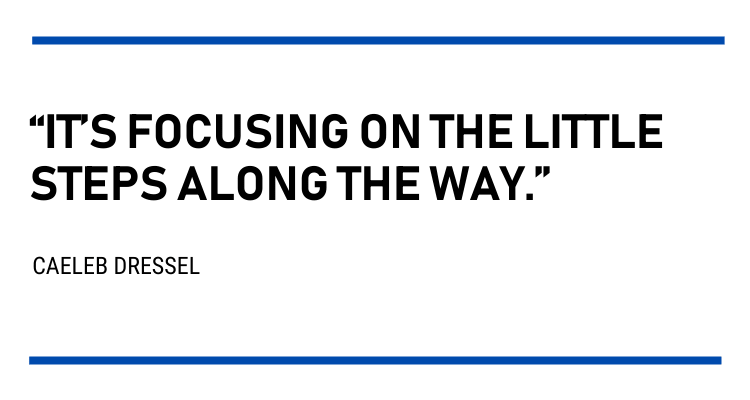 One of the oft-cited cliches of high-performance sport is that champions aren’t made at practice—they are made in the hours between training sessions. Sleep is one of the funnest ways to get better as a swimmer, but as you can probably guess, not many of us get enough of it.

Nathan Adrian, certified monster, 100-meter freestyle Olympic gold medalist and now a cancer survivor, uses sleep as a weapon when he is being buried by brutal stretches of training. When at Colorado Springs with his American teammates, Adrian is getting up to 12 hours per sleep.

“At training camp I’ll sleep 10 to 12 hours a day because it’s eight-plus at night, and then a two-hour nap between practices, and then whatever I can scrounge up later,” says Adrian. “It’s amazing. But, it’s very necessary.”

Not all of us have the luxury of being a professional athlete, obviously, but that doesn’t mean we can’t be smarter and more intentional about getting proper rest.

“Eating right was huge for me this past year, probably the first year that I really took diet seriously,” Murphy said post-Rio. “Essentially, I didn’t have a bad practice for three months in a row, just because I felt like I was doing everything right.”

How you can fuel yourself for better swim practices: 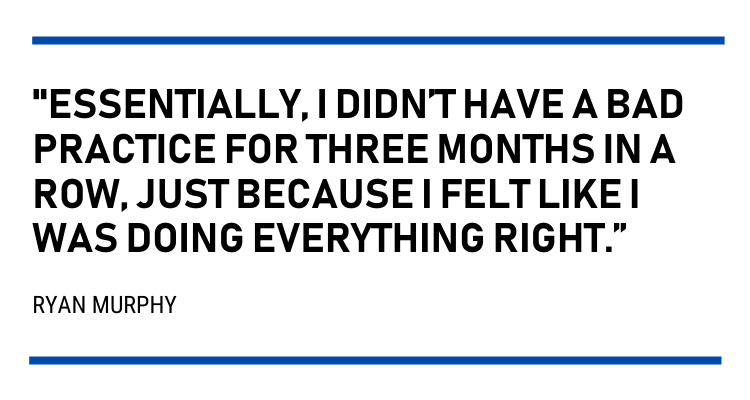 Swim practices can be exceptionally long. It’s natural that our focus should be tempted to wander.

We start thinking about the show we are going to watch when we get home, the argument we got with our girlfriend, or the roody-poo that cut us off in traffic on the way to the pool.

“You have to listen to what’s going on with your body. That’s how you’re going to improve the most,” says 12-time Olympic medalist Natalie Coughlin. “It’s really important to be present and in the moment.”

How you can be more focused at practice:

5. Each day is an opportunity to get better.

Elite swimmers use training and practice as a laboratory. They are testing out new things, seeing what works, what doesn’t and being vulnerable along the way.

Being vulnerable requires a psychologically safe environment—it’s one of the key characteristics of groups and teams that perform at a consistently high level—but it also requires you to take a learning mindset every day to practice.

Recognizing that you don’t know everything. And that it’s okay to struggle with improvement along the way.

“I come to practice every day with the mindset that I’m there to get better,” says Dressel. “I don’t like when people watch my practices or record my practice because, for me, that’s a very emotional time. That’s my window to improve and I just want it to be between me, my team-mates and my coach.” 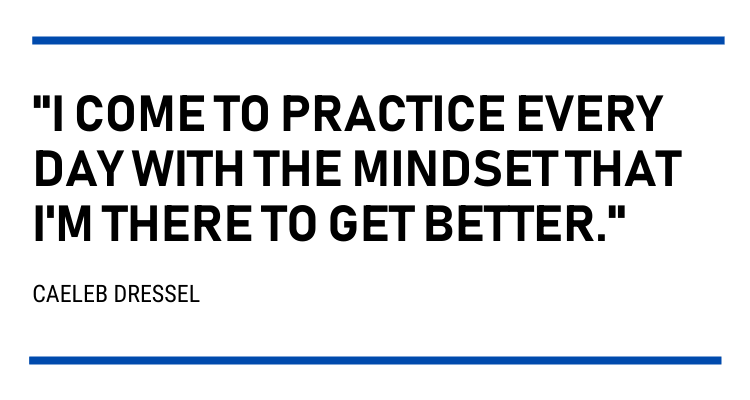 The ascent of an elite swimmer is marked by the ability to learn quickly from failures and setbacks. Research has shown that persistence alone is not enough for getting to the top level. Elite swimmers have the distinct ability to learn from their setbacks, miscues, and failures.

At the US Olympic Trials in 1988, future swimming superstar Summer Sanders was winning the 200-meter individual medley with one lap to go. She ended up third, missing the team.

Although “failing,” Sanders credits that moment with the fuel to steamroll to the next Olympics, in Barcelona in 1992, where she would win gold in the 200-meter butterfly.

“Failing at something is the best way to learn what it takes to succeed at it,” she says. “Failing to make the Seoul Olympic team was the beginning of my success, ironically enough.”

This means, at practice today:

You won’t succeed 100% of the time, but with an attitude that recognizes failure as a stepping stone, you will succeed and grow as an athlete and a person a whole lot faster. 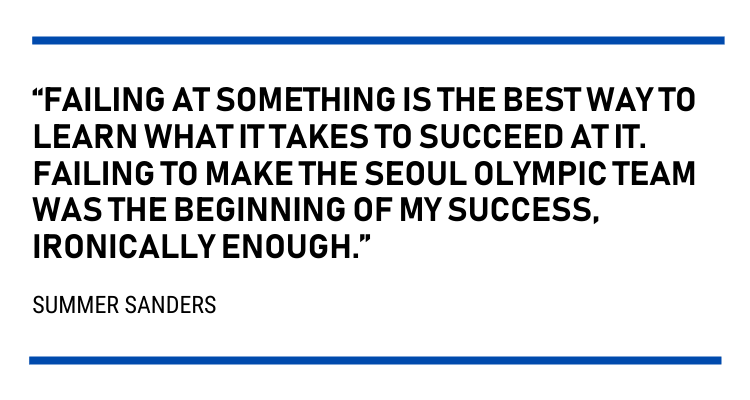 7. Reflect and evaluate on your swimming to get better.

The highs and lows of swimming can be difficult to navigate for the swimmer who believes that improvement should go up and up and up.

Having an even keel, a measure of objectivity and moving on from bad sessions is key. For Caeleb Dressel, part of learning how to manage the ups and downs and increasing self-awareness of his performance comes from one of the oldest performance tools out there—a simple logbook.

“I’ve been keeping practice logs since high school for statistical stuff and technique stuff,” says Dressel. I write down what we did in practice, long course or short course, how I was feeling, the times I went, then close the page, move on and not reminisce – which is important because sometimes I focus too much on the bad.”

How to use a logbook to improve your swim practices:

8. Confidence comes from the process.

Self-confidence is a tough thing for many swimmers to wrap their chlorinated heads around.

They believe it’s something that is natural, or only shows up when they swim a best time, or that having self-confidence out of their control.

But authentic, record-breaking self-confidence comes from recognizing a pattern of excellence in what you do.

It means giving yourself props when you do things well, not papering over them in favor of dwelling on the mistakes you have made, and keeping a record of them and reminding yourself of your abilities and accomplishments.

“Confidence comes from what you do in practice every single day,” says open water and distance ace Jordan Wilimovsky. “When race day comes along, and you’ve done all the work you can do, there’s really nothing else you can do to prepare, so you’ve just got to let your swimming do the talking and have fun.”

How swimmers can build real self-confidence in training: 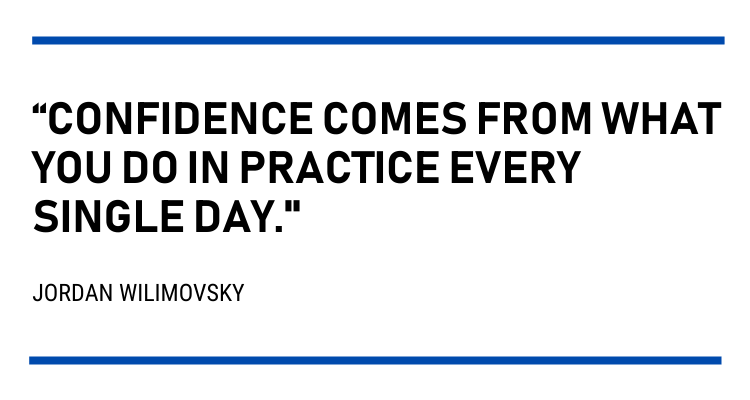 9. Don’t put a limit on what you can achieve.

Everybody will have an opinion on what you can or can’t achieve. Ultimately, your goals are yours, and if purposely not setting an exact goal or goal time helps you keep the ceiling open on your achievements, then so be it.

Regan Smith stunned the world (and herself, judging by her reaction in the water afterward) at the 2019 World Championships in South Korea, shattering the WR in the 200-meter backstroke by over seven-tenths of a second. (Also a best time by over three seconds.)

Prior to the meet she was interviewed and mentioned that she preferred to keep an open door on what she could do in the water.

“My coaches and parents think it’s weird that I don’t have a real goal for World Championships,” said Smith. “I don’t like putting a cap on what I can do. Since I am still young and have a lot of room to grow, I don’t want to put a limit on what I can do. I’ll be happy no matter what.”

Focus on the process.

Swimming, like all sport, has a fair degree of uncertainty when it comes to the results.

We cannot control exactly how things will go on race day.

Maybe we catch a bug the night before a meet. Maybe a competitor comes out of nowhere and karate-kicks the world record. Maybe finals are pushed back two-hours because of weird weather.

We can’t control the outcome, but elite swimmers know that they can control their process. No matter what is happening around them, they are able to sink in to their confidence-building and focus-sharpening process.

“By focusing on the process and continuous day-to-day improvement, they stop worrying about the end result,” says Cyndi Gallagher, longtime head coach of the UCLA Bruins swim team. “That frees them up to enjoy what they are doing.”

Not only does focusing on the process give swimmers something they can control and improve upon each day at practice, they also tend to have a lot more fun along the way.

Teri McKeever, Cal women’s swimming head coach and head coach of the 2012 US Olympic women’s swim team adds: “The women that I have worked with that medal are the ones that really enjoy the process.”

What being process-focused at practice looks: 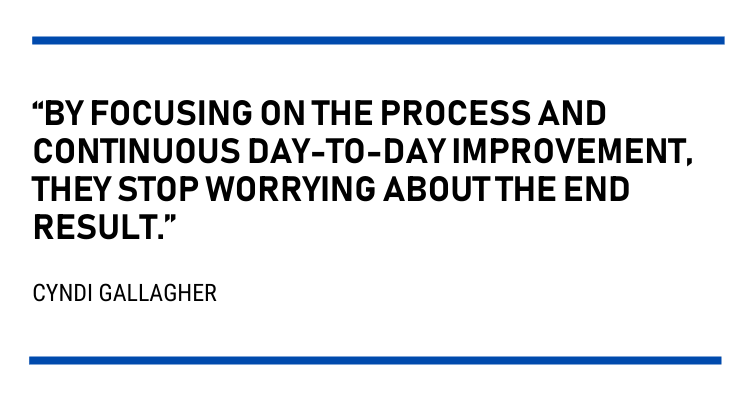 Getting the most of yourself each day at practice and in the gym means using the right skills.

And a whole lot more.

Conquer the Pool: The Swimmer’s Ultimate Guide to a High-Performance Mindset helps you build and develop these tools so that you can set to dominating your swim practices.

Used and trusted by some of the top clubs and swimmers on the planet and written with the feedback of 200+ head coaches, Olympians, former world record holders, and NCAA champions.