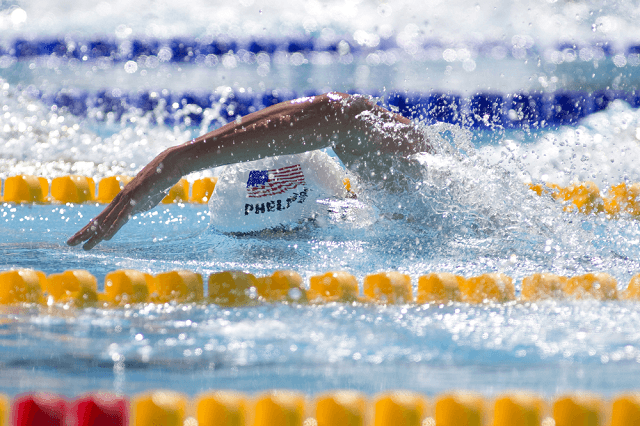 7x World Swimmer of the Year.

It’s pretty easy to quantify the greatest swimmer of all time when we look at his accomplishments. But Phelps brought more to the stage than medals and records. Things that aren’t so hard to write down in a spreadsheet.

Things like inspiration. Hope. Motivation. The belief that anything truly was possible.

Here are 5 things that Michael Phelps taught me about success both in the pool and in life:

In an interview that Michael Phelps and his coach Bob Bowman did with 60 Minutes post Beijing, interviewer Anderson Cooper and Bowman talked about the rigorous training demands that Phelps had undergone in the lead up to the 2008 Olympics, where he would ultimately win those storied 8 gold medals—

Bowman: For about 5 years he did not take one day off.

Bowman: Nope. We trained on Christmas.

Bowman: Oh yeah, that’s a given. Twice on his birthday.

The desire not to lose, and the desire to accomplish something that had never been done before in Olympic history were what drove Phelps during those grueling years. From setting goals that were next-level, to showing up every day and putting in more work than the competition became a hallmark of their work together.

“If you want to be the best, you have to do things that others aren’t willing to do,” Phelps said.

The road most traveled is exactly that; the one that most journey across, rarely taking a risk, rarely extending themselves beyond their comfort zone, and achieving exactly what everyone else is doing – the typical.

To be the best at something is by it’s very definition to be abnormal. To separate yourself from the crowd and become exceptional requires first that you leave your comfort zone and reach out across your self-imposed limitations into the ether of the unknown.

2. Talent and your past work will only get you so far.

After Beijing the inevitable let down happened. He went on a whirlwind tour across the world, doing late night shows, day time shows, appearances for sponsors, and started up his foundation with the $1 million bonus that Speedo gave him for the Beijing heroics.

Over the next couple years he would have difficulty motivating himself. He had accomplished so much, and with those 8 golds securely put away he felt a sagging sense of purpose. As a result he began missing practices. And not giving the effort that was required of him when he did show up.

So much so that USA Swimming teammate Tyler Clary, who trained with Phelps at Michigan, called him out for having a substandard work ethic.

“I saw a real lack of preparation from him,” Clary told a reporter prior to the London Games. “Basically, he was a swimmer that didn’t want to be there.”

During the same 60 Minutes interview both Bowman and Phelps readily admit that he was having a hard time keeping interested in the sport after 2008.

There was little doubt that the Phelps who showed up in 2012 was not the same as the swimmer from Beijing. Swimming out of lane 8 he placed outside of the medals in the 400m individual medley on the first night. And then he lost the 200m butterfly to South African upstart Chad le Clos – an event that he had utterly dominated for over a decade.

See Also: #PhelpsFace Is Blowing Up The Internet

All too often when we achieve some measure of success we relax. We lean back, chill out, and feel that because now that we have made it everything is going to be golden from here on out.

In reality, the world will always catch up. There is no permanent position for the best; to stay there requires continuous work and focus.

3. The goal should be bigger than yourself.

Phelps’ main goal in the sport was never solely about winning golds at the Olympics. But rather, those Olympic wins were meant to help further his main goal, which was to bring swimming to the masses, to transcend the sport, to prove that swimming didn’t have to be an every-four-years sport.

In the years following the Olympics that Phelps competed in the membership of USA Swimming increasingly grew with each Olympiad, until in 2009 the number of registered club swimmers in the United States grew by a whopping 13%. This figure doesn’t include the countless number of swimmers that joined summer leagues, high school teams, and even masters programs across the country and world.

Perhaps the most striking of the “Phelps effect” was best exemplified by Chad le Clos, the man that beat him in his best event in London. Le Clos had been inspired to take up swimming because of Phelps. As a 12 year old in South Africa, Le Clos watched Phelps compete at the 2004 Athens Games and decided at that moment to become the best swimmer he could be.

Tap into a greater purpose with your swimming and your goals. It can be something as small as volunteering to coach the youngsters on your team, or to further the popularity of the sport by starting a team at your local high school.

When we find a deeper purpose to what we are doing we connect further with the sport and our goals, while also finding an additional layer of motivation and inspiration.

4. Failure should drive you, not cripple you.

While it’s hard to look at the most decorated athlete in the history of the Olympics and imagine him failing, Phelps has had numerous setbacks over his career. There was the DUI charges, being photographed at a party smoking pot. These have been well documented in the popular media.

But what casual sports observers might not know is that there was also the time that he broke his wrist slipping on some ice during an Ann Arbour winter in Michigan. Just 8 months short of the Beijing Games, Phelps was ordered out of the water while his wrist healed. Instead of swimming, Phelps went to work on a stationary bike, logging up to 3 hours per day for the next two weeks until he was cleared to hop back in the pool.

See Also: The Research Behind the Mindset of Super Champions

Setbacks and failures happen to us all. We tend to imagine that our sports heroes being larger than life and immune to such things, but that is not the case.

When asked how he handles failure and setbacks, Phelps says that they are probably more beneficial, for they help to fuel him. “I don’t like to lose. If I fail, I ask myself, “What can I do to make sure that doesn’t happen again?”’

5. Surround yourself with people who believe in you.

In sport, as in life, to be successful requires a group surrounding us that support us, encourage us when we fill with doubt, who help us back on track when we stumble. We tend to lean towards wanting to be completely self-sufficient and independent, but our success is reliant on the people we choose to surround ourselves with.

Phelps is no exception.

He was 11 years old when Bob Bowman recognized his talents and fierce competitiveness at the North Baltimore Aquatic Club. Bowman encouraged the youngster to dream big, to start setting goals and to make a plan. Over the years the two would stay together, even when Bowman has brought on at Michigan, even after the monumental Olympic success, and even when Phelps walked away from the sport and then decided to make a return.

On the home-front things were no different.

His mom Debbie was a fixture during the NBC telecasts of his last three Olympics. And for good reason. The single mother raised a family of swimmers, showing the dedication required to be a swim parent, pulling driving duty for Michael and his two older sisters. Driving them back and forth to the pool to two-a-days and weekend meets were among the sacrifices she made to help Phelps chase his dream.

Perhaps most importantly, she believed in him. Encouraged him to chase his dreams when most other parents would have quietly sighed and shook their head. She allowed her son to grow. To make his own mistakes. To learn to be responsible and accountable.

Success is difficult. There’s no doubt about that.

But to do it completely on your own is hilariously challenging. By surrounding yourself with people who believe in you you gain the advantage of having people in your corner, who have your back no matter what the outcome, who believe in you during the times that you even don’t.