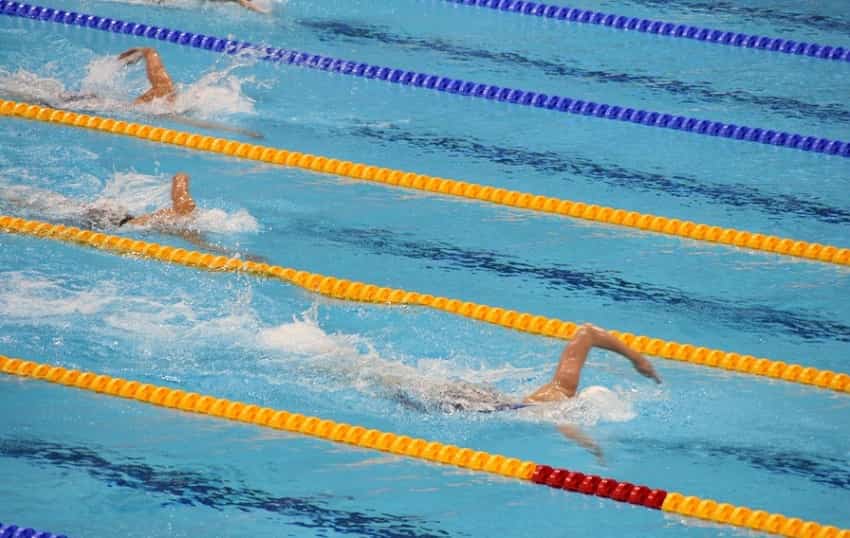 Kind of the worst.

And sadly, an extremely familiar experience to just about anyone who has ever laced up a swim suit and spent half their year swimming counter-clockwise around a black line.

Some of MC Plateau’s chart toppers include:

While there should be some comfort in knowing that they happen to everyone (hey, that Michael Phelps guy didn’t go a single best time between 2009-2016 if that helps), it doesn’t make them any less confusing or frustrating.

Swimmers are at their best when they are working hard and seeing the results from their hard work. So I can understand how un-fun working your tail off for 20+ hours a week can be when you are seeing the same or worse results from it.

Here’s what swimmers (and swim parents!) need to know about this scary and also super common phenomenon.

1. Not every meet is a championship meet.

Going to start off with one of the basics.

Swim parents frequently email me in a panic because their swimmer added time at a recent meet. When asked if this was a shave-and-taper meet, or a meet that borders on any kind of significance, the answer is—“Well, not according to the coach.”

The in-season meet can seem like an odd concept for the neophyte swim parent: “You want my little swimmer to go to a meet and more than likely swim slower than they usually would?”

In-season meets are designed to teach racing skills, educate swimmers on how to prepare to race, learn to race when tired and it gives them a break from regular training.

(For a full breakdown and expectations swim parents should have for the in-season meet check out this guide I wrote on the topic.)

Here’s a personal example that swimmers will be able to relate to.

Over the summer I dedicated myself to sprinting as many 50s long course as I could, with the end-of-summer goal being able to swim a :25 from a push.

The plan was straight-forward: I would start by doing 300 reps at :28, with the cautious expectation being that by the time I got to #300 swimming a :27 would be a piece of cake.

The number 300 was an edumacated guess that was conservative enough that I wouldn’t get discouraged if progress wasn’t happening fast enough, but specific enough that it gave me something concrete to chase after over the weeks and months.

So, was my guesstimation of 300 on the money?

But as you can see, my guess was still way off.

I especially couldn’t have predicated that rep #235 was going to be the magic number for the big breakthrough.

In fact, the day that happened I was feeling remarkably unremarkable. There was nothing in the lead up to practice that day that suggested a breakthrough was coming along.

This happened with the :26s and ultimately the :25s, too.

At no point was I able to perfectly predict the breakthrough. They happened with due time and consistent effort.

The lesson should be clear.

Plateaus can quickly become demoralizing when we feel that we can perfectly predict results or outcomes. All you can do is show up every day to practice and do your absolute best in everything you do.

The breakthrough might happen tonight, tomorrow, next week, or next month, but as long as you are showing up and putting in the reps it will happen.

3. Improvement doesn’t happen all at once.

One of the messy realities of getting better in the water is that it’s not just one thing you are trying to improve.

It’s a whole series of things: your catch, your pull, the way your hips rotate, your endurance, your strength, your mindset, the focus you use, the self-talk you use, and on and on and on.

Problems happen when we look at the clock and use that as the only barometer for whether or not we are improving.

But rarely does a time or placing tell the story of why or why you haven’t been improving. It’s almost never as simple as “I’m getting faster” or “I’m getting worse.”

Yes, you might have added time to your PB—but did you swim a better technical race? Are you in the middle of hard training? Did you execute a smarter race strategy?

The clock might not lie, but it doesn’t tell the whole truth about your performance. There is always something you can work on in the water that has nothing to do with the clock.

This highlights a very powerful reality of the sport that you need to especially remember when in the pits of a plateau: Swimming fast starts with swimming well.

Think about the last time you learned a new skill or technique, whether it was in the pool or not. Those first few attempts were okay, because you had no expectations, right? You expected to not be able to do it perfectly right off the bat, so it was okay that you were sucky at it.

But as you got more proficient, your expectations went up, so that by the fifth or sixth time you were struggling, it starts to get a little frustrating. You might even perform worse, which makes no sense on the face of things.

Sometimes we get worse before we get better.

Just keep showing up. Keep working at it. That breakthrough is just waiting around the corner to surprise the chlorine out of you.

5. The better you get, the harder it will become to improve.

Just wait till you get really good.

Mark Tewksbury, Olympic gold medalist in the 100m backstroke at the 1992 Olympics, went seven years of training in order to drop 1.2 seconds on his best time.

After 2009, Michael Phelps didn’t get a single personal best time in any of his major events for the rest of his career. Think about that for a second: seven years, countless meets, never swimming as fast as you once were.

When we are young and new to the sport we improve by leaps and bounds. Not only because we are learning at an accelerated rate, but we are also physically growing and changing like crazy.

The source of improvement becomes very muddled when you are learning tons of new skills, growing a couple inches per year, and getting the meters and training under our belt to put those skills to use.

Just as progress will sometimes be almost exponential at an early age, the older you get, and the slower you grow, and the better you are, the harder those PBs will be to crack-a-lack.

6. You improve at your own rate.

Plateaus can feel crushingly personal at times: you feel stuck in the mud while your teammates or competition are improving at light-speed.

The rate you improve is going to be different than others, so be wary of comparing yourself to other swimmers, especially if you are going to base your effort and motivation on how others swim.

Competitive swimming is a competitive sport. Which means that we are perpetually comparing ourselves to swimmers in the next lane.

But instead of locking your focus on what other swimmers are doing, make sure that you are doing everything you can to be the best swimmer you can be.

7. Improving means making things harder on yourself in training.

Okay, so now it’s time for some hard truth.

Whenever I get a panicked email about a swimmer who is stuck, it’s usually because they are doing the same old thing and expecting new results.

It’s easy to feel your swimming come to a shuddering halt, immediately point your finger and bubble-scream through the water, “Plateau!”

Yes, you might be working hard, but effort is not only subjective, it isn’t enough: If you aren’t also working faster and with greater degrees of difficulty how reasonable is it to think you are going to burst through?

Drop five seconds off your intervals. Take one less stroke per lap. Do one extra dolphin kick off the wall. Sleep an extra hour tonight. Take one meal each day and make it twice as healthy. Add five pounds to the weights you are lifting this week. Spend an extra ten minutes working on your self-talk skills.

Often when we are stuck or “plateaued” it’s because we are stubbornly sticking to what we’ve been doing without making any moves forward.

The hardest thing about improving is that it’s a relentless progression of your process.

It never ends. No matter how fast you get, no matter how well conditioned you become, your process needs to continually improve…or you simply won’t.

The secret to breaking plateaus is in your process

Are you consistently elevating your process?

If so, it’s all good. This plateau will pass quickly enough. You are doing the right things.

Swimmers treat race day performances as a report card for their swimming. Which is ridiculous: You take one race, usually less than a couple minutes long, and use that one swim to indict a whole season of training.

Instead of looking at the result, look at your preparation and process.

Are you improving in training? Are you doing more meters at a faster speed? Are you spending heaps of time refining your stroke? Are you working on cleaning up your nutrition and sleeping habits?

Before you decide that you are in the middle of a plateau take a look at your training and ask if you are progressing with your process.

If you are consistently improving your process, guess what?

The results will absolutely come, this I promise you.

Practice is Everything: The Mindset Behind Superhero Workouts. If you are serious about accomplishing big things in the pool you need to rethink the way you train. Here is why practice is everything.

The Research Behind the Mindset of Super Champions. Curious to know what separates elite swimmers from the nearly-elite? Some fascinating research finds some key differences in mindset.