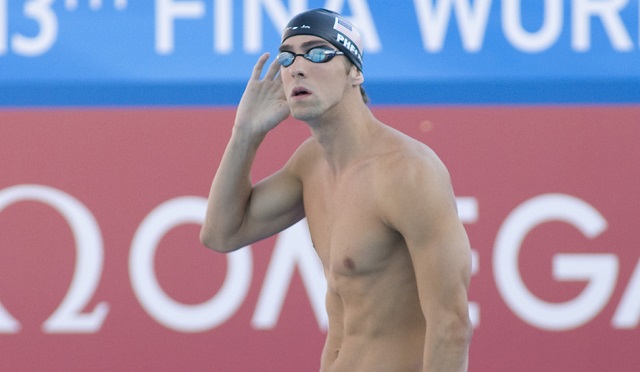 There are a ton of benefits for choosing swimming as your sport of choice, but probably none that serves our vanity quite as much as having a swimmer’s body.

After all, how many times have you heard someone say, “Man, that dude totally has a football body!”

Swimmer’s bodies get love because we are lean, but not too lean. Usually tall, with long limbs, flexible, with broad shoulders, and a (mostly) defined abdominal areas, the competitive swimmer look is one that is fashionable in all seasons.

Here are 9 signs that you have a swimmer’s body:

Swimmers at the top levels of the sport are inordinately tall.

As an example, the average height of male 100m freestyle world record holders is 6’4” dating back to 1976, with the United States’ Rowdy Gaines being the shortest amongst the group at 6’1”. (Which is also how tall Missy Franklin and Aussie sprinter Cate Campbell are.)

But fear not my vertically challenged friends, there is still room for those who weren’t born to NBA-sized parents.

The distance legend Janet Evans was 5’5. David Berkoff, the guy whose underwater dolphin kick was one of the stories of the 1988 Seoul Olympics, was 5’8.

More currently, Japanese superstar Kosuke Hagino is 5’8”, showing that while the general trend of swimmers is tall, it’s not a deal breaker if you aren’t.

Before the start of every race Michael Phelps gets up on the blocks and wrap-slaps his arms and hands behind his back. Phelps’ also has remarkably flexible ankles, and hyper-extending knees and elbows.

The overhead movement required for fast swimming means we have flexible lats, shoulders and back.

After all, whipping our arms above our shoulders for thousands of meters on end requires them to be at least mildly flexible.

I’m not talking about being able to lift massive amounts of weight in the gym, but relative strength. (Although freestyler Nathan Adrian’s 160 pound dumbbell bench press—per arm—might have something to say about that.)

Michael Phelps could do over 30 pull ups at a time. Natalie Coughlin crushes both in terms of relative strength and when playing around with the dumbbells.

4. You have hilariously large lats.

With all of that overhead work comes highly developed lats. Your lats stretch across the entirety of your back (latissumus dorsi means broadest back in Latin), from your spine to your shoulder.

From the kazillions of pulls we perform over the course of our swimming careers these muscles get rather, well, large. The large, expanse of a back is a hallmark of the competitive swimmer regardless of your stroke or distance.

5. You have swimmer’s shoulders.

Or as we call them…

They are so pronounced that they are termed specifically for us.

Completing the V-shape common to swimmers are those boulder shoulders. Or, as we shall call them—bashoulders. (I’ll work on that one.)

The cumulative effect of a big back and big shoulders means that shopping for clothing is a bit tricky. Sitting on the aisle seat on a plane means you are getting body checked by the snack cart and bathroom-bound passengers no matter how far into your seat you try to tuck yourself.

And no matter where you are at in the world you can spot a fellow swimmer by the high shoulder to waist ratio.

Despite all of our (relative) strength, and the shocking amount of time spent both in the pool and in the weight room, we are lean.

After all, success in the water demands it.

Unlike our land-locked sporting brothers and sisters we compete in a medium that is trying to slow us down at every turn. Water is thick to the tune of being nearly 800 times denser than air at sea level.

In order to combat this we need to assume a form that is less Diesel F350 and more Murcielago.

Swimmers who are built with sleekness are rewarded with much lower drag than their overly muscley compatriots.

The end result of this slender footprint in the water is efficient and fast swimming.

7. Your hair is constantly wet and beat up.

It’s not too hard to discern swimmers from the general population by just looking at the tops of their heads.

During the winter they are the ones who have water-logged heads for the first couple hours of the day, with the tops of the back of their shirts and sweaters becoming soggy.

Over summer months— when the outdoor pools provide a 1-2 combination of ultra-violet rays and chlorine—our hair gets particularly manky. Stiff, weathered-looking and border-line brittle, like you could break it off if you twisted it with too much enthusiasm.

Although there is the misconception that chlorine turns our hair green (the culprits there are “old brass fittings, gas-heater coils, trace copper in the water supply or residue from copper-based algicides that are dissolved in the water”), it’s more the perpetual sogginess, the tangles and the nearly surfer-boy look that our hair takes on that identifies us.

8. You have all the triceps.

For a moment imagine this… A swimmer with large shoulders, and the expansive latissumis dorsi to go along with it… And then tiny triceps.

Seems a little weird, doesn’t it?

To go along with all the other backside muscular awesomeness swimmers are also gifted with bulging triceps.

For everyone except for those weird breaststrokers (I only call you guys weird because I never learned to master the stroke. So maybe I am a little jealous…) swimmers use their triceps to finish the stroke, meaning that over the course of their careers they do about 3.2 million tricep extensions.

With that kind of work they are bound to get huge.

9. The amount of body hair you have is always in flux.

Hair is part of your body, right? Yup!

This leads to some tortured and lengthy hotel shave down sessions for some of the more developed males, and lamentable amounts of ‘splaining by the ladies for why they have hairy legs between meets.

No matter how many times we hear—“but does it really make that much of a difference?”—we know that yes, it actually does.

We understand that it is impossible to replace that feeling when we first dive in after a shave and sense as though someone had slapped a prop to our backside.

And that no matter how many times we nick ourselves, and how many times we shaved against the grain (can you tell I sucked at shave downs yet?) it was always worth it when we felt amazing diving into the water.