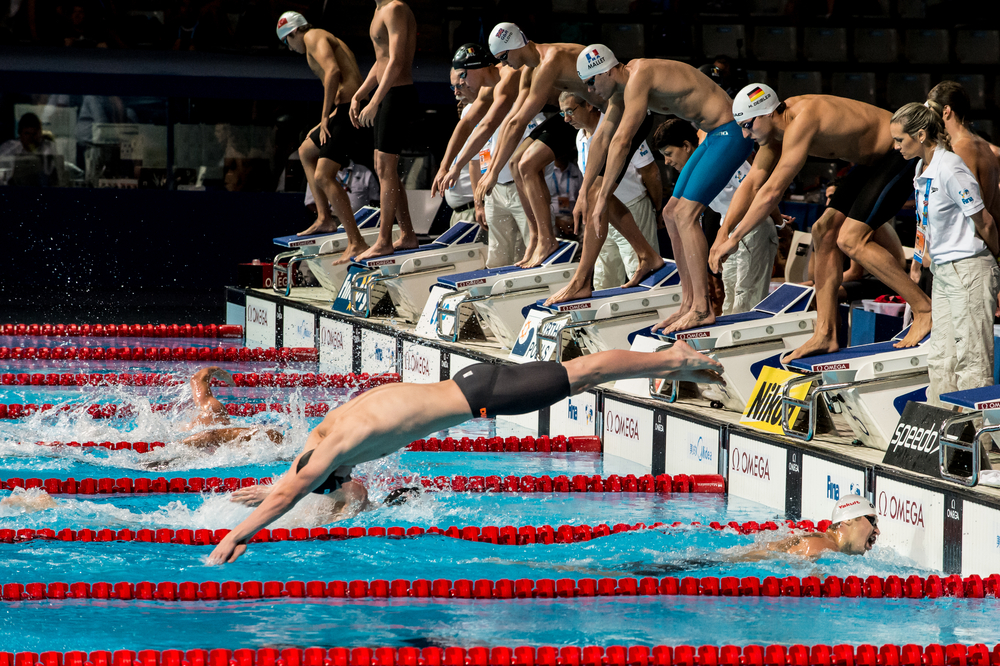 The 4x100m medley world record has been tracked and ratified by FINA, the world governing body for swimming, since 1953. The medley relay comprises of four swimmers, each swimming a specific stroke in a specific order (cannot be altered), starting with the backstroke, breaststroke, butterfly and freestyle. Unlike the individual medley, the relay starts with backstroke instead of butterfly.

The event has been contested at the Olympic level since the 1960 Games.

The first WR on file is from 1953, with a team of Swedes posting a 4:39.2 in Helsingborg, Sweden. By the end of that first year the record would be broken 5 more times by teams from France and the Soviet Union.

In 1960 a squad of Americans would take possession of the record. Frank McKinnery, Chet Jastremski, Mike Troy and Peter Sintz would post a 4:09.2 that would last all of a month before a team of completely different Americans would break it again a month later.

Since 1960 the record has only not been held by the USA on two occasions; for a year in 1967-1968 when an East German squad led by Roland Matthes swam 3:56.5, and another year bv a different roster of East Germans in 1970 posted a 3:54.4. After that it has been clear sailing for the Americans. Mark Spitz would swim the butterfly leg of the team in Munich that would win gold and give Spitz his 7th gold medal and WR in a single games (3:48.16).

Legendary American names like Rowdy Gaines, Pablo Morales, David Berkoff, Jeff Rouse, Lenny Krayzelburg, Gary Hall Jr., Matt Biondi, and John Naber litter the record book in this event. They are joined now by other names that are sure to be hoisted into the rafters in the years to come; Aaron Piersol, Jason Lezak, Ian Crocker, and of course, Michael Phelps.

The current world record in the men’s LCM 4x100m medley relay was posted at the FINA World Aquatic Championships in July of 2009. Here is how the race was broken down—

On the short course side of things, the first world record in this event was held by the Canadians. The team of Mark Tewksbury, John Cleveland, Tom Ponting and Gary Vandermeulen set the time of 3:34.86 at the Canadian Short Course Nationals in February of 1992. Tewksbury’s lead off leg of 52.50 was also a world best in SCM at the time.

The current WR in the SCM 4x100m medley relay is held by the Russians, who posted a 3:19.16 at the Vladimir Salnikov International in December of 2009. Here is how the race was done—

In the summer of 1953 a group of Hungarian women would be the first to be recognized as the WR holders in this event. Swimming 5:10.8, and then twice lowering it 5:07.8 in the months that followed, they would soon be bested by a team from France, and then the Netherlands before the year was out.

In the 60’s and early 70’s the Americans put their mark on the event, breaking it no fewer than 9 different times with a variety of swimmers. The last in that line was done at the Munich Games in Germany in 1972, in a time of 4:20.75.

The East Germans would shave over 15 seconds off that mark in the course of the following 12 years, with heavyweight names like Ulrike Richter, Barbara Krause and Birgit Meineke swimming on teams that would also often set WR’s on the lead-off backstroke legs.

Jenny Thompson, Anita Nall, Lea Loveless and Crissy Ahmann-Leighton would take the record back in 1992 at the Barcelona Games in a time of 4:02.54. Eight years later Thompson would group with another set of women – Dara Torres, Megan Quann and Barbara Bedford to win gold in Sydney and also dip below the 4 minute barrier for the first time (3:58.30).

The current world record in the LCM 4x100m medley relay for women is held by the Americans. They posted a time of 3:52.05 at the London Olympics in 2012. Here is how they split the race—

The current short course world record in this event is also held by American women, with some of the same women (Franklin swims freestyle instead of backstroke on this one).

Here is how the split the race, which was done at the 2011 Duel in the Pool in Atlanta, Georgia—