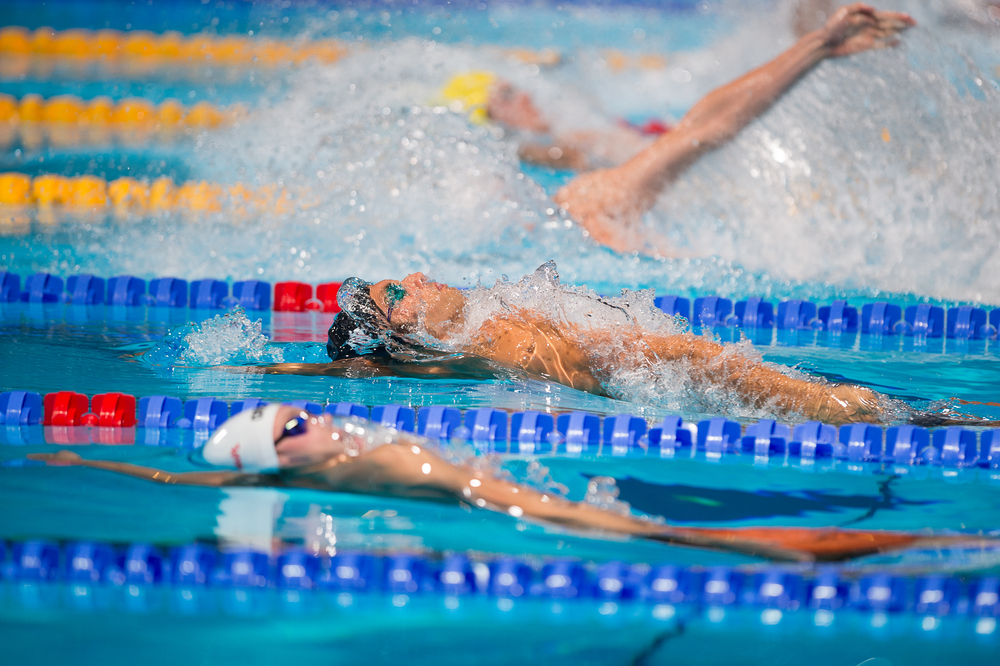 Backstroke is unique in that it is the only stroke of four in competitive swimming to be performed on the athlete’s backside, unlike the crawl which is done on the athlete’s front, facing the bottom of the pool. It is also the first event to be competed at the Olympic level which wasn’t crawl (freestyle).

One of the oldest Olympic events, it was first done at the Games in Paris during August of 1900. The winner was Ernst Hoppenberg of Germany in a time of 2:47, a full 8 seconds faster than silver medalist Karl Ruberl of Austria.

The first WR on record is East Germany’s Roland Matthes, who swam a 2:02.82 at the Munich Games in 1972 to win gold. Four years later John Naber of the United States would be the first to break the two minute barrier in this event, swimming a 1:59.19 at the Montreal Games in 1976. That time would stand up for 7 years before Rick Carey would shave a few more tenths off at the Olympic Trials for the US in 1984.

After the record was held by the Soviet Union’s Sergei Zabolotnov and Igo Polyansky, Spanish backstroke legend Martin Lopez-Zubero would lower the mark twice in 1991, swimming a 1:57.30 and 1:56.57. Another 8 years would pass before American domination would ensue, with Lenny Krayzelburg, Aaron Piersol, and Ryan Lochte all taking swipes at the WR. Piersol in particular would put his stamp on it 7 different times, being the only swimmer ever to break 1:52 in the event.

Piersol’s time of 1:51.92, swum in 2009 at the FINA World Championships is the current world record for men in long course meters.

On the short course side of things, many of the same names make appearances. Lopez-Zubero is the first name on record, with a 1:52.51 done in 1991. Piersonl, Lochte and Krayzelburg all appear in the list of swimmers to break the WR, with Lochte in particular being the first to cross the 1:50 barrier when he swam a 1:49.05 in Shanghai in 2009.

Since then, however, swimmers Markus Rogan of Austria, George Du Rand of South Africa, and ultimately Arkady Vyatchanin of Russia would all take turns at it, with Vyatchanin’s time of 1:46.11 done at the Berlin stop on the FINA World Cup circuit standing up as the current WR in short course meters.

The 200m backstroke was swum for the first time on the ladies side in 1968 at the Mexico Games. It was a North American affair on the medal podium, with Lillian Watson (USA) winning in 2:24.88, Elaine Tanner (CAN) in second, and Kaye Hall (USA) placing third.

Although not competed at the Games until ’68, the WR mark goes back as far as 1957, with Phillipa Gould of New Zealand being the first name on record in a time of 2:39.9. Satoko Tanaka of Japan would firmly put her name all over the WR starting from 1959 until 1963, during which time she would lower her own world record 10 times, ultimately to 2:28.2.

Predictably during the 1970’s a rash of East German swimmers including Ulrike Richter (who features prominently in the list of women 100m backstroke world record breakers), Birgit Treiber, Antje Stille, Rica Rienisch and Cornelia Sirch each breaking the WR. Sirch, in particular, would be the first woman to break 2:10 when she did so at the FINA World Championships in August of 1982 in Ecuador.

Hungarian backstroke sensation Krisztina Egerszegi, who would dominate both backstroke events for an extended period of time in the 1990’s, would destroy the WR in 1991 swimming a 2:06.62 (by nearly two full seconds), a time that would last for 17 years.

Currently Missy Franklin of the United States of America has the world record for this event, in a time of 2:04.06 that she swam at the London Olympics in 2012.

Franklin is also the current world record holder in the short course meters edition of this race. She swam 2:00.03, breaking Japan’s Shiho Sakai’s two-year-old mark of 2:00.18 at the Berlin stop on the FINA World Cup Circuit in 2009.